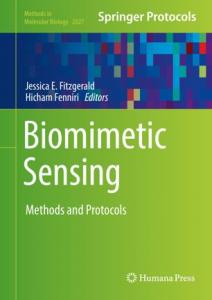 ChE Professor Hicham Fenniri has been elected as a fellow of the American Institute of Medical and Biological Engineering (AIMBE) for his exceptional achievements and significant contributions within the medical and biological engineering fields.

ChE Professor Hicham Fenniri will be the Co-Chair of the Molecular Machines conference San Diego in August 2018.

Prof. Hicham Fenniri’s Article is Top 10% Most Cited in PLOS ONE

Prof. Fenniri’s 2014 article “Widespread Nanoparticle-Assay Interference: Implications for Nanotoxicity Testing”, is in the top 10% most cited papers of PLOS ONE. PLOS ONE is a peer-reviewed open access scientific journal published by the Public Library of Science (PLOS) since 2006. The journal covers primary research from any discipline within science and medicine.

Northeastern had the highest number of presentations by faculty and students ever at the World Biomaterials Congress held in Montreal from May 17-22, 2016.

ChE professor Thomas Webster and Hicham Fenniri were awarded a patent for using “Nanotubes and compositions thereof” on the surfaces of implants.

For the last two decades, it’s been said that carbon nan­otubes hold the promise to trans­form a range of fields, from alter­na­tive energy to drug delivery. But making that happen has proved dif­fi­cult, according to Hicham Fen­niri, an inter­na­tional leader in nan­otech­nology and new pro­fessor in Northeastern’s Col­lege of Engi­neering. “Carbon nan­otubes are fas­ci­nating mate­rials,” said Fen­niri, […]