Northeastern University is collaborating with Hanscom Air Force Base on a $2.8M grant on a first-of-its-kind radio-silent drone testing facility at Innovation Campus in Burlington.

BURLINGTON, Massachusetts—Northeastern formally opened a state-of-the-art research facility at a ribbon-cutting ceremony on Monday that was attended by military and business leaders who will partner with the university in cyber-security testing on drones.

The Air Force Life Cycle Management Center is providing a $2.8 million grant to fund research through its unit at Hanscom Air Force Base, which is a short drive from Northeastern’s Innovation Campus in suburban Boston. The collaborative partnership between Hanscom and Northeastern enables the Air Force to adapt to the rapidly changing commercial market for autonomous and unmanned aircraft systems, known as UAS.

“This is the future,” Colonel Timothy Lawrence, director of the Information Directorate at the Air Force Research Laboratory, told the ceremony audience. “Right now, counter-UAS is a huge problem … having Northeastern—with this facility—work this problem is what the nation needs.”

The ceremony was attended by Congresswoman Lori Trahan of Massachusetts, who serves on the House Armed Services Committee, which crafts the budget for the Department of Defense, as well as the Subcommittee on Intelligence and Emerging Threats and Capabilities. Her presence underlined the need for cyber-security measures to deal with the threats of the drones of potential adversaries operating within the U.S.

“Fundamentally, we are celebrating the power of partnership,” Trahan said. “We need to make sure that the Defense Department is leveraging the incredible talent pool and capability that we have here in Massachusetts to create innovative solutions for a real-world application.”

The $2.8 million grant from Hanscom Air Force Base will enable Northeastern and other industry partners to rapidly assess and develop new drone technologies emerging from the commercial marketplace. Northeastern and the Air Force plan to build upon this spirit of collaboration by creating a DevOps center.

The facility has the futuristic aesthetics of a science-fiction movie. Its walls, floor, and ceiling, which measure 50 feet by 50 feet with 22 feet of headroom, are lined with hundreds of blue protruding arrowheads, made of foam, which are designed to absorb radio frequency waves. They transform the square room into an anechoic chamber that will enable Air Force and private researchers to join with Northeastern and other universities in the creation of defenses against potential drone attacks. 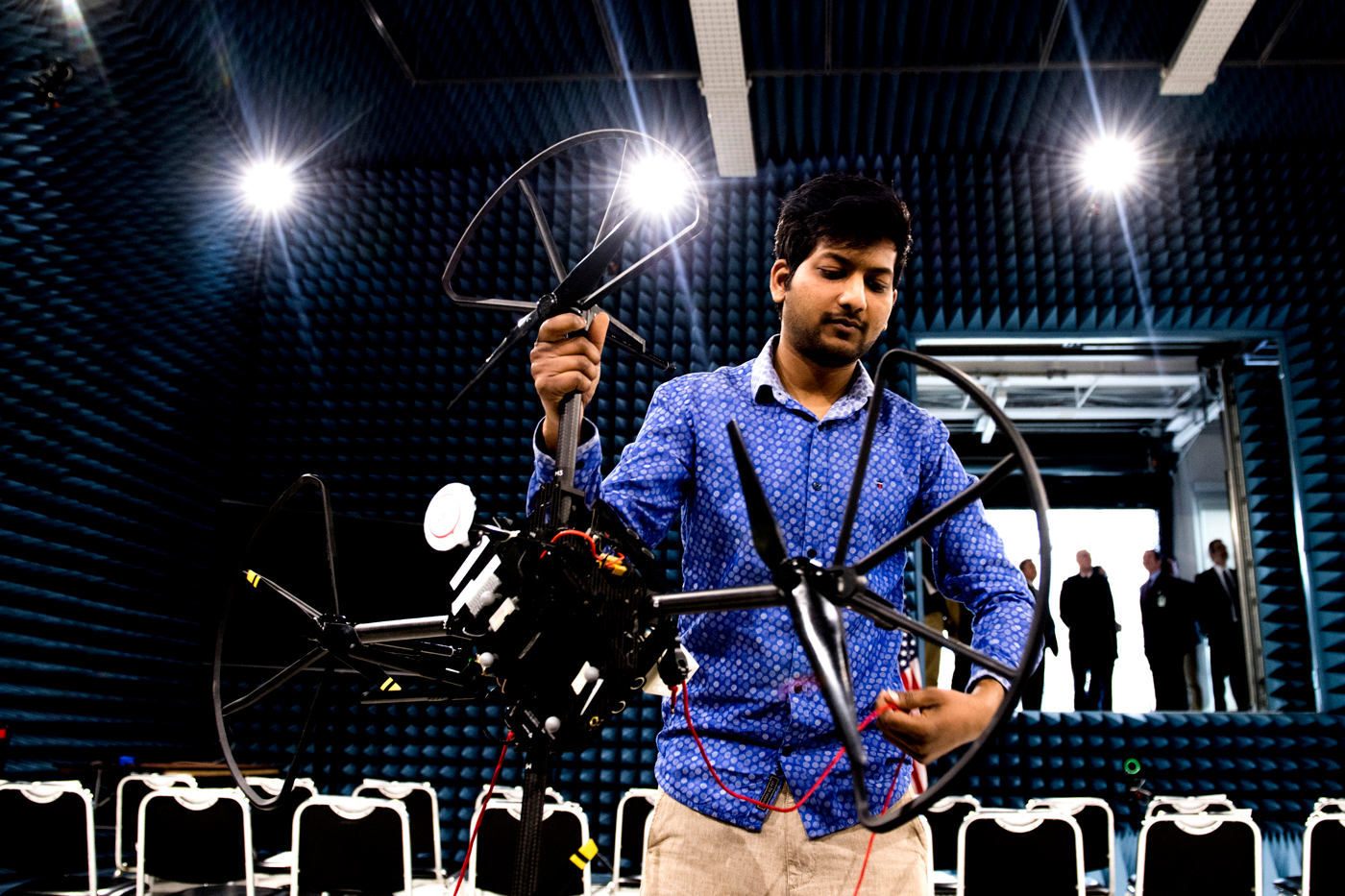 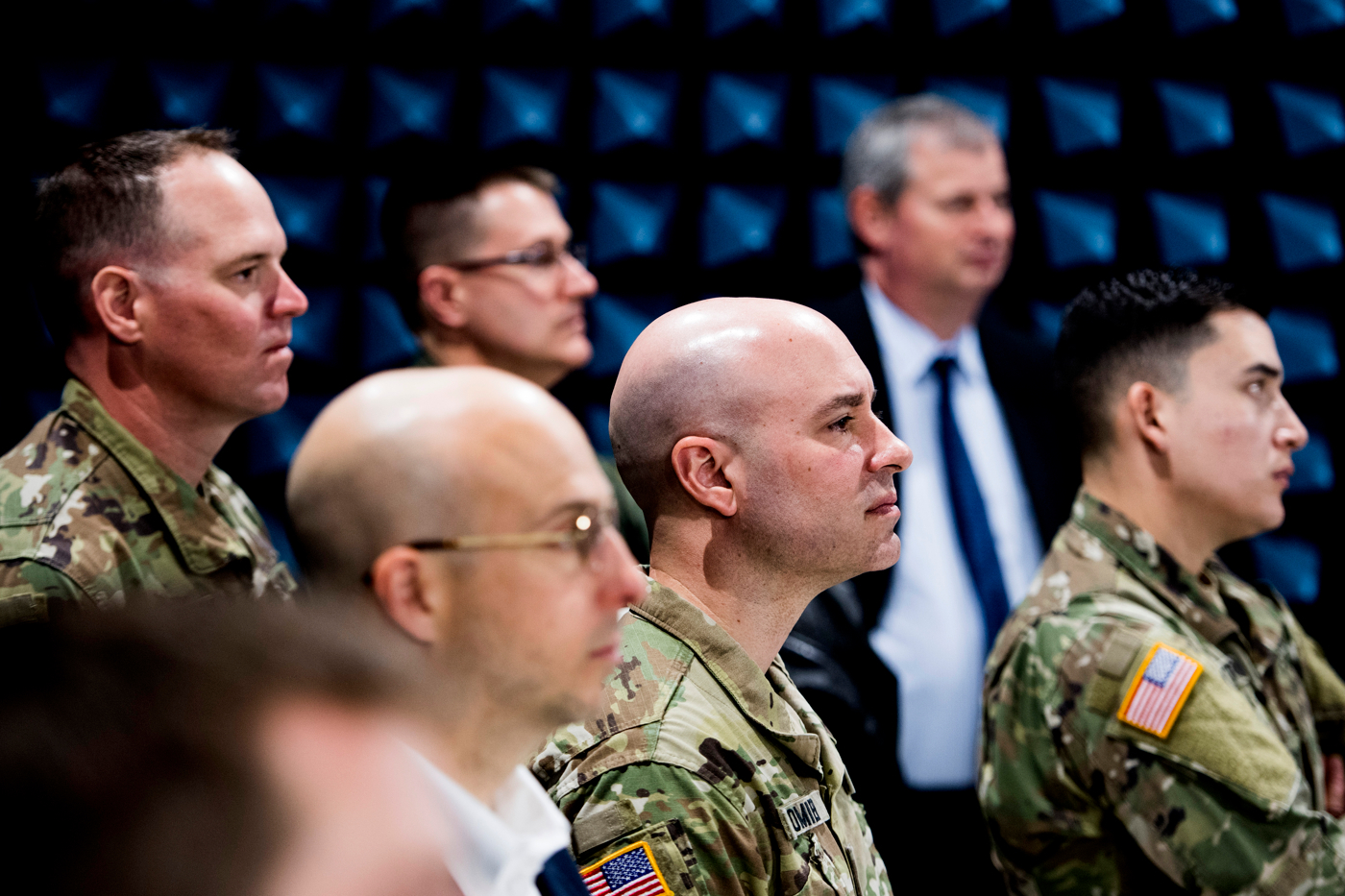 In a demonstration, the indoor facility was used to jam a drone’s signals. Photos by Matthew Modoono/Northeastern University

On Monday, the flooring was installed to enable the ceremony to be held within the facility, which is also encased with a Faraday cage of conducting material that creates an electromagnetic shield. Attendees watched a demonstration of a drone’s signals being jammed.

“That absorption and isolation enable us to do things in a very quiet environment, so the world does not affect the experiment,” said David Luzzi, vice president for Northeastern’s Innovation Campus and vice provost for research innovation and development. “But also we can do things inside that will not affect the world.”

The indoor facility is connected to a netted enclosure outdoors, measuring 150 feet by 200 feet, which is large enough for GPS testing. Drones can be navigated in and out between the two areas for seamless exercises in all conditions.

“When you have companies like [the Russian arms producer] Kalashnikov starting to advertise drones systems which carry explosives for the world market, we now are faced with the prospect of drones that can fly 40 miles and suicide-attack with explosives,” Luzzi said. “Obviously, counter-UAS is extremely important.”

The new facility, which is the first of its kind in the United States, is housed in a renovated building that once bore little resemblance to what it has become.

“Believe it or not, this was a traditional high school-like auditorium, with a stage and seating for a few hundred people,” Luzzi said. “We saw this as a tremendous canvas on which to paint this capability. The university invested serious dollars in terms of reinforcing the frame of the building, so it could support the structure.

“And then the Office of Naval Research purchased the very sophisticated equipment that is enabling this facility to truly push the frontiers of our understanding of expeditionary cyber, including handling electromagnetics and cyber over a very large frequency range; effects on navigation; effects on global positioning signals, and how those can be corrupted at the expeditionary edge.” 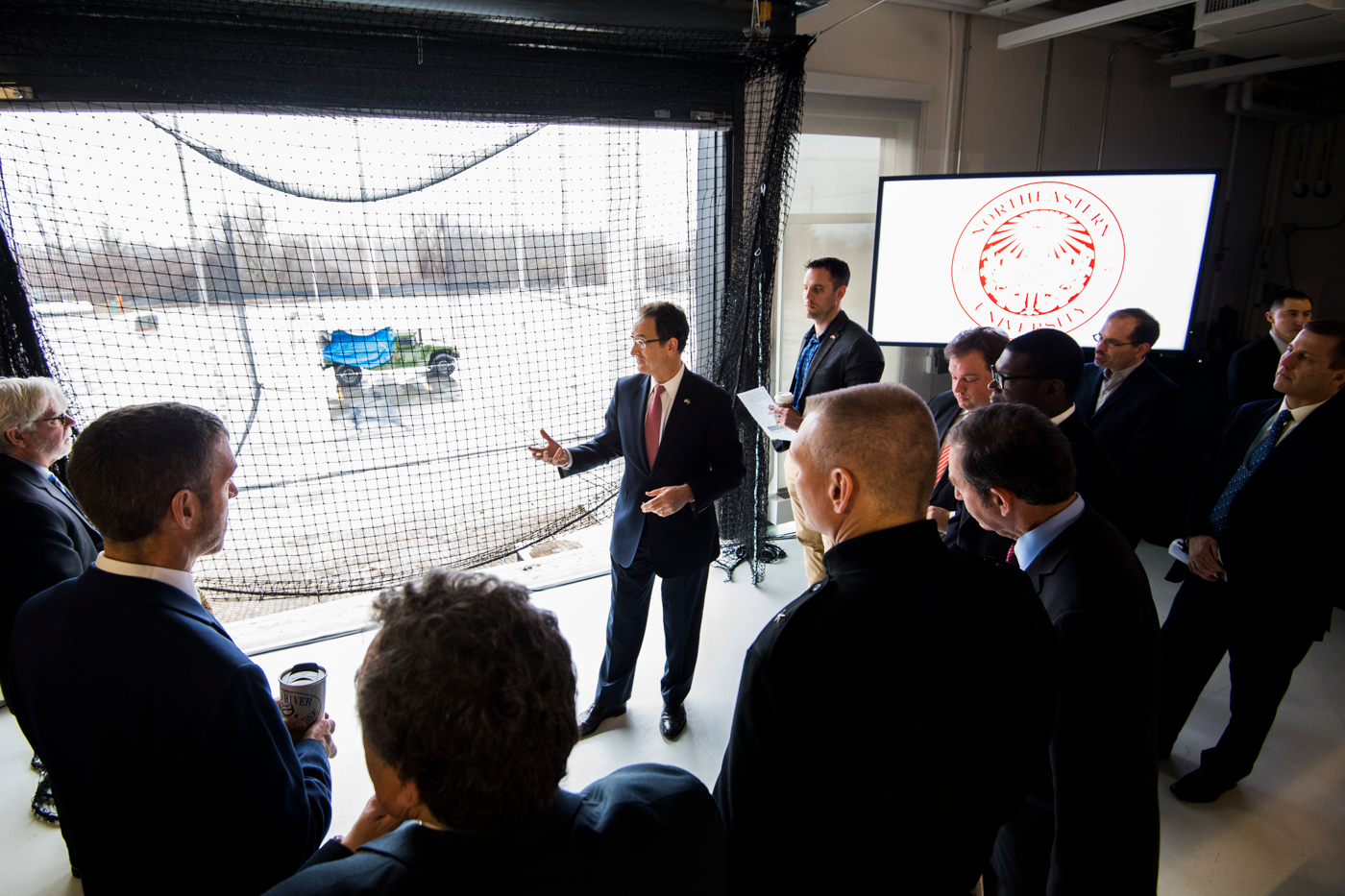 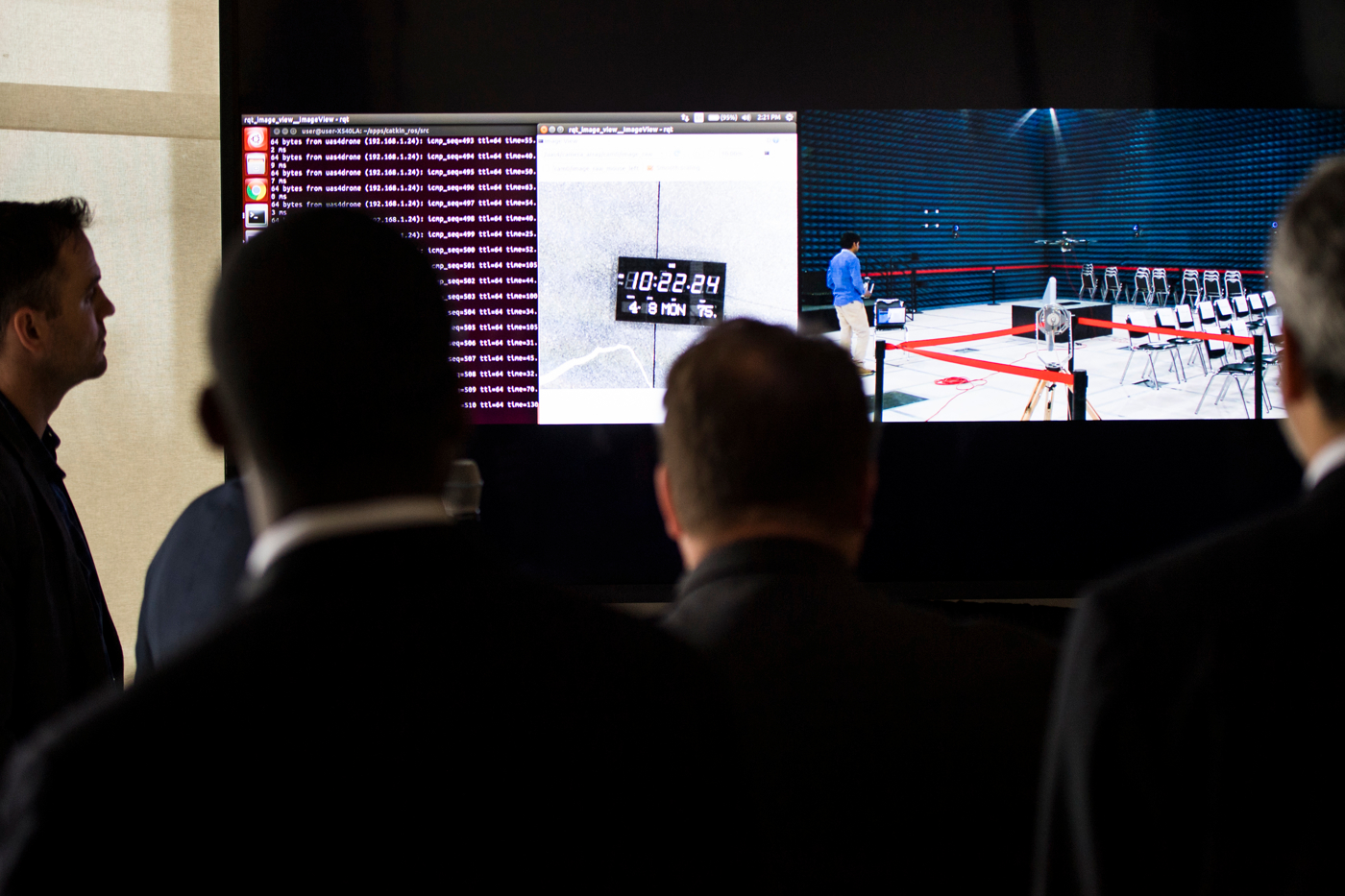 Northeastern’s Innovation Campus in suburban Boston is anchored by the George J. Kostas Research Institute for Homeland Security, which fosters collaborative research aimed at helping communities, critical systems, and infrastructure withstand, respond to, and recover from catastrophes. Researchers in the labs and centers at the institute conduct research in areas such as security, nanoscale printing, and structural testing for buildings and bridges. Last year, the Army Research Laboratory located its Northeast regional hub at the Kostas Research Institute.

“The whole purpose of this campus is to build a high-trust environment where government, industry, and universities can come together to work on problems of importance to national Homeland Security and to the future of the nation,” Luzzi said. “Facilities like this tend to be available only behind fences. And it’s very hard to get that broad base of talent, that broad set of companies, through those fences to contribute to national and Homeland Security. So we are very excited to be able to launch this.”