Northeastern University Launches the Institute for the Wireless Internet of Things 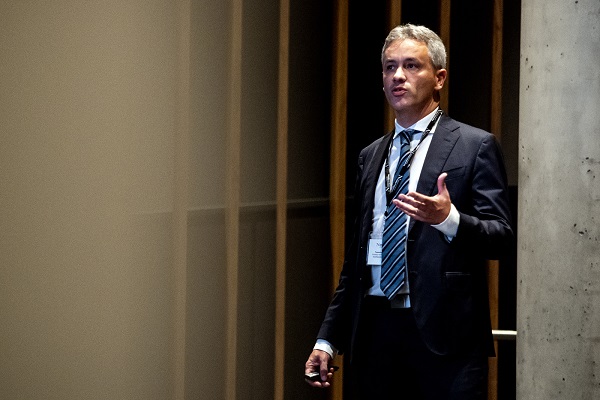 It’s the interface that allows people to connect the physical world with the cyber world, using autonomous wireless networks, systems, and devices that tackle some of the world’s most important problems, said Tommaso Melodia, Northeastern’s William Lincoln Smith Chair Professor of Electrical and Computer Engineering.

To seize the potential of the wireless spectrum, Northeastern launched the Institute for the Wireless Internet of Things on Friday at the Interdisciplinary Science and Engineering Complex. The new institute will drive advances to change the way people are connected worldwide, Melodia said.

“The internet of things is a number of different things, but it is certainly new ways to perceive the physical environment,” said Melodia, who is the director of the new institute. “The work we do is on the autonomous wireless network systems of tomorrow, innovating on certain challenging areas where wireless connectivity is an important issue.” 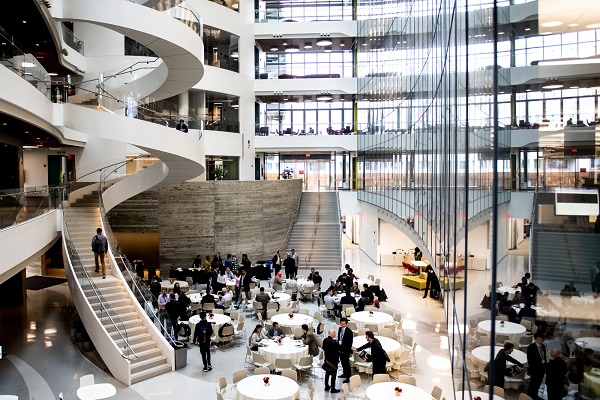 The Inauguration of the Institute for the Wireless Internet of Things in the Interdisciplinary Science and Engineering Complex. Photo by Ruby Wallau/Northeastern University

The new institute will combine a diverse set of expertise in sensors, energy harvesting, communications and networking, data analytics, and artificial intelligence, from over 100 Northeastern researchers who study topics ranging from cybersecurity to marine science. These researchers will also collaborate with other universities, industry, and government entities. It’s what the next generation of wireless technologies will need, Melodia said.

“What is unique is that we’re trying to bring all this expertise together and apply it to a number of technological challenges in a number of areas,” he said. “Including smart cities and communities, smart oceans, connected vehicles and drones, the internet of medical things, and industrial automation [or industry 4.0].”

With this expertise, the institute will drive innovation in systems networks and artificial intelligence to transform the way society is connected, said David Luzzi, senior vice provost for research and vice president of Northeastern’s Innovation Campus. Although the idea of digitizing and connecting the world is still a work in progress, he said, there is a tremendous amount of research that needs to be done.

“[These researchers] are putting the university on their back and running to the future,” Luzzi said. “This is all about an interdisciplinary and differentiated approach to go into the future, which is our genetic code and hallmark at Northeastern.”

The institute launches a month after the National Science Foundation and the Defense Advanced Research Projects Agency selected Northeastern to run a massive data center named Colosseum, which is the world’s most powerful emulator of wireless networks.

“Colosseum can create virtual worlds,” Melodia said. “It’s a computation capability with which you can emulate a smart city where a number of wireless devices and actors can interact with one another.” 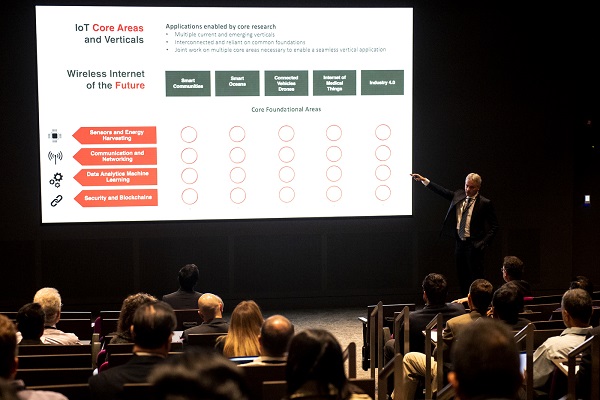 10/18/19 – BOSTON, MA. – Tommaso Melodia speaks during the Inauguration of the Institute for the Wireless Internet of Things in the Interdisciplinary Science and Engineering Complex on October 18, 2019. Photo by Ruby Wallau/Northeastern University

Using that support to design and develop the wireless technology of the future is critical in keeping up with the burgeoning pace of the internet of things, said Erwin Gianchandani, acting assistant director for computer and information science and engineering at the National Science Foundation.

Gianchandani has worked with Melodia and other Northeastern wireless technology researchers in the Platform for Advanced Wireless Research initiative, a $100 million public and private initiative co-led by Northeastern and US Ignite, Inc.

“The great work [this team] has been doing has not only helped the NSF with some of our critical programs, but it really has helped position Northeastern as a US and global leader when it comes to wireless networking,” Gianchandani said.

As part of the launch, faculty researchers from the institute presented their latest research to  operate wireless technology in complex, challenging, and sometimes contested environments.

“There are so many new things outside the traditional teaching of engineering that will come from the wireless internet of things,” said Jacqueline Isaacs, interim dean of the College of Engineering. “And they’re growing these new forces.”