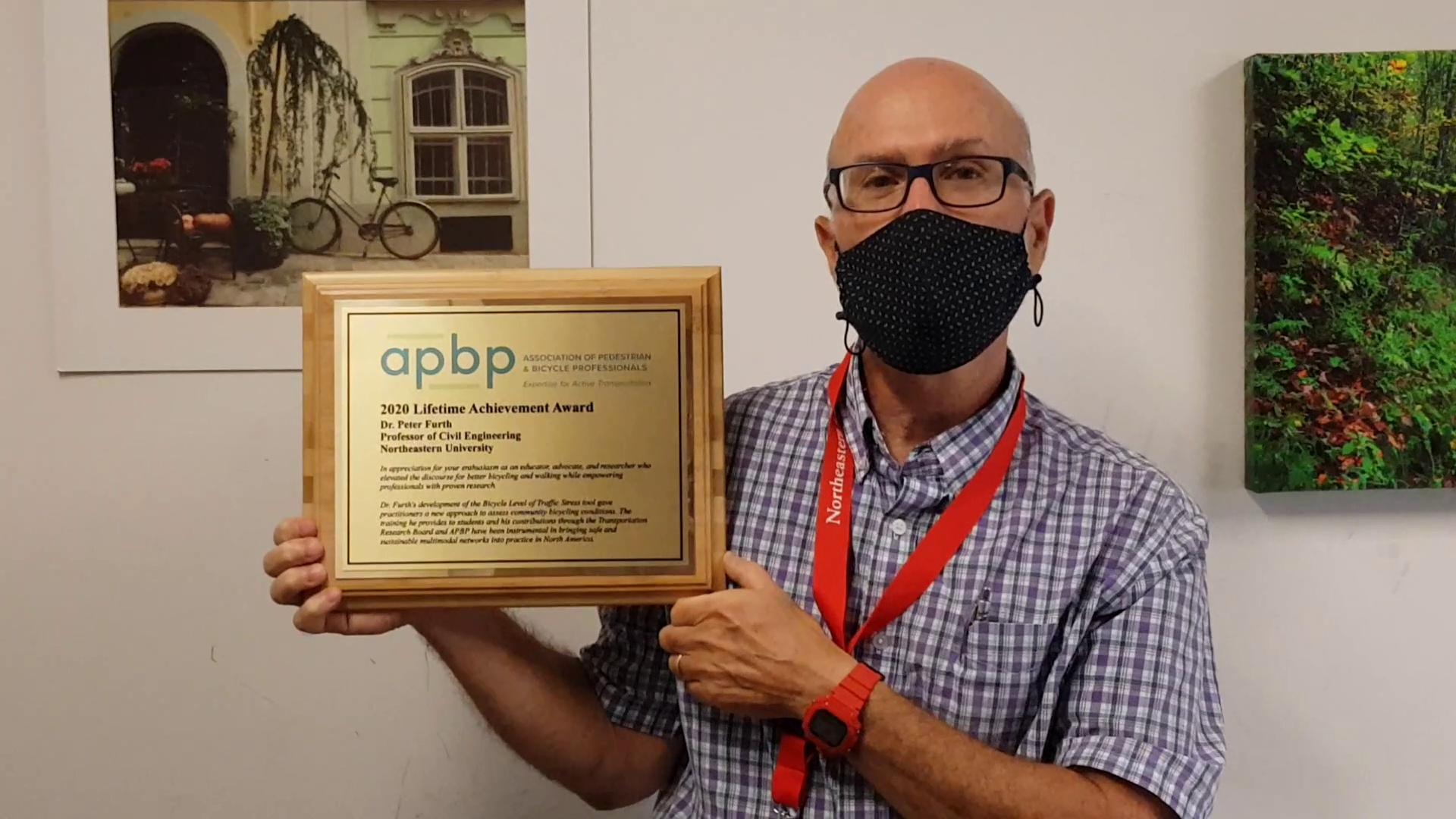 Peter Furth, Professor of Civil and Environmental Engineering, was awarded the 2020 Lifetime Achievement Award by the Association of Pedestrian & Bicycle Professionals (APBP). The award was conferred for Furth’s “enthusiasm as an educator, advocate, and researcher who elevated the discourse for better bicycling and walking while empowering professionals with proven research.” The APBP is a US-Canadian organization aimed at improving the walkability and bike-ability of urban spaces.

Furth is a leading voice in the effort to improve transportation systems in the US and make cities more friendly towards bicycles and pedestrians. His pioneering work developing the Bicycle Level of Traffic Stress was a main driver behind his being honored with the award. “Dr. Furth’s development of the Bicycle Level of Traffic Stress tool gave practitioners a new approach to assess community bicycling conditions,” the award stated.

Engineers and Policymakers have long tried to improve the bike-ability of cities. For many of the past decades, these efforts were limited to striping bike lanes on existing roads. However, not all bike lanes are created equal. “Some bike lanes are on relatively quiet streets, not next to parking,” said Furth. “Those are nice to ride in.” But on roads with multiple lanes of traffic, high speed limits, busy intersections, or cars parked along the curb that could open their doors at any moment, riding in a bike lane can be stressful, to the point that many people will leave their bike at home rather than ride in them. Investing in bike lanes that nobody wants to use serves nobody.

To help cities focus on making bicycling improvements that really work, Furth released in 2012 his Bicycle Level of Traffic Stress model. “What my method did was say: ‘it doesn’t matter whether there is a “bike facility” or not, but how protected from traffic you are’,” explained Furth. “Some bike lanes are low stress, and some are high stress. And some streets without any so-called bike facility – such as common local streets – are low-stress. What people care about, and what planners should focus on, is whether there is a low-stress route from their homes to their destination.”

The system has two components. The first is a 1-4 rating scale for traffic stress. A road with stress level 1 would be one that a child would feel comfortable riding on. Level 2 would be suitable for the mainstream adult population. Level 3 is reserved for those in the biker community known as “enthused and confident”: they like to ride, have experience doing so, and can perform more complicated traffic maneuvers, such as merging with traffic when needed. Level 4 roads are for the “strong and fearless,” the tiny fraction of the population that will ride with any level of car traffic. “Level 4 is practically useless,” Furth said. “Level 3: maybe 8 percent of the population will put up with that, but level 2, now that’s something that the mainstream population will put up with.” The second component of the system is network analysis. Engineers review the roads in a city and rate them using the established scale. If a city’s housing areas and business areas can all be connected via Level 1 and 2 routes, then a city has an adequate bike network.

Furth released his new model in 2012, and within a few years, those doing bike network planning for cities started to switch to his method. It changed everything about how bike networks were being planned, shifting emphasis from how many miles of bike lane were completed to how many people have a low-stress route to their work and other destinations. He had invented a whole new field. His model revealed how cities are divided into a large number of “islands” of level 1 and 2 routes separated from one another, connected only by Level 3 and 4 routes. “For instance, we did an analysis for Boston in 2017, and the answer was: from homes, you can get to 1.3% of jobs using low stress routes,” Furth said. Thus, there exists a natural risk limit to how much the bike population will grow until the low-stress bike network becomes better connected. Many engineers and policymakers now use the Furth method to rethink their route designs and build safer, more appealing routes. “This was a backdoor way for me to get Americans to adopt Dutch standards for bikeways,” he recalls. “They work, in that they get everyone out there riding.”

In addition to his pioneering work on the Bicycle Level of Traffic Stress model, Furth was also recognized for his commitment and innovation as an educator. “The training he provides to students and his contributions through the Transportation Research Board of APBP have been instrumental in bringing safe and sustainable multimodal networks into practice in North America,” the award states. Each summer, Furth teaches a Dialogue of Civilizations course in the Netherlands. There, he introduces students to new methods of transportation engineering not commonly in use in North America and challenges students to imagine a safer, more sustainable transportation system in the US. As word of his course got out, soon professors from other institutions were participating in the Dialogue in order to study the course’s format and replicate it. In this way, not only Northeastern students but also students from other universities across the US and Canada have been introduced to Dutch sustainable transportation planning practices and are helping to transform the industry away from its car-centric past toward a safe, sustainable, and people-friendly future.