An Opportunity to Discover my Homeland 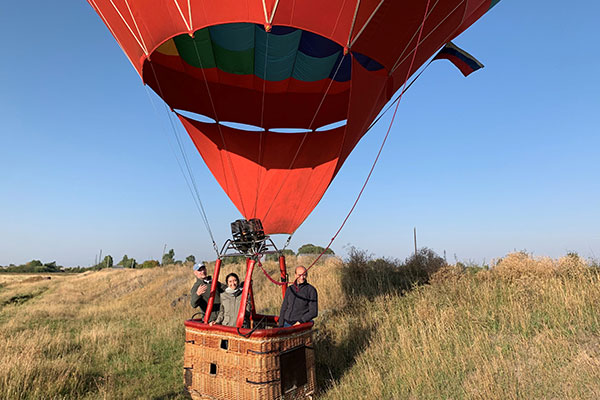 Elise Papazian is a fourth-year BS student in Environmental Engineering from Rhode Island. She completed her first co-op at a civil engineering firm called The Morin Cameron Group in Danvers, MA, and is currently on co-op in Armenia at Optimum Energy working on the design and construction of solar plants. She plans to complete a third co-op next fall. In this article, she describes her global co-op experience.

An Opportunity to Discover my Homeland

After my first year of college studying engineering at a small liberal arts school in Maryland, I decided I needed something bigger and better. A rigorous engineering program with diversity in classes, electives, students, concentrations, and experiences. That’s the kind of program I’ve found at Northeastern. I never imagined it would take me across the world.

After an incredible first co-op experience at a civil engineering firm The Morin Cameron Group learning the logistics and processes of land development near Boston, I felt encouraged to branch out for my second co-op. I intended to look on the West Coast but set up a meeting with Sally Conant (a global COE co-op coordinator) to briefly talk about options overseas. I really had my heart set on the West. The first thing she said to me when I sat down in her office was “are you Armenian?”—my last name always gives me away. She, also being Armenian, began to tell me about the kinds of job opportunities in Armenia, and put me in touch with all the right people. If not for that meeting, I never would have ended up in Armenia working at Optimum Energy on co-op. 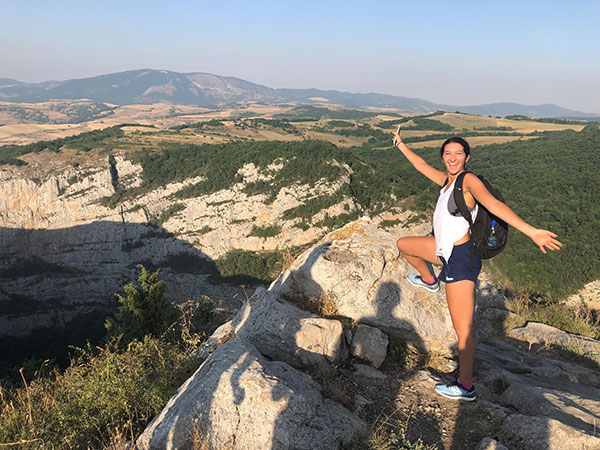 Elise has immersed herself in Armenia’s extensive nature and mountainous terrain.

This is not my first time in Armenia. However, living and working here these past four months has been entirely different than my first two-week vacation here over six years ago. I saw this co-op as not only an opportunity to gain knowledge and experience in a new concentration of engineering but also to discover more about my culture and homeland in the process. My ancestors left this region over 100 years ago, fleeing genocide, and my family has not taken up roots here since. This place was unfamiliar at first, as I did not know the language and the Armenian American culture is a bit different. Being able to work in the exciting field of solar energy while engaging with locals and traveling to all regions of the country has brought me my own entirely new Armenian identity. 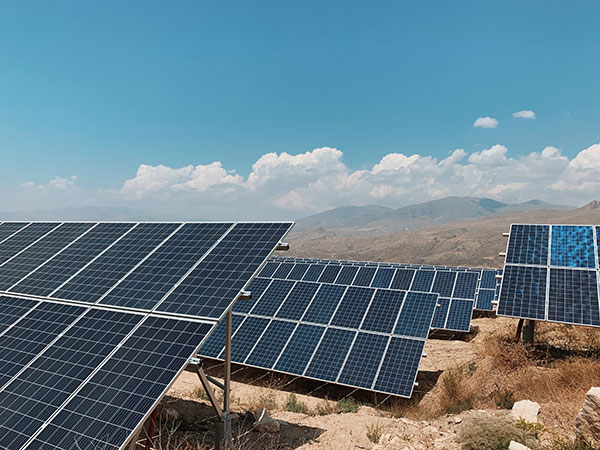 Elise is part of the design and construction team of new solar plants in Armenia.

I am completing my co-op in Armenia with Optimum Energy, a small private firm developing some of the first large scale solar projects in the country. It was only recently in 2016 that the Armenian government distributed licenses for the first grid connected solar power plants to be constructed. With limited resources, climate change, and constant political turmoil in the region, energy independence is increasingly more important for our small nation. Although Yerevan is one of the oldest inhabited cities in the world (2801 years!), this independent nation of incredibly hardworking people is young and developing rapidly. During my time here, I have been on a team responsible for the design and construction of these new solar plants. Among these are a 5 MW plant with the first solar tracking panels in the country, and a rooftop system with the first bifacial panels. I have been involved in every phase of various projects from land acquisition to monitoring the efficiency of newly built plants. This includes initial structural/electrical CAD design, running simulations for investors, and numerous stages of construction. The work is constantly changing, with equal days in the office and in the field. With projects in almost all the eleven regions, I have been fortunate to see many places in this breathtaking country. It has been such an incredible experience to be a part of this growing sector in a region with large solar energy potential.

The 30-hour workweek in Armenia has allowed me time to volunteer with Armenia Tree Project, a non-profit dedicated to sustainably reforesting the nation. After the devastating energy crisis in the 90’s that led to severe deforestation, the organization was founded to replant and protect Armenian trees and forests. This is done through education, community engagement, and plantings from their own nurseries. I was able to participate in their inaugural Forest Summit last month, an event drawing international participants and forestry experts to discuss methods of doubling Armenia’s forest cover by 2050. I was in the presentation room when Armenia’s Prime Minister, Nikol Pashinyan, delivered a speech pledging the government’s financial support and direct participation in reaching this forestry goal. We are approaching peak tree planting season this month, and I’m looking forward to joining the efforts with ATP workers and local community members. 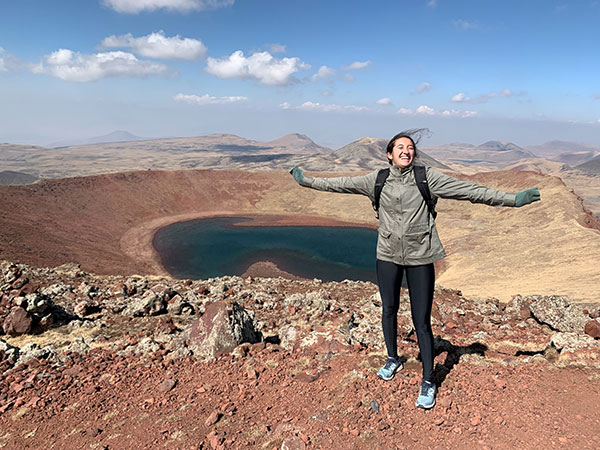 Elise has hiked up the dormant volcano Azhdahak, the highest peak in the Ghegam Mountains at 3,500 m.

Choosing to participate in Northeastern’s global co-op program is the second-best decision I’ve ever made, ranking just behind my decision to transfer to Northeastern two years ago. Like Armenia, I am discovering my love of the renewable energy field; work I hope to continue in my next co-op and future career. On days when I volunteer with ATP, I am in the rural villages, caring for seedlings with the magnificent Mount Ararat cutting into the horizon. On weekends I have immersed myself in Armenia’s extensive nature and mountainous terrain, including a hike up the dormant volcano Azhdahak, the highest peak in the Ghegam Mountains at 3,500 m. I have flown over the cities of Gyumri and Yerevan in a hot air balloon festival celebrating the 28th year of Armenia’s Independence, and seen more ancient monasteries than I can count. I have learned the language and alphabet of my ancestors and eaten both new and familiar cultural dishes. These past four months I have learned more about myself and my Armenian heritage than I could have imagined. I will leave in December, but I know I will be back very soon.