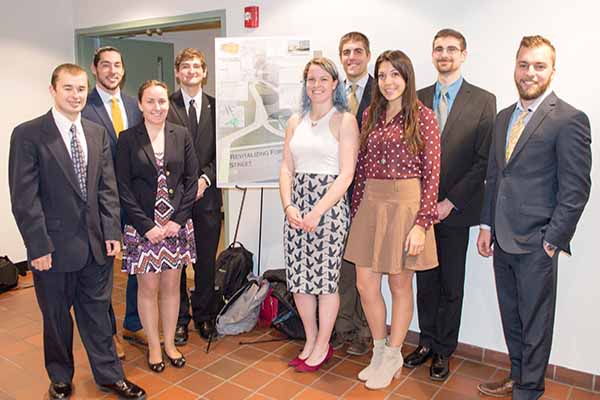 Written by Sarah Ebaugh (center in photo) who is a recent BS in civil engineering graduate from Northeastern.

During Sarah’s years at Northeastern, she was a part of the student chapter of American Society of Civil Engineers, which included the role of webmaster during her senior year. Sarah completed three co-ops, two in Massachusetts and one in New Jersey in land development, water resources, and traffic engineering so that she could try out every part of civil engineering. She focused mainly on transportation throughout her classes as well as her senior design project; however Sarah is now working at vhb in Watertown, Massachusetts in the land development department doing site design. Outside of school, Sarah enjoys biking, reading, and going to concerts around Boston.

After being in college for 5 years (and if anyone tries to tell you that you should’ve done a 4 year program, laugh in their face. That extra year is the best buffer between college and the real world!), I was ready to finish my final semester. Luckily, with how my schedule worked out, I was able to take capstone and a public speaking elective. Since my classes were focused in transportation, I took the transportation-focused capstone with Dr. Dulaski as an advisor. If anyone has had him before, especially in highway design, you know that he sets high standards for his students, and it was no different with capstone.

To briefly explain, capstone is a 14 week project that encompasses all of the knowledge you’ve learned from classes and co-ops. It’s put together as if your team is a full-fledged design consulting firm for the city or town the project is located in. I recommend looking up some old projects, especially in transportation, because they’ve gotten a ton of press before and some have been expanded on and built in real life!

When the class started, there were five projects that each six member team could bid on. One vaguely described project was for Forsyth Street on Northeastern’s campus. The class was unsure of the exact scope, and we only knew that it would involve working with two structural engineering students and one industrial engineering student. Since that translated to more work for us, no team ended up bidding on it in the first round.

Fast forward a couple weeks, and my team (picture above) was chosen to collaborate with the other engineering students for the first interdisciplinary capstone at Northeastern. We learned that we had the opportunity to redesign Northeastern’s campus to fit the students’ needs. Something that could be built by the students, and for the students. Each week, our entire team would meet with Dr. Dulaski to go over design options, what was feasible in the area, what Northeastern wanted, what WE wanted, etc. etc.

Now picture nine students plus one faculty advisor in a tiny room with ten differing opinions at every single step of the process. It gets confusing, frustrating, and mind-opening to see how everyone interacts and communicates and even more interesting to see how that all changes over the 14 weeks. With each step of our final product (a report that ended up being 350 pages plus 650 pages of appendices, and a planset of transportation and structural plans), there were jobs that needed to be distributed, ideas that needed to be settled on, and work that needed to be done. From this experience, I’ve come up with a few lessons for people going into capstone.

Know when to stop. This is an essential part of completing a project scope this large within 14 weeks. At the beginning of the semester, our team could have argued about specific dimensions of a bike lane (4’ one way? 5’ one way? Two way? Next to sidewalk? Buffer between the sidewalk?) for hours. And we DID. But going through, you realize which decisions are minor and can be immediately decided on, like the bike lane argument, and more major ones, like how you’re going to ensure ambulances can still access the school. You become better at realizing which is which from the beginning, so be patient, but keep it in mind. Is this important to decide on right now? Or can we make an interim decision just to move forward and get back to it?

Listening is just as important as speaking up. One lesson I feel like teachers and adults were constantly trying to push on me was to speak up. Personally, growing up, I’ve never been a huge talker. I tend to sit back in class discussions and hear what everyone has to say. If I feel like my idea is good enough, or different enough from what someone else has said, then there’s a small chance I MIGHT speak up, but odds are I’m just sitting there listening. It’s been something I constantly worked on through high school and college. Even more importantly now after graduating, I’m working on being able to coherently voice my ideas and opinions. It’s important to learn to speak in a way where people actually listen to what you’re saying. If you’re like me and tend to be on the quieter side? Work on this. Work on speaking up.

BUT, if you’re the complete opposite of this where you like to voice every opinion that pops into your head? Also heed this advice. Knowing when to stop talking is just as important, if not more important, than when to speak up. Ten people talking over each other, interrupting each other, and only debating about why their idea is the one that would work gets you nowhere. Be aware of when someone is presenting an idea, and listen first. Then speak.

Know your strengths. With all the work we had to do with this capstone, it was obvious that tasks would be delegated among the team members. The structural engineers, Julieta and Ellis, took on the role of the pedestrian bridge connecting the bike and pedestrian paths on Forsyth Street to the rooftops of existing buildings on campus. The industrial engineer, Adam, worked on routing the buses around Forsyth Street and the impact it would have on other public transportation in the area. The rest of us, Steve, James, Larry, Marina, Andrew, and I, focused on transportation design. Even within that, roles were broken down for report figures, report writing, CAD drawing, and renderings.

Before entering a group project of this scale, know where you can play up your strengths. Since I had the most experience with reports and memos for projects on coop, I took over most of the report writing and formatting for the entire project. I was also able to provide quality control (QAQC) for the CAD plans because I had a fresh set of eyes, since I wasn’t constantly working on the drawings. By presenting those skills to your group and your project manager, it takes away the stress of trying to divide things up for everyone to work on.

Take breaks & have fun. One of the things I’ll remember most about capstone is not just the final product that we handed in and presented three times at the end of the semester. Although, handing in something that you worked so hard on and getting positive feedback is a great feeling. But more than that, just spending time with the whole group is what sticks –  whether it was while we were working on the project or if we were grabbing beers after to celebrate handing in the next section.

Make sure that you don’t let yourself or your team members get too overwhelmed with these projects. They’re a lot of hard work, and they require a lot of hours be put into them. Don’t skimp on the hard work, I promise it will pay off. But take the time to realize when it’s been enough, when you and your team members need a break, and go grab a drink (or shotski) or two…you guys deserve it! It’ll be over before you know it, so just enjoy the ride.