Co-op to Full-Time Job at Amazon 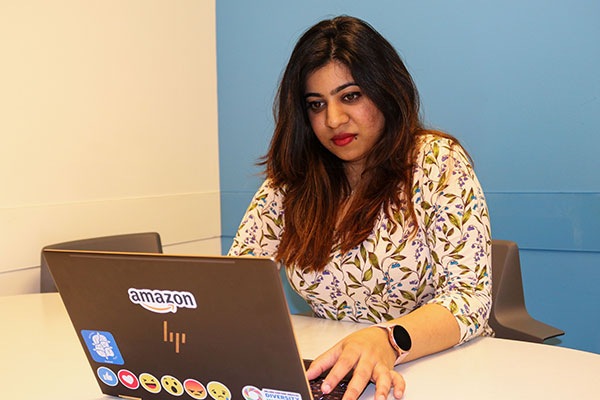 Vaishali Tripathi, a second-year MS in Information Systems student, completed a co-op at Amazon in December 2019 and was extended a full-time offer upon graduation. The co-op lasted six months and was an invaluable experience that allowed her to learn about developing a Self-Service User Interface-based operational excellence tool for process automation—from scratch!

Several agreements that Amazon sets up with vendors fail to bill due to various reasons. As such, the technical team needs to look into them to figure out the root cause and come up with the appropriate fixes for them.

“These lists of agreements are sent to the tech teams by the business teams and each list contains hundreds of agreements. All investigations for these agreements were performed by the tech team manually. Of course, there were several human errors because of the painful debugging. This process took a large amount of time and the activities were manually tracked using tickets.”

Tripathi was hired to fix the system to make the process more efficient and to absolve the tech team of any responsibilities for this process.

“I developed a tool that created a self-service platform for the tech and business teams to debug and fix these agreements by applying some pre-configured rules and automating the whole process,” says Tripathi. “All that the business user needs now is the list of agreements, and instead of creating a ticket and reaching out to the tech team, they just enter the agreement list on the website, that I developed, and it takes care of everything from that point, including auto generating the ticket, updating and maintaining it with appropriate communication, and closing it when resolved. The tech team doesn’t have to even take a look into it anymore!”

The project has proved to save a great deal of time and efforts for the Amazon team, as the tool was recently used during the Japan marketplace launch for roughly 1,000 agreements and close to 1,000 more for the rest of the marketplaces. The tool auto-fixed 98% of the agreements. Manually fixing an agreement takes 10 minutes, whereas the tool processes 100 agreements within 30 seconds. The tech team previously took three to four days to respond to updates, but now this new tool reduced the time to 30 seconds with 100% customer satisfaction.

Tripathi is slated to graduate in spring 2020 and is more excited than ever to work with Amazon as a full-time employee.