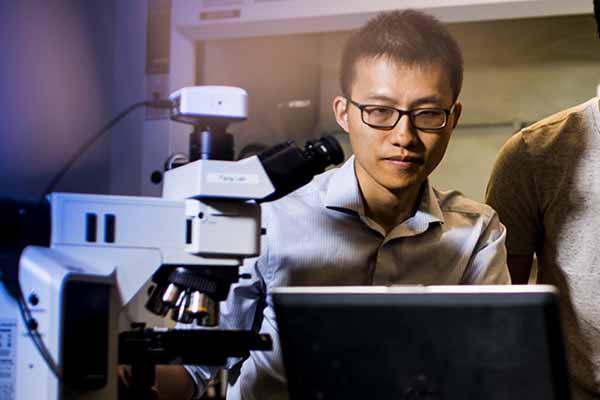 Assistant Professor Hui Fang, electrical and computer engineering, says that in order to truly understand the human brain, researchers need to be able to map much larger areas of the electrical activities in the brain than what’s currently possible. Given how complex the brain is, just examining a small region isn’t enough to truly grasp how it works, since distant areas frequently communicate with each other. To support future research on the brain, Fang is the principal investigator in collaboration with the University of Utah on a $479K grant from the U.S. BRAIN Initiative, sponsored by the National Eye Institute, one of the National Institutes of Health (NIH). Titled, “Massively Multiplexed Gold Microprobe Arrays for Whole-Mouse-Brain Recording,” this grant will support development of new mapping devices that will visualize large segments of the brain, allowing neuroscientists to gain a better understanding of how faraway sections interact.

Currently, complementary metal-oxide-semiconductor (CMOS) electronics are used to visualize the brain. While these electronics make it possible to reach the scale and time resolution needed to accurately measure brain activity, the resulting maps suffer from limited recording depth. In addition, the use of silicon wafers in the electronics makes them unfeasible for human experimentation. To get past these problems, Fang and his team will be combining CMOS electronics with metal microwires to form a solution where the two elements work synergistically with each other, providing brain maps that are considerably more detailed than what’s currently available today.

Because this technology is still in the early stages of development, the team will focus on mapping something smaller and less complex than a human’s brain: the brain of a mouse, which they hope to record in its entirety. If the project is successful, the methodology behind it could move toward experimentation on humans. “Basically, we think this is a pathway toward ultra-large-scale interface with the brain,” Fang says. “We hope we can achieve mapping on a scale of 105—or 100,000 probes—which is one or two orders higher than what’s currently possible with state-of-the-art technology.”

It’s easy to imagine the benefits that could come from a future version of this mapping tool if it is indeed able to successfully visualize large sections of the human brain. With this increased access to information, neuroscientists might begin to gain a better understanding of why and how things go wrong in the brain, and potentially, what can be done to prevent, manage, or even cure these ailments. In addition, because the solution Fang’s team developed works via flexible electronics rather than rigid silicon wafers, there’s also an additional opportunity.

“Through surgery, this technology can actually be implanted in the skull, potentially allowing people with paralysis to operate prosthetic limbs through neural activity,” Fang says. In other words, beyond possibly providing the map leading neuroscientists to understand some of the human brain’s most vexing puzzles, the technology his team is working on may go on to provide the solution to various unmet clinical needs.