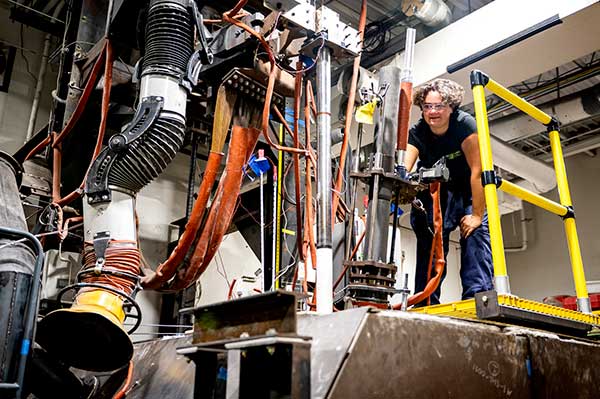 The College of Engineering has broken a new record and admitted more female students than male first-year students.

When Kara Gibson, 38, was in high school, she wanted to be a lawyer.

It was her physics teacher who convinced her to get a bachelor’s degree in engineering, first, and then go to a law school.

“I liked it more than I thought,” says Gibson, who finished her undergraduate studies as a mechanical engineer at Northeastern’s College of Engineering in 2007 and, instead of going to a law school, she completed the master’s program in energy systems in 2011.

In 2007, when Gibson was a senior at Northeastern, there were about eight female engineering students that made up about 9% of her class, she says.

This year, the College of Engineering has broken a record and admitted more female students—at 52%—than male first-year students. Overall, women currently constitute 37% of all undergraduate students in the college, says Rachelle Reisberg, director of Women in Engineering program and assistant dean of engineering enrollment and retention.

“We are very proud of our women in engineering—students and alums,” she says. “They thrive in our programs.”

Gibson has been working with Boston Metal for about three years. She manages a team of six process engineers and mechanical engineers who are designing the equipment and the process around a molten oxide electrolysis furnace, invented by MIT professors Donald Sadoway and Antoine Allanore.

Boston Metal has a diverse workforce, Gibson says, with more women working in different technical areas than there were at her other jobs earlier in her career. There were instances in the past when that had been challenging, she says.

“There is a little bit of a misconception of engineering,” she says. “Because, really, what it is, is problem-solving.”

Of course, an engineer needs to get through all of the courses in college to understand the fundamentals, Gibson says, but in the real world their jobs can include solving logistical problems or timing issues or coming up with creative solutions to get something done.

“It is not all math and science based,” she says.

“It is very rare that you would engineer something completely by yourself. You always need feedback from other people,” she says. “I like to solve problems together with people.”

Gibson’s younger colleague, Gisele Aoun (no relation to Northeastern President Joseph E. Aoun), an operations engineer, who also graduated from Northeastern with a bachelor’s degree in mechanical engineering in 2020, shares Gibson’s love for hands-on work and collaboration with colleagues as well as a passion for addressing climate change.

“I definitely wanted to have a job in green technology, so I minored in sustainable energy systems,” she says. “The concept of being able to address climate problems through engineering was very interesting to me.”

Boston Metal is Aoun’s first job out of college. Within the first eight months at the company, she became an operations team lead.

“We are there to facilitate the driving of the experiments,” Aoun says.

During testing, cells need monitoring and constant maintenance, and cannot be left unattended, she says.

“It’s cool to have been involved in building that,” Aoun says. “Seeing progress over time is also rewarding.

Aoun leads a team of five people. Her job is to make sure that the daily tasks get done properly, the people on the team are trained and they have resources they need to do whatever they are doing.

She also communicates with other teams about how the experiments are going so they all have the same information and important details.

“We do a lot of communication just by talking. So we have to be pretty open and clear,” she says.

During her time at Northeastern, Aoun was able to try a few different fields within engineering through co-ops. She worked on medical devices at Boston Scientific; on a grid scale liquid metal battery storage at Ambri, where she enjoyed doing a lot of welding and fabrication; and at electric scooters company, Superpedestrian.

“I feel like you do notice that there are fewer women [in engineering] but I think I was pretty lucky to have people at all of my jobs that were like mentors, who took the time to help me and talk to me,” she says.

Boston Metal offered her a perfect intersection of all her interests and educational training, she says.

“It almost feels like [it is] a lucky coincidence that I ended up working at Boston Metal, because it did feel like a really good fit for me, in terms of the content of the work that we are doing, the workplace and the environment,” Aoun says.

“It allowed me to really see more of a realistic picture of what it [engineering] is, and I did feel prepared,” she says. “I’m not sure that I would have stayed with engineering if I didn’t have that perspective.”

Through co-ops, she was able to develop relationships in the industry that she maintains to this day.

“I can call on those people if I need connections or need to talk to whoever,” Gibson says.

Regardless of gender, she says, engineering is a good career choice that can be applied to different types of technologies and will provide a good salary for the work that one puts in.

“There are more opportunities than I realized when I was younger for working in different industries, different types of jobs, where you can branch out from,” Gibson says. “After you get your bachelor’s, there’s many more options than just mechanical engineering. You can take it in a lot of different places.”