A team of capstone students from COE and the College of Arts, Media and Design provided a conceptual plan to provide a bridge over Forsyth Street that would lead to four green rooftops.

An interdisciplinary team of Northeastern University students and faculty have combined their knowledge of engineering and architecture to create a plan to revitalize Forsyth Street, a city road that runs through the middle of campus.

The concept was created for a senior capstone project, a large-​​scale effort comprising a total of 20 students from the College of Engineering and the College of Arts, Media and Design. And while there’s no formal plan to implement the proposal, the team is hoping its concept will spur conversation and further collaborations.

Led by a faculty member from each of the two colleges, the proposal aims to transform Forsyth Street from a prime thoroughfare for cars and buses into a lush green space for pedestrians and bicyclists. Its signature component—a curved pedestrian bridge, 150 feet long and 30 feet high—would provide direct access to four green rooftop spaces while acting as an iconic gateway into the heart of campus.

“Northeastern’s co-​​op program and international presence set it apart from all other universities,” said Ellis Hecht, E’16/MS’16, who helped to design the concept for the pedestrian bridge. “But we need something that sets our campus apart from the rest.”

The capstone project was spearheaded by Julieta Moradei, E’16, a fifth-​​year civil engineering major with a strong interest in incorporating the principles of architecture into her co-​​ops and classwork. After lobbying to work on a capstone project in collaboration with the architecture department, she connected with two faculty members who believed in her interdisciplinary vision—Janos Stone, lecturer in the Department of Art + Design, and Daniel Dulaski, associate teaching professor of civil and environmental engineering. Then she worked with them to assemble a talented team of engineers, architects, and graphic designers, students in COE and CAMD who convened to create an exceptionally well-​​researched, thoughtful, and creative proposal to redesign the street dividing campus in two.

“We feel this design fills so many needs of the university and its urban campus,” Dulaski said. “It takes such an innovative and unique approach, one that’s wonderful for bicyclists and pedestrians as well as event staff and marketing.” Noted Stone: “The students worked on this project with a very contemporary way of thinking, taking a blue sky approach. Their entire concept is very cool.” 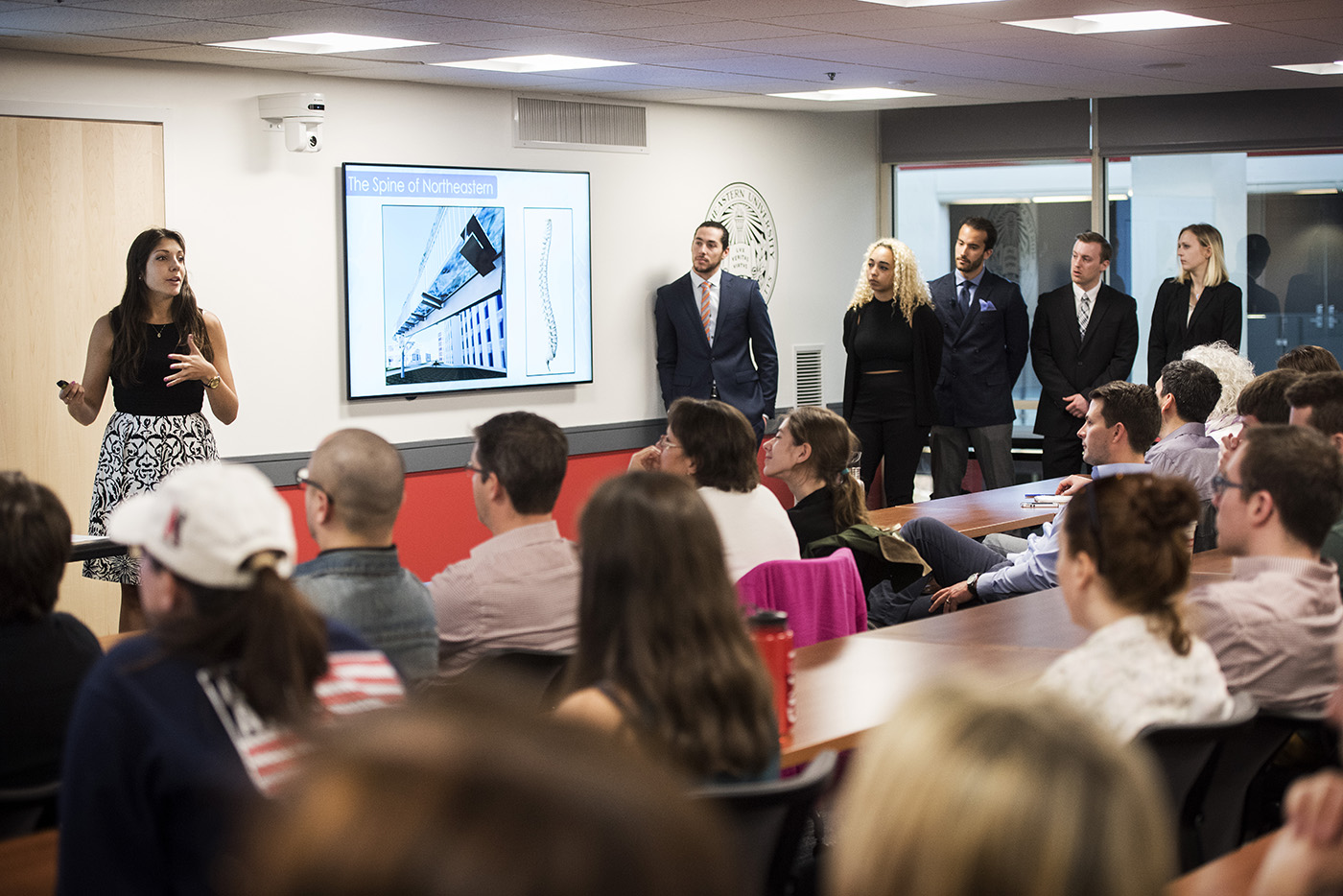 Under the proposed plan, Forsyth, Greenleaf, and Leon streets would be closed to vehicular traffic, transforming them into pedestrian-​​only zones a la New York’s Times Square and Boston’s Downtown Crossing. The transportation and industrial engineering students re-​​routed shuttle busses that access Forsyth Street and created drop-​​off zones for cars on Opera Place, Parker Street, and Huntington Avenue, in front of Krentzman Quad. They also improved the university’s bicycle network, proposing a cycle track on S. Forsyth Street as well as mixed-​​use paths to connect campus with Parker Street and the Southwest Corridor Park.

“We tried to make as many connections as possible to any future bike networks that Boston might want to implement,” explained Sarah Ebaugh, E’16, a fifth-​​year civil engineering major. She studied the Netherlands’ state-​​of-​​the-​​art cycling infrastructure during a Dialogue of Civilizations program there last summer and then served as the capstone project’s bike and transportation specialist. As she put it, “I was really trying to push the importance of cyclists and pedestrians over motor vehicles.”

The structural engineers designed the bridge, which is composed of two columns with cantilever arms extending from both ends. Moradei calls it the “spine of Northeastern,” the meaning of which is both literal and figurative: “Not only does it look like a spine, but it functions as one too,” she explained. “It is located at the core of campus and is the iconic structure you will see as you first walk into Northeastern.”

The architects and graphic designers collaborated with the engineers to create the green rooftop spaces, perhaps the most novel of the proposal’s components. Each space—whether on the top of Dockser Hall, the Forsyth Building, the Snell Engineering Center, or the Dana Research Center—is designed for a particular activity and features modular elements that are at once reconfigurable and highly personalized. 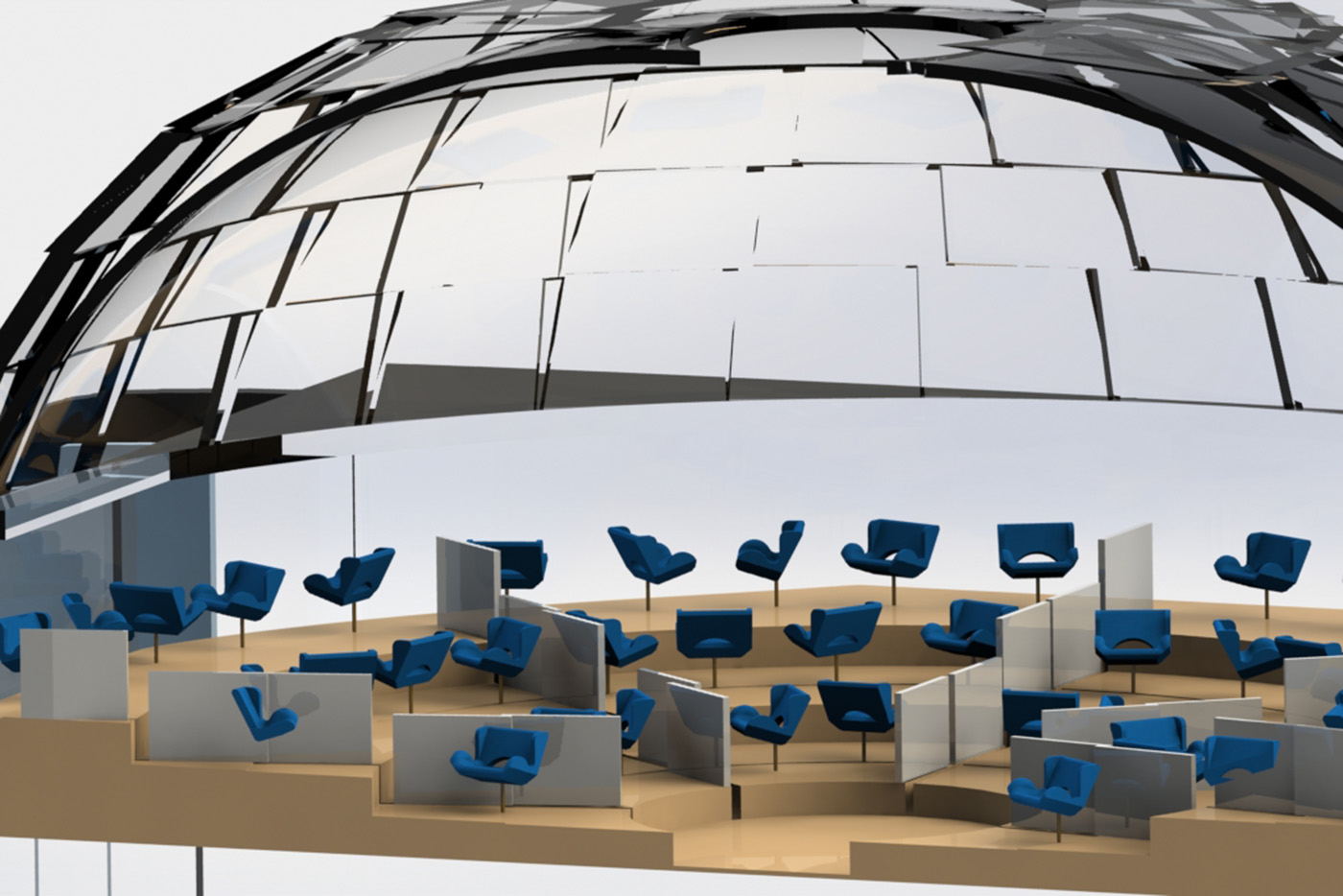 The “Skylarium,” featuring a glass dome through which viewers could marvel at Boston’s skyline.

Dubbed the “Fit Roof,” Dana’s space is designed for group workouts and includes a modular tool that can be used for a variety of different exercises. Forsyth’s roof is dedicated to live performances a la afterHours and features retractable seating. Snell’s roof, called the “Skylarium,” is something of a lounge area with rotating chairs that can transform into tables and recline backward. And Docker’s roof, known as ReNU Relax, is a meditative space with customizable music, seating, and skylights.

“There is a need for more space to study and relax and hang out on campus,” said Diego Rivas, E’16, who designed the concept for the “Skylarium” using a computer-​​aided-​​design program. “I don’t know any other place in Boston that is expanding upward rather than outward.”

The capstone team estimates that the project would cost $6.8 million to implement and take up to 24 months to complete. Said Ebaugh: “It could really provide campus with so much more space as well as a very compelling and innovative design.”