Getting Involved with Research Local and Abroad 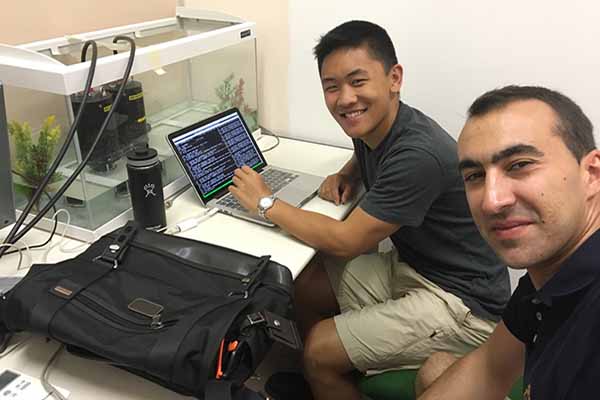 Picture: Andrew (left) running experiments in the lab at the University of Rome “La Sapienza,” assisted by Petrika Gjanci, a member of the SUNSET development team.

Andrew Tu is a rising second year student currently pursuing a combined BS in computer engineering and computer science at Northeastern University. Andrew joined the NU MONET project as an NSF funded REU student in early October 2015. He recently returned from Italy where he worked with graduate students from the University of Rome “La Sapienza.” Outside of research, Andrew is engaged in activities throughout Boston ranging from Toastmasters to competitive ballroom dancing. 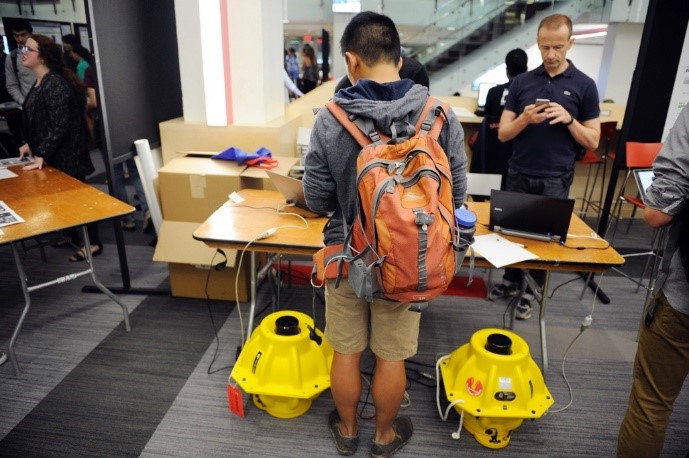 In mid-September of my freshman year, just two weeks after I arrived on campus to begin my college career, I found myself squeezing into a jam packed Curry Student Center for the 3rd COE Undergraduate Research Lab Fair. Now, as a freshman not even three months out of high school, the prospect of talking to professors and post-docs about joining a full-fledged research project was quite a daunting task. Nevertheless, I slowly made my rounds, looking at the different labs and projects, occasionally stopping to talk to a friendly face and sign up for a newsletter. I finally found my way to a curious display of what appeared to be two microwave sized yellow hardhat balls wired up to a power supply and laptops. After a brief discussion with the project’s PI, Professor Stefano Basagni and the lead engineer, Yashar Aval, I learned that what I had previously taken to be hardhat balls were in fact highly sophisticated underwater acoustic modems who were to be implemented in an underwater network called the Northeastern University Marine Observatory Network, or “NU MONET”  for short.

Some three weeks later, I received an email about a follow-up meeting for students interested in joining the project. Still intrigued (and truthfully, noting the mention of pizza), I RSVP’d for the meeting eager to learn a bit more. After that meeting, I scheduled another, and another, and another, before finally deciding to join the project as an NSF-funded REU student. In the nearly ten months since I stumbled across the curious hardhat balls at the undergraduate research fair, I have had the incredible opportunity to learn about everything from powerful technical skills like programming and computer networks to soft skills like paper writing and public speaking. 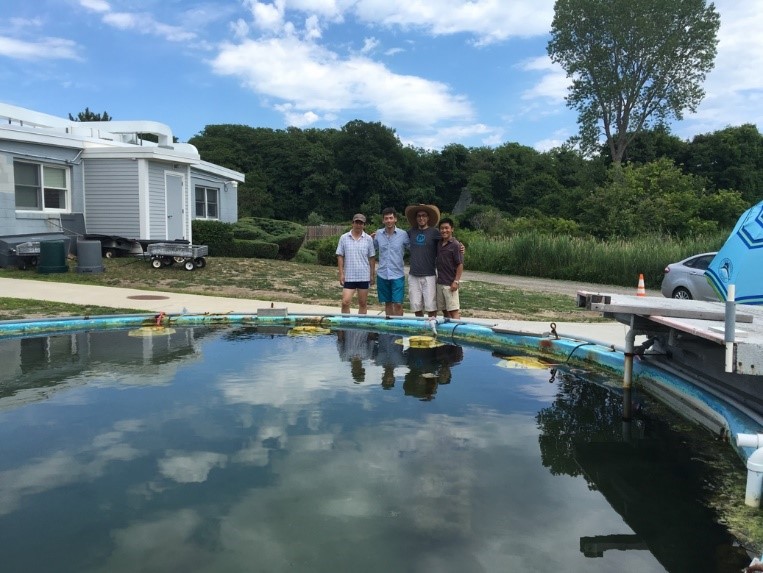 Our Research: In any domain, whether it be open channels within a team or a strong Wi-Fi signal to stream Netflix, communication is crucial for systems to be successful. With nearly 70% of Earth’s surface covered in water, reliable underwater communication is instrumental in connecting us to everything from remote sensors to autonomous underwater vehicles (AUVs). Unfortunately, current methods of wireless communication (e.g., radio or light) are ill suited for long distance underwater communication. As such, we are working to deploy a permanent underwater acoustic networking at the Northeastern University Marine Science Center (MSC) in Nahant, MA where we will be able to test underwater networking protocols that will be more efficient in transmitting information.

During my first few months with the NU MONET project, I worked predominantly with writing MATLAB code to control our acoustic modems. As time progressed, our programs grew in complexity until we were able to run full length experiments (lasting multiple hours) testing the efficiency of different networking protocols over the acoustic channel. As spring break approached, I took a break from the MATLAB development to write a paper for the Embark: Northeastern Undergraduate Engineering Review. Working closely with my research mentor Yashar, and our project PI Professor Basagni, I began to work with LaTex, a “document preparation system” used heavily by the academic community for technical paper writing. Unlike Microsoft Word, LaTex requires you to “compile” (like computer code) your work to generate beautifully laid out documents for publication. After making strong headway into the paper, I also began to work on a more open-ended aspect of our project: designing a smart buoy and a power control system.

In early June, our team received notice that we had been accepted to the IEEE/MTS OCEANS 2016 Conference hosted in Monterey, California. The conference, sponsored by the IEEE Oceanic Engineering Society and the Marine Technology Society (MTS), is specifically dedicated to presenting and sharing ideas in marine research. This conference also marks a personal milestone: publishing my first peer-reviewed paper.

Then, after working with the NU MONET project for just over 8 months, Professor Basagni approached me with a unique opportunity: to travel to Italy with him and work with a team of researchers at the University of Rome “La Sapienza” with all expenses supported by a travel grant from GENI. The team at Sapienza, led by our host professor Chiara Petrioli, had developed a software framework named SUNSET (Sapienza University Networking framework for underwater Simulation, Emulation and real-life Testing) that would not only allow us to more easily control our network, but could in the future, enable us to join the SUNRISE federation of underwater wireless networks through a web portal known as the “SUNRISE GATE.” Needless to say, I was ecstatic for the opportunity to travel abroad to continue with our research project.

Mid-June found me touching down on the hot tarmac of the Leonardo da Vinci–Fiumicino Airport in Rome, Italy. I met Professor Basagni at the train station where he walked me to my hotel where I dropped off my bags before meeting him in the hotel lobby. We then walked to the lab I would be working (grabbing a bite to eat along the way) and I was introduced to the team I would spending the next two weeks with.

During my first two days at Sapienza, I was introduced to SUNSET’s range of capabilities through a combination of emulated demonstrations and video footage of real world experiments. One of the most profound examples of SUNSET in action was video footage of an AUV controlled in real time with SUNSET over an acoustic link. The team further explained how they set up their underwater deployments for experiments, drawing out a diagram of the relationships between the acoustic modems, custom designed battery packs, and buoys. Most importantly, they explained how SUNSET greatly simplified real world experimentation and an overview of its use.

Following the demonstrations, I began to experiment with a publicly available version of SUNSET in order to learn about how the software worked. Once I had worked out the basics, I began to use a newer, more robust version of SUNSET. After successfully running several emulations, I progressed to a “real world testing” by connecting my laptop to two acoustic modems in a small tank and ran several more mini “experiments.” Whenever I got stuck, one of the team members would come over to my area to explain where I was going wrong.

In addition to my work with SUNSET, I had the opportunity to attend three PhD defenses by candidates at Sapienza. While the defenses were not concerned with networking (they primarily focused on the development of tools for graphic designers), the glimpse into the completed work of a graduate student was nonetheless a valuable experience.

Of course, my time in Italy wasn’t always spent in the lab. After work (usually around 7pm), Professor Basagni and I would drop our bags off at the hotel and head out into Rome for dinner. From “0 km” ristorantes to traditional trattorias, to pizzerias and aperitivos, Professor Basagni (a native Italian) knew the best places to eat to provide a full image of Italian cuisine. With full stomachs, we would venture to a range of sights–from the famous Colosseum and Roman Forums to a non-descript keyhole with a breathtaking view of St. Peter’s Basilica. Along the way, we chatted animatedly about everything from the history of Rome to the nuances of Italian culture to the development of the NU MONET. During our time in Italy, I got to know my professor outside the context of classes and grades, but as an individual with a fascinating history.

Following my work in Rome, I spent some time exploring northern Italy. From Florence to the Cinque Terre, to Milan and Venice, the journey was simply bliss. My favorite part of the circuit was my stay in Levanto, a cozy town just outside of the Cinque Terre where I took a train an hour north to go scuba diving in Portofino (did I mention becoming scuba certified is another perk of working on an underwater research project)?

Returning to Boston was a very bittersweet experience. On one hand, it was the end of a remarkable trip but on the other, I was eager to return to the lab to continue our work. Getting involved in undergraduate research has been one of the best decisions of my undergraduate career. Research has introduced me to an brilliant community of mentors and leaders, has taught me invaluable skills, both technical and soft, has afforded me an opportunity travel and work abroad, and most importantly has grown into something that I love to do.