Her Engineering Degree Was the Launchpad for a Wide-Ranging Career 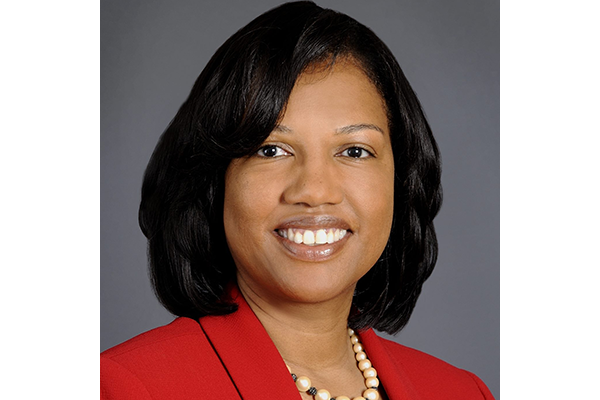 There is an undeniable symmetry to Michele Lezama’s career, but it’s the breadth of that career that’s most impressive.

Lezama, E’88, arrived at Northeastern on a scholarship for Black engineering students and now is President and CEO of the organization that made her education possible. During the 35 years between, Lezama worked as an IBM engineer, a media executive for CBS and HBO, and the top executive for three nonprofits.

“There was certainly nothing planned or designed about my path,” says Lezama, who has completed the circle as president of the National Action Council for Minorities in Engineering (NACME). “It was the product of having the skills I needed to take advantage of the opportunities that came my way.”

She credits Northeastern with providing the launchpad for her long and varied career.

“Engineering is a background for so many fields,” she says. “You can apply the analytical skills to any task. You learn how to think through a process. My engineering degree taught me to become a problem solver.”

As a girl growing up in The Bronx, Lezama excelled at math. So naturally, she wanted to become a math teacher—it was the only option she knew.

“My mother looked up the salaries for math teachers and said, ‘That’s never going to get you out of The Bronx.’ Then she saw the salary for engineers and said ‘This is your ticket.’”

But there was still one problem: The price of that ticket was out of reach.

That’s when NACME came to the rescue with a scholarship that, combined with student loans, made it possible for Lezama to attend Northeastern. While earning a degree in industrial engineering, she landed a co-op at IBM and the company offered her a full-time job after graduation.

She was on her way.

“Northeastern gave me the skills and experience I needed to gain access to an industry I would never have had access to growing up in the Bronx,” she says.

After five years at IBM, she earned two master’s degrees at Columbia University—one in engineering and the other in finance. With these additional skills in hand, she decided to shift gears and begin a media career, first with CBS and then with HBO.

At CBS, she handled on-air signaling for national programming, including the logistically complex March Madness basketball tournament and was part of the financial team that handled David Letterman’s transition from NBC to CBS.

The exposure she received from the Letterman deal led to a lucrative job offer from HBO, where she was in charge of the company’s satellite connections during the birth of television’s Golden Age.

“It was the era when Sex in the City and Chris Rock were the rage,” recalls Lezama. “I grew up in an under-resourced community in New York City, and now I was working for a company that was high profile in that neighborhood. I was like a kid with her hand in the jelly bean jar.”

Lezama thought she would be at HBO forever. But after four years, she received a call from the National Society of Black Engineers (NSBE), an organization she had volunteered for as a student at Northeastern. The organization was looking for a new executive director who had both engineering and financial skills.

“I thought I’d take two years and help NSBE become more financially stable, then go back to my media career,” she says.

That was twenty years ago—and she has never gone back.

Instead, Lezama served as the executive director of three nonprofits and found what she refers to as her life’s work— building social, financial, and educational pathways for minority engineers.

Looking back, she says her success all started at Northeastern. While earning her engineering degree, she served as president of the campus chapter of NSBE and ran the national organization’s annual conference in Boston, which featured presidential candidate Jesse Jackson as the keynote speaker.

“Who would have thought that being active in a student organization would lead to the executive director 30 years later?” she says, noting this led directly to her current position as president and CEO of NACME.

For Lezama, there is a lesson for others in her journey:

“Be actively engaged in every experience along the way,” she says. “For me, each experience was a tool—a foundation and skill developer—for a position I would hold later in life.”

New Partnership with the National Action Council for Minorities in Engineering