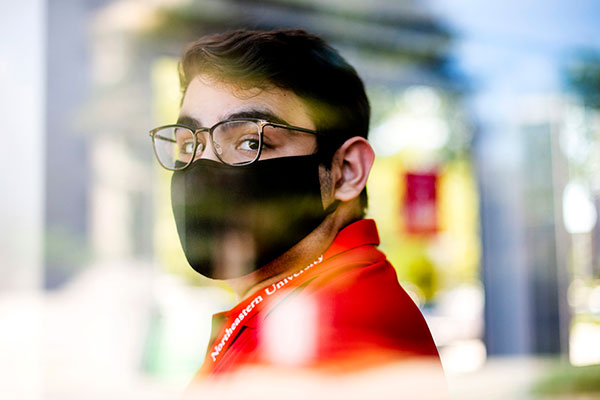 Mechanical engineering student Max Seidel, E’24, and his friend launched Atlanta Face Shields during the pandemic to create and donate face shields to front-line workers, which he plans to continue to do now that he is back at school.

Mechanical engineering student Max Seidel returned to the Boston campus with plans to produce face shields for people on the front lines of the COVID-19 outbreak using a 3D printer in his single room in International Village. Photo by Ruby Wallau/Northeastern University

Max Seidel had made the most of his time away from Northeastern. One week after the pandemic forced him to leave the Boston campus in March, Seidel joined with a friend to launch Atlanta Face Shields from his hometown. The group has donated 4,250 shields to hospitals, police departments, schools, and other organizations mainly in Georgia, though some were shipped as far away as Mexico City and Pittsburgh.

Seidel has returned to campus over the weekend with plans to continue the charitable work. He will be using a 3D printer to produce face shields from his single room in International Village.

“I don’t know if I’ll have enough space in my room to hold 20 to 25 rolls of filament,” says Seidel, a sophomore who is studying mechanical engineering at Northeastern, where he has earned a College of Engineering Healy Scholarship. “But I’ll figure it out.”

One week after the pandemic forced him to leave campus in March, mechanical engineering student Max Seidel joined with a friend to produce and donate 4,250 shields to hospitals, police departments, schools, and other organizations. Photos by Ruby Wallau/Northeastern University

The Atlanta charity was inspired by a call to action by Tikkun Olam Makers, an Israeli organization of communities in 24 countries that helps the poor, the elderly, and people with disabilities. Seidel is creating a chapter of the organization at Northeastern, which will enable fellow students to join him in creating and distributing face shields along with participating in other Tikkun Olam Maker events.

He admits to being concerned by reports that 115 Northeastern freshmen were planning to attend parties on campus. The university sent emails to the freshmen warning them that group parties present “a danger to your health and the health of our community.”
He says Northeastern’s plan to test students every three days has helped allay his concerns.

“As the university has released information on how they were tackling it, I have been OK with going back to campus,” says Seidel, who plans to attend in-person classes as often as possible. “The way that they’re handling it, I think it’s been done extremely well. There are ways you can meet people and hang out while staying healthy and safe.”

Seidel was by no means isolated during the past five months. He was routinely traveling to gather supplies or help oversee production, and along the way he tested negative for the coronavirus.

The charity work helped him deal with the pressures caused naturally by the pandemic.

“It kept me from stressing about things I can’t control,” he says. “And it ended up helping me control some of those things by the nature of what I was doing, because I was hoping that our work would help to contain the spread.”

The pandemic has affirmed his appreciation for school, he adds.

“I’m excited to get back,” Seidel says. “I like having classes and homework because it challenges me and keeps me busy.”