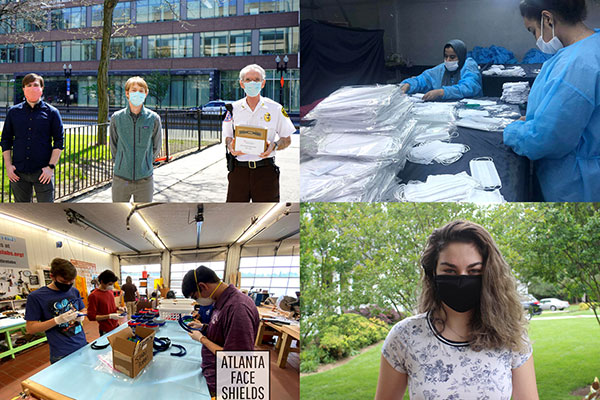 ‘It’s comparable to the space race’

Max Seidel grew up taking creative approaches to problem-solving. When he was asked to sweep the floor as a little boy, he would try to fulfill his chore by positioning a small broom on the back of a toy remote-controlled car.

One decade later, Seidel—now a rising sophomore at Northeastern—has responded to COVID-19 by creating a network of 60 volunteers across five states who have produced more than 2,700 hospital-quality masks—with more on the way.

“It’s comparable to the [1960s] space race: When you work together on something, you can move incredibly quickly,” says Seidel, who launched Atlanta Face Shields from his hometown a week after he returned in March. “I feel like we’re enabling the actual heroes—the doctors, the nurses, the firefighters. They want to do their jobs safely so that we can flatten the curve.”

Seidel is just one of many members of the Northeastern community who have responded to the demands for personal protective equipment, face masks, and other safety items by turning their unanticipated time away from campus into opportunities to mitigate the pandemic. Here are a few of their stories.

At 14, he had built a 3D printer from scratch—and he had five of them by the time he moved to Boston last year to study mechanical engineering at Northeastern, where he has earned a College of Engineering Healy Scholarship.

After Northeastern moved to online learning in response to the pandemic, Seidel returned home to Georgia and launched a GoFundMe that has contributed to the $27,000 that has been raised from individuals as well as private and public organizations. His Atlanta Face Shields project was inspired by a call to action by Tikkun Olam Makers, an Israeli organization of communities in 24 countries that helps the poor, the elderly, and people with disabilities. Seidel is donating the reusable Prusa face shields, which are produced at a cost of $3 each; large groups are being asked to make donations in kind, in order to keep the project going.

Seidel says he has been in communication with a wide array of consumers, including company chief executives and the police chief of Atlanta. The issue of who should have the first crack at receiving them created an “ethical dilemma,” he says.

“We decided the best approach is first come, first served,” says Seidel, who is partnering with his best friend from high school, Nathan Eads, who attends the University of Alabama. “It isn’t up to us to decide who is facing the greater risk.”

Tyson was studying in Australia when she was forced by the global response to the pandemic to return in March to her family home in Chapel Hill, North Carolina. She had been feeling “hopeless and angry and useless” when she heard about an artist an hour away who was heading the PPEople Brigade—a nonprofit group that was creating and donating disposable face shields from the clear plastic covers that are used for 8.5-by-11-inch presentation binders.

“I could see ways to make the mask cheaper and quicker, so I joined in with this group of four women,” says Tyson, who plans to graduate next year in business administration. “I’ve been able to take over the sourcing and supply chain and most of the tech stuff in order to streamline the process—I’ve had experience with that from my co-ops.”

The face shields don’t meet stringent medical standards, but they are suitable for other types of workers.

“We’ve had feedback that they’re more comfortable than 3D-printed shields, just because these are very flexible and a lot softer on the forehead,” Tyson says.

“I spend a lot of time dealing with Native American reservations, and the big issue has been trust,” Tyson says. “They’ve been scammed by so many people selling them stuff that never arrives, and a lot of them are very wary to even accept free face shields because they don’t think that it’s a real thing.”

The experience has left her with mixed feelings.

“When I came back to the States, I was so hopeless because I felt like this is something that no one could do anything about, and everyone was scared and alone,” she says. “This has really helped me to see that everyone is willing to do their part if you just let them know what they need to do.

“But I do think it is so sad that there are nurses and doctors that can’t get proper PPE, and that there are for-profit companies that won’t pay for it. It’s incredibly difficult, and we’re going to need something big to change in healthcare for these people to be protected.”

In March, when Northeastern moved to online learning and its campus was closed, Kana responded proactively. Kana, the manager of the Maker Space in the College of Arts, Media and Design, and his co-op, Jonathan Bell, each took home 3D printers that would enable them to continue their work. Their ambitions quickly shifted: They began collaborating on a plan to print and distribute face shields and “ear savers,” which are flat neck straps that provide relief to people who wear surgical masks for extended periods of time.

Kelly Zona, Northeastern’s director of media studios, helped them gain the “essential worker” status that would enable them to return to the Boston campus. Funding for their project was arranged through the provost’s office.

On May 5, Kana, Bell, and Zona began operating 15 3D printers at the Maker Space at Ryder Hall and the Ruggles Architecture Studio. Within three weeks, their small team had already produced 2,200 items of personal protective equipment.

One thousand of the ear savers have gone to Boston Emergency Medical Services. There is talk that Kana’s team may contribute equipment to Northeastern when its campuses reopen in the fall.

“It’s been great to see Jonathan become, essentially, our production manager by fully embracing the workflow efficiencies of what we call a 3D print farm,” Kana says. “It’s really important for facilities like ours to provide relief to those who are on the first line and risking themselves for the benefit of others.”

Shortly after the government imposed physical distancing measures and suspended all flights out of the country in early March, Amine El Aymani’s family closed their four textile factories in Morocco.

Aymani and his family were worried—not just for their own financial future but also for the 1,300 workers they employed. So as grassroot efforts to slow the spread of the virus began taking place all over the world, Aymani and his brother began brainstorming ways they could help.

Maybe they could reopen a factory and make masks for the public, Aymani thought.

Days later, they reopened one factory, and started making masks by hand with 10 employees. The demand grew exponentially, Aymani says, and he began adapting the equipment to produce masks at a faster rate.

More than a month later, all four factories have been repurposed, and 1,000 workers are producing masks for the public as well as personal protective equipment for healthcare workers.

“Masks were scientifically proven to protect us and the people around us,” says Aymani, a Northeastern graduate with bachelor’s and master’s degrees in mechanical engineering. “If I could just make a small dent into solving this issue, I knew I had to do that. We thought of this as our opportunity to help the community, employ our workers, and recover financially.”