To Build a Better Drone, Look to the Bat 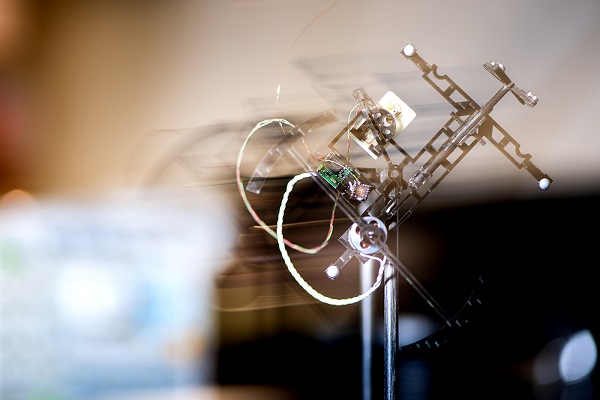 Their world is flipped upside down.

Bats  eat, sleep, poop—even make babies—while hanging upside down. It’s how they spend most of their lives.

To get to that hanging point, bats pull some of the most incredible aerial stunts of the animal world. After a swift turn midair, a bat can perch for hours. That natural ability to just hang inverted makes them experts at saving energy, and when it is time to fly away, they only need to let go and flap their wings.

Now, Alireza Ramezani, an assistant professor of electrical and computer engineering at Northeastern, has come up with a way to design drones that mimic these complex aerobatics and save energy.

“If you want to stand on something, you have to consume energy,” Ramezani says. “That makes perching the way bats do interesting because you can think of aerial drones that can passively hang from structures in a dormant kind of state, without consuming energy, and instead harvest energy to continue their operations.”

As a bat approaches a landing point, it pulls one of its wings in, catapulting its weight upwards with enough precision to flip belly up. It’s a quick maneuver similar to a flip turn in freestyle swimming.

After months of studying footage of bat locomotion and even stepping inside a cage full of bats (for science), Ramezani designed a robotic mechanism that can reorient an airborne robot a la bat to prepare for landing. Once the robot is facing a structure, it shoots out a projectile that attaches itself to the structure to hang from it.

The system, aptly named Harpoon, could give aerial drones an advantage over the hovering drones most people know, which are known for consuming too much energy to sustain long flights. These drones, Ramezani says, often work poorly in conditions involving strong winds and tight spaces—something bats figured out ages ago.

“Bats use very natural aerodynamics to manage these acrobatics, so we don’t always appreciate how agile and elegant they are,” says Ramezani, who focuses his research on bio-inspired robotics. “A quadcopter can be very robotic when it approaches new structures to hang on to them, basically surpassing all of these natural dynamics, and that is a very energy-hungry process.” Alireza Ramezani, assistant professor in electrical and computer engineering, works in the Interdisciplinary Science and Engineering Complex. Ramezani is working on a project to create unmanned aerial robots that can hang from structures. Photo by Ruby Wallau/Northeastern University

At first, it may seem bizarre that an animal (or a robot, or anything, really) would just hang upside down all the time. But as the only mammals that can truly fly (flying squirrels merely glide), bats have a pretty good reason for that. Bats developed bodies too heavy for liftoff. So, unlike birds and insects that fly by simply jumping up and fighting gravity, bats drop from above using gravity. Once they start flapping their wings, they can be better fliers than birds.

Using that drop assist to become airborne, bats might have the most energy-efficient takeoff in the animal kingdom. That’s what Ramezani is after.

“Currently, we are tracking the motion mechanism of flying objects with cameras in the lab and using our algorithms to help them reorient towards a landing spot,” Ramezani says. “But bats don’t have that, so eventually we will replace our cameras with sensors onboard the robot that will turn the system into a fully self-sustained platform.”

Copying that grand landing maneuver is another piece in the puzzle of making a robot (or, robat) that mimics the sophisticated biomechanics of bats. Ramezani started working on this puzzle as a postdoctoral researcher at the University of Illinois at Urbana-Champaign and later at the California Institute of Technology. In 2017, he and his collaborators unveiled a Bat Bot.

He is now working on an improved drone with advanced flying characteristics that are more similar to a bat’s shape and movements. The new system will be packed with soft, but durable materials, such as silicon and carbon fiber. That kind of robot can take a hit, but would pose little harm if it accidentally strikes a person, which isn’t always the case with standard drones using rotating blades, Ramezani says.

“Think about quadcopters, which you cannot really operate in the proximity of humans,” he says. “That’s because their rotary beam systems are not really safe.”

The idea is to use biomimicry to make a drone that handles itself adroitly in the air, Ramezani says. That involves making sharp turns, flying through tight and cluttered spaces, and managing to perch upside down the way bats do.

“We want this system to be able to negotiate its environment,” he says.

Ramezani, who initially started making bat robots with the idea of flying them in construction zones to prevent incidents like fires, says checking all of those marks will bring aerial drones a step (or, flap) closer to flying safely in residential areas.