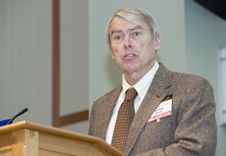 The United States spends more money on potato chips than on research and development for new energy technology, according to Northeastern University engineering professor Michael Silevitch.

Speaking at the 11th annual Research and Industrial Collaboration Conference, held last week at Northeastern, Silevitch declared “we have to rethink our priorities or else we’ll become a nation of users rather than innovators of technology. Other countries are surpassing us in terms of patents and the number of students in science, technology, engineering and math.”

Silevitch, the Robert D. Black Professor of Electrical and Computer Engineering, is director of the Bernard M. Gordon Center for Subsurface Sensing and Imaging Systems (Gordon-CenSSIS) and codirector of the Center for Awareness & Localization of Explosives-Related Threats (ALERT), which co-hosted the conference.

The daylong event brought together more than 300 people from academia, industry and government interested in collaborating on innovative sensing, imaging and detection technologies with the goal of bringing research to reality — a goal that dovetails with Northeastern’s focus on use-inspired research that solves global challenges in health, security and sustainability.

The conference featured keynote addresses from program managers at the National Science Foundation, the Defense Advanced Research Projects Agency and the Department of Homeland Security (DHS), and research presentations by professors from colleges and universities around the country—including Northeastern, the University of Puerto Rico at Mayaguez, the University of Houston and the University of Hawaii.

After the presentations, experts in the homeland security, civil infrastructure and biomedical fields discussed potential applications of the research and barriers to succeeding in the marketplace.

“To successfully bring research to reality, strong partnerships between universities, industries and government are required,” said Douglas Bauer, the program executive for basic research within the explosives division of the science and technology directorate at DHS. “Our enterprise is one of mutual problem definition, problem solution and infrastructure development.”

Bauer noted the importance of meeting future homeland security challenges by utilizing the unique capabilities of federally designated Centers of Excellence such as Gordon-CenSSIS and ALERT.

He also pointed to a graduate-level collaboration in image processing between Department of Energy national labs and industry giants, such as American Science and Engineering, Inc. The company develops advanced X-ray inspection systems to combat terrorism and trade fraud.

“In addition to the benefit of the research output,” said Bauer, “the student’s connection with a national laboratory has secured employment—a goal eluding too many Americans in our troubled economy.”

Following a presentation on detection of potential suicide bombers using wave radar, Richard Johnson, a lieutenant colonel in the Massachusetts Army National Guard, summed up the importance of bringing research to the field.

“The real customer is the end user, especially when you’re talking about safety,” said Johnson, who recently returned from Iraq. “To detect bombs at this kind of distance—we have nothing like that. If we can eliminate the threat, or even buy time to make decisions, this is worthwhile research.”

Co-led by Northeastern and the University of Rhode Island, ALERT is a Department of Homeland Security Center of Excellence that is conducting transformational research and technology development for effective detection, mitigation and response to the explosives related threats facing the nation.

Gordon-CenSSIS is a multi-university National Science Foundation Engineering Research Center.  Its mission is to revolutionize detection of biomedical and environmental-civil objects or conditions that are underground, underwater or embedded within cells or inside the human body.

For more information, please contact Jason Kornwitz at 617-373-5729 or at j.kornwitz@neu.edu. View the article here.