Building the Next Generation of Autonomous Robots 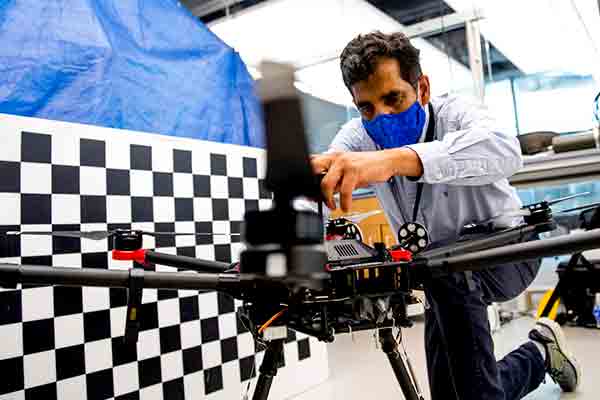 ECE Professor Hanumant Singh is working to build the next generation of autonomous robots to explore remote environments like the bottom of the ocean.

He’s building the next generation of autonomous robots

Main photo: Hanumant Singh, Professor of Electrical and Computer Engineering, works on a drone in the ISEC building on Sept. 28, 2020. Photo by Matthew Modoono/Northeastern University

If you walk into the Interdisciplinary Science and Engineering Complex on Northeastern’s Boston campus, and climb the helical staircase to the collaborative areas on the fifth floor, you’ll find flying drones, kayaks converted into ocean robots, and several other robotic gadgets. They belong to Hanumant Singh, a professor of electrical and computer engineering who’s dead set on building the next generation of autonomous robots.

A field roboticist, Singh designs, tests, and builds machines that other researchers can deploy during scientific expeditions to remote environments such as the bottom of the ocean.

Most drones lack the ability to snatch and handle different types of samples in the field. Building the next generation of autonomous robots, Singh says, will take integrating components like robotic arms.

One of Singh’s most recent scientific cruises took him to the Arctic. In Greenland’s Sermilik Fjord, one of his robots rendered sharp 3D maps of melting icebergs—something that is currently difficult to do with autonomous robots.

“We have robots that go out and make a map—whether it’s mapping an iceberg, looking at fish under the ocean, or counting penguins,” Singh says, referring to how his aerial drones helped study dwindling penguin populations in Elephant Island, Antarctica. “But we aren’t actually collecting stuff.”

To bring his drones to the next level, Singh wants to give them a hand. Or, rather, a whole arm.

“We’re basically saying that we are going to take an arm, and we’re going to put it on an underwater vehicle or a land vehicle, and then we can do interesting things with it,” he says.

But because of the COVID-19 pandemic, Singh’s experiments came to a halt.

In March, after the lab went into lockdown, Singh’s team followed an official process to follow the proper COVID-19 distancing guidelines while still giving them access to their equipment. It was important to physically check on the robots’ batteries and perform other essential tasks, he says.

Now that the university’s reopening plan is in full swing, Singh has been excited to return to the lab. Of course, he says, there’s still a pandemic going on, and research is different these days. The lab, for example, now operates with only two people working together at a time.

That can get difficult, he says, because working with robots isn’t meant to be a solo job. It takes real teamwork.

“When you’re working on a robot, whether you’re tightening a screw or plugging in a cable, it’s hard to maintain social distance,” he says. “You’re pulling on a battery, and the batteries are big, and there’s two of you doing it, and then there’s a third person there to make sure they can help too.”

In other words, Singh says, one person can’t simply walk into the lab and fix a robot.

Still, Singh is happy to be back, and to see that he and other people in the Boston campus are resuming their research, work, and studies, while maintaining the proper physical distance to avoid contracting COVID-19.

“The pandemic is not an ideal situation—we all know that,” Singh says. “But are we doing the best we can do? I think we are.”

Singh says the aspects of the lab that he has missed the most include the ability to collaborate and bounce ideas off with other engineers. That, he says, has been one of the most energizing parts of being part of the Northeastern community.

On a normal day, the Interdisciplinary Science and Engineering Complex is vibrant with scientists and engineers who study not only robots, but also cybersecurity, nanomaterials, and other fields of research. When the structure opened in 2017, U.S. Sen. Elizabeth Warren called it “a true temple of science,” and Northeastern president Joseph E. Aoun referred to it as “a piece of art” for research.

“I’ve never worked in cybersecurity, but because those guys are right there, you start chatting with them, and you realize that we all have these common interests,” Singh says. “That’s the part that’s been missing.”

With few reservations, Singh talks about how he would love to get back to normal life. But he also knows that even though some researchers have returned to campus, the practice of research as he knew it—much like everything else on this pandemic-ridden planet—has changed forever.

Singh also says he is well aware of the risk of coming into contact with SARS-CoV-2, the coronavirus that causes COVID-19. But he understands the role everyone at Northeastern is playing to help him and others take on their grand missions.

And because he also directs the master’s program in robotics, Singh knows that the ability to spend time in the lab isn’t only about the research, but about the experience that budding researchers such as graduate students are able to absorb in those labs.

“We have a really strong robotics program,” he says. “We want our students to get the experiential part, which is so critical for robotics, what separates us from everybody else.”