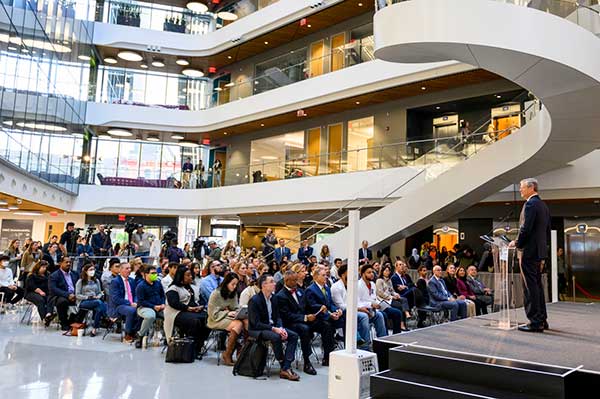 In celebration of Massachusetts STEM Week, Governor Charlie Baker spoke at the kickoff event held at Northeastern on Monday, about the importance of increasing awareness of STEM education and employment opportunities.

‘STEM is going to be part of everything.’ Northeastern hosts Gov. Charlie Baker to kick off STEM Week 2022

Katherine Aristizabal Norena took her first engineering class as a senior at Lowell High School—an experience that helped her discover her passion for the hard sciences.

“When it came time to think about college, I was drawn to Northeastern because of its exceptional programs in science and engineering, and the opportunity to get [real-world] experience through co-op,” Norena, a second-year engineering student at Northeastern, said. “I’m also proud to say that I’m the first person in my family to have attended college.”

Northeastern’s Boston campus hosted Baker, Lt. Gov. Karyn Polito and members of their cabinet on Monday to celebrate the start of the administration’s fifth annual STEM Week, a five-day campaign aimed at increasing awareness of STEM education and employment opportunities.

This year, the statewide campaign focuses on the need to support historically underrepresented youth, particularly Black and brown students, “in STEM fields to pursue STEM careers.” Richard Harris, associate dean of diversity, equity and inclusion and diversity programs at Northeastern’s College of Engineering, helped to sharpen that focus in his remarks following Norena’s address.

“Katherine in many ways is a reflection of the opportunities that Northeastern has been able to afford students from across a broad spectrum of diverse backgrounds,” Harris said. “And so hopefully that gives you some insight into what this unique experience of STEM really represents.”

Harris highlighted the ongoing partnership between Northeastern and the National Action Council for Minorities in Engineering—the only such collaboration of its kind in Massachusetts, he said—to provide undergraduate scholarships to BIPOC students.

Harris introduced Baker, describing the governor as a “true champion of STEM education” who’s helped generate “pathways for underrepresented minorities and women … who see themselves in STEM careers.”

Baker began his remarks by quoting Robert Lewis Jr., president and CEO of the Boys & Girls Clubs of Boston. “He said, ‘talent is everywhere, opportunity is not,’” Baker said.

“And the thrust of his point was that we all have to be more intentional about ensuring that everyone who has an inkling or a talent for things like STEM has a chance to discover it and pursue it,” Baker said.

Baker said the impetus for the creation of STEM Week was twofold: to create “a party” that celebrates STEM, and secondly, “to use that party as a device to encourage all kinds of organizations to do work, to find partnerships in anticipation of STEM week, and then to build on those partnerships after.”

In a nod to the university’s worldwide leadership in scientific research, Baker thanked Northeastern for hosting STEM Week’s kickoff.

“Your role and your participation and your enthusiasm for the very aspirational goals and objectives that STEM Week is all about is very special to us, to the lieutenant governor, Secretary [of Education James] Peyser, and to our team,” Baker said.

He urged everyone—from students in attendance from area high schools, to the virtual audience watching the event—to think about the future of innovation, work and the economy through the lens of what a STEM-focused education can accomplish.

“STEM is going to be part of everything,” Baker said. “It is incumbent on all of us to get and understand that everybody needs an opportunity and a chance to participate in where this economy, this country, this world is going.”

“Yes, you can make it,” he told students from the represented high schools. “You can come to all of these universities around us here in the commonwealth … but also I see that something is missing, and we haven’t focused on that yet. And it’s the fact that people—because of AI, because of STEM, because of the life sciences—are becoming obsolete.”

Aoun told the group that, in order to compete in a rapidly changing global economy, “reskilling, upskilling and reinventing” is essential. An influx of talent, by itself, will not nourish the economy of the future.

He said that universities “have not done a good job helping people reinvent themselves.”

“And it’s time for us to do it,” Aoun said. “Lifelong learning is going to be essential.”

Aoun, in turn, thanked Baker for his leadership in the area of education.

“You mentioned that this week is a celebration, and we are also celebrating you—your administration, because you have decided to focus on an issue that we, as educators, feel is very important,” Aoun said.

Concluding the event, identical twins and TikTok sensations Malik and Miles George, who starred in a recent Microsoft Windows 11 commercial, spoke about the need to diversify the sciences—how scientific research, thought to be objective, exhibit biases that can hurt marginalized populations.

“Access is not only crucial, but it’s necessary for the progression of STEM as we try to tackle some of the larger science problems that are impacting us and will continue to impact us,” Miles said. “It is vital that we have people of diverse backgrounds, ideas, mentalities, and identities—not just for their own benefit and the communities’ benefit, but for the world at-large.”

Yassine Souabny, 17, a senior at Boston Latin School, was one of those students. One of Northeastern’s “young scholars,” Souabny spent the summer studying data science and the opioid crisis.

“I was never really into health care and didn’t have any exposure to data science,” Souabny said. “Personally, I’m more of an engineering and STEM guy. I like my technology and using my hands; but I was able to see how it could relate to the things I was passionate about.”

Souabny said he’s in the process of applying to colleges, including Northeastern.