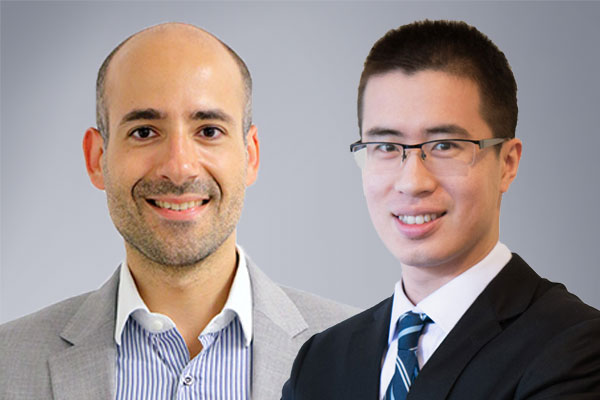 ECE Professor and SMART Center Director Matteo Rinaldi (PI) has received a $550K grant from the National Science Foundation titled, “Zero-Power Wireless Flame Detector for Ubiquitous Fire Monitoring.” The project, which centers on developing a smart wireless sensor that continuously monitors its environment, only turning on when a relevant event is detected, can be used to improve fire detection, among many other applications. ECE Research Assistant Professor Zhenyun Qian is a co-investigator on the project, which is being conducted in collaboration with United Technologies Corporation (UTC).

“We built a sensor that is always monitoring the environment but is not consuming power,” Rinaldi said. “Only when it detects a specific infrared signal that comes from the target, then it turns on and can communicate the presence of the event of interest.”

Rinaldi and his team will be developing zero-power digitizing infrared sensors, which “can selectively harvest the energy” from specific infrared signatures that warm objects emit and use it to activate a wireless transmitter to communicate the presence and the location of the target event. This allows the sensors to operate without using any electrical power when in stand-by.

A particularly interesting application for the sensor is with enabling ubiquitous fire monitoring, Rinaldi said.

“Residential buildings have smoke detectors to detect the smoke from potential hazards,” he explained. “They are easy to make, cheap, and easy to install. They work, but there are also issues.”

On a larger scale, such as with commercial buildings and construction sites, existing smoke and flame detectors encounter even more issues.

“The existing flame detectors are expensive and consume power continuously,” Rinaldi said. “Imagine deploying hundreds of these flame sensors to perform fire monitoring in a large, complex environment. When we deal with so many sensors deployed in large and complex environments, frequent battery replacement is not only impractical but it can even be dangerous and certainly it is not sustainable from a cost perspective.”

“The beauty of our technology is that we developed this unique approach for wireless sensors to be ‘off-but-alert.’ They can continuously monitor, but are only ‘on’ when there is a flame. You can go from having to replace the battery in a few weeks to 10 yrs.”

Rinaldi recalled the Notre Dame cathedral fire that happened in April 2019. The building had been under construction when a fire broke out and a large portion of the structure was destroyed.

The same technology could be applied to numerous areas though, Rinaldi added. For example, the sensors could also potentially detect energy emitted from the human body. This could be applied in office settings to perform people counting, allowing companies to optimize the use of their air conditioning systems.

Furthermore, Rinaldi said the technology could be applied to environmental sensing and used in smart farming. The sensors could potentially detect when crops are “stressed” and need water.

“It’s extremely important to maximize the yield of a crop, while also minimizing use of natural resources, such as water and fertilizer,” he said. “This is a known problem.”

The NSF grant is a fantastic opportunity to demonstrate a minimum viable product prototype of the zero-power wireless flame sensor technology, Rinaldi concluded.

“This invention triggered a re-thinking about how we perform sensing and wireless communication. We can now make passive wireless devices that are smart enough to turn on only when there is a need. This approach completely eliminates the standby power consumption of the sensor extending the battery lifetime from days to 10 years which ultimately eliminates the need for battery replacement and enables the deployment of persistent and ubiquitous wireless monitoring systems in any environment and at a low-cost.”

The broader impact/commercial potential of this Partnerships for Innovation – Research Partnerships (PFI-RP) project is to advance the development of a disruptive fire monitoring sensor technology that could save thousands of lives and prevent billions of assets loss annually. Currently large-scale wireless fire sensor networks suffer from prohibitive cost associated with ownership, installation and maintenance. Commercially available sensors rely on active electronics to detect and discriminate signal of interest. Therefore, they consume power continuously to monitor the environment even when there is no relevant data to be detected, which results in a short battery lifetime limited to very few months. The proposed wireless flame detectors can be deployed virtually anywhere by dramatically reducing the cost associated with sensor hardware, installation, and maintenance. The completely passive sensing mechanism and wireless connectivity of the proposed technology offer fire protection in environmental conditions considered harsh for conventional electronics (e.g., extreme temperature and limited access to power sources). The project will advance the technology to address the constricted spaces of an aircraft (i.e., the engine or the cargo compartments) where the propagation of fire is significantly hampered, hence restricting the use of the conventional fire detectors.

The proposed project aims to develop a novel micromechanical flame detector consuming near-zero power in standby until awakened by the specific infrared signature emitted by a flame. The fundamental technical challenge lies in the continuous power consumption of state-of-the-art sensor technologies. The proposed device advances recently developed zero-power digitizing infrared sensors that can selectively harvest the energy from the specific infrared signature emitted from a warm object to operate without using any electrical power. The rigorous fire detector standards require a high level of system robustness and stability against environmental variabilities such as temperature extremes, vibration, and extraneous transients. The proposed project will demonstrate a prototype meeting the national flame detector standards.

This award reflects NSF’s statutory mission and has been deemed worthy of support through evaluation using the Foundation’s intellectual merit and broader impacts review criteria.