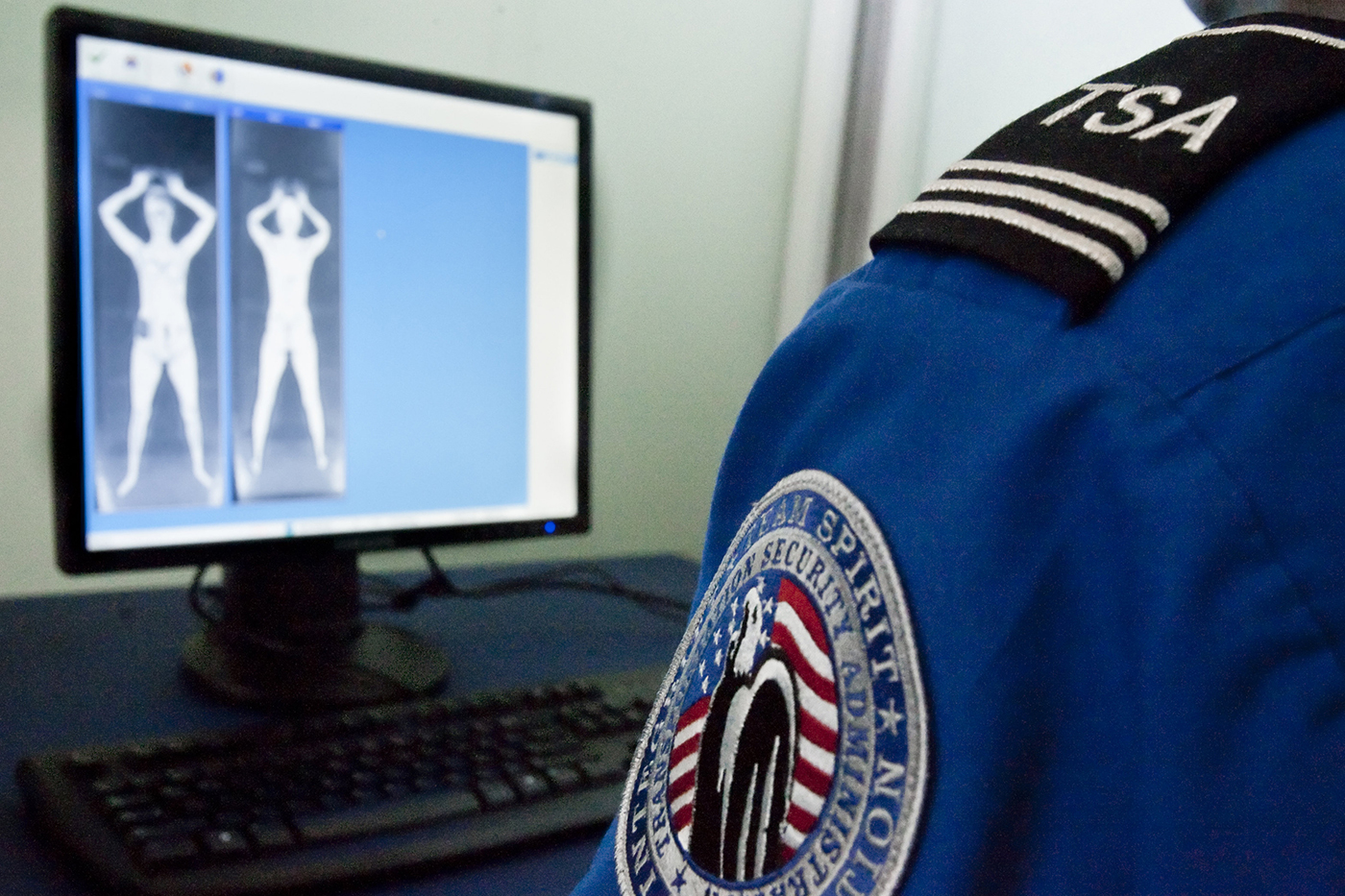 Current airport scanners require travelers to stand in an awkward, hands-over-the-head position for several seconds while they are scanned for suspicious items under their clothes.

For many people, the worst part about flying is the security line at the airport. Waits can be hours long, as each person takes a turn standing perfectly still in the scanner.

But what if people didn’t have to stop at all? What if they could just keep walking? Researchers at Northeastern are working to build a system that could keep travelers moving and cut down on those long wait times at the airport.

“The eventual goal is to have hallways with sensors on the left and right sides,” says Carey Rappaport, College of Engineering Distinguished Professor at Northeastern. “You walk between them and as you walk by, the sensors will create an image of your body.”

Currently, when you step into an airport scanner, place your feet on the yellow footprints, and raise your hands over your head, columns of sensors rotate around you to get an image of your body from every angle. Rappaport and his fellow researchers recently received a patent for a way to create a 360-degree image without needing a head-on view of every side of a person.

The sensors in an airport scanner send out millimeter waves, tiny radio signals that penetrate clothing and bounce off skin or other objects. They pick up the reflected signals and compile them into an image (which is fuzzed up by algorithms to an acceptable degree of propriety).

But the sensors can only pick up signals that are reflected back at them. Imagine pointing a flashlight at a mirror: If you’re standing directly in front of the mirror, the light bounces back at you. But if the mirror is at an angle, the flashlight’s reflection will be scattered off into the darkness.

Similarly, if you try to create an image of the front or back of a person with sensors on the side of a hallway, the millimeter waves will hit at an angle and bounce away.

“Unless you have a receiver in the right direction, you won’t be able to image that part of a person,” says Jose Martinez-Lorenzo, an associate professor of engineering.

Rappaport and Martinez-Lorenzo, along with Borja Gonzales-Valdez who is now a postdoctoral researcher at the University of Vigo in Spain, came up with a way to put linked sensors on the opposite wall to pick up these scattered reflections and form a complete picture.

“The waves bounce off your stomach or your back and end up on the other side of the hallway,” Rappaport says. “So put detectors on both sides. Put a transmitter on the right, and observe right and left. Put a transmitter on the left, and observe left and right. That’s it. That’s the way you could get the front of a person, and you don’t have to have him or her turning to face the wall or pirouetting around.”

Each transmitter would be linked to multiple receivers on each wall, to successfully catch the reflected waves no matter where they bounce. This could help to cut down on false positives as well.

If millimeter waves ricochet off of two parts of your body that are in close proximity, the unexpected change in direction can read as a hidden object, even when nothing is there.

“Between your arm and your chest, between your legs, even between your chin and your neck—anytime there’s some sort of an indentation—it’s likely that you’ll have a bright spot where you’re not expecting it,” Rappaport says.

This is why you have to stand in that awkward, hands-over-the-head position in the current scanners; the pose is an attempt to minimize the number of valleys that could cause confusing reflections. But by transmitting signals from both sides of the hallway and receiving them wherever they end up, the system would have enough information to correctly identify these spaces. You could stand or walk normally.

There are still a few challenges to work through, including how to lower the costs of such a system. But Rappaport says the technology that could speed up waits at airports across the country isn’t far off.

“The wish that TSA, the Department of Homeland Security, and everybody wants is this hallway system,” Rappaport says. “You want someone to just walk normally or stand on a moving walkway as they approach a gate or an airport and be scanned.”