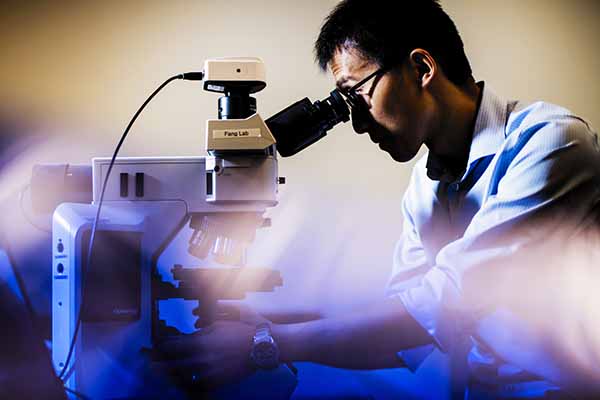 The practical use for stretchable silicon might not seem immediately obvious to the average person, but Hui Fang, assistant professor of electrical and computer engineering, says there are a number of useful applications for electronics with elasticity.

“Traditional electronics in your phone and your computer, they’re basically rigid, right? Silicon electronics are usually wafer-based, and in applications like phones and computers, rigid works perfectly well—the silicon doesn’t need to be stretchable,” Fang says. “But there are a lot of other applications where stretchable silicon is needed: for example, if you wanted to have electronic skin for robotics or prosthetics, or comfortably-fitting wearable devices.”

Of course, anyone who learned about the elements also knows that silicon—being an inorganic semiconductor —is highly inflexible, let alone stretchable. The central conceit of Fang’s project is that the “stretchable” silicon he’s developing isn’t really stretchable at all. Rather, it’s embodied as a “nanomesh,” which is exactly what it sounds like: a film with nanoscopic pores, each with silicon between them. Because nanoscale is inconceivably small and undetectable by the human eye, to the average person, the silicon material that comes as the end result of Fang’s research will make it appear and feel like the semiconductor itself is stretching.

“Another benefit of stretchable silicon is its softness, which makes it appropriate for applications in biomedical science,” he says. In this capacity, the material could be used for anything from health trackers to wearable therapeutic devices.

The transformative aspect of this project arises from the broad utility of the resulting design and engineering knowledge for nanomesh electronic materials, having profound impacts to not only fundamental materials science but also a broad range of applications in human-electronic interfaces and smart robots.

As with nearly all grants awarded by the National Science Foundation, there is an educational component to Fang’s research as well. Beyond expanding the curriculum at Northeastern to include more education on soft electronic materials, the scope of the project also includes summer research and exhibits for children grades K-12 at the Oklahoma WONDERtorium children’s museum and appeal to undergraduate students for early research.