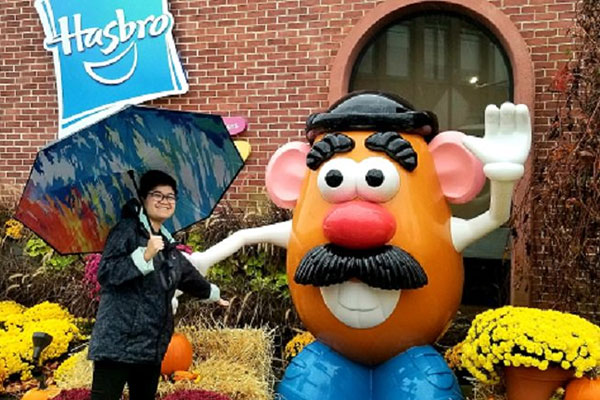 “For my co-op, I got the job through the Northeastern system and I think this helped because Northeastern has a history of co-ops at Hasbro. I probably wouldn’t have found the co-op if it wasn’t on NUcareers (which is NUworks now, I think). It was also nice because there were multiple co-ops from Northeastern so we would commute together each day.

A lot of things I was told in my co-op class became more apparent once I started my co-op. The interpersonal skills I learned were just as important, maybe even more so than the electrical work I was doing. Something I also enjoyed at Hasbro is that the work I was doing was rarely busy work and often directly impacted the company. I would work on prototypes that were going to be presented to upper management and I was helping develop technology that would be used in the future,” said Wong.

Drawn to an electrical engineering role at Hasbro in part due to the opportunity to use her skills to contribute to toy and animatronic design, Wong now raves about the company culture having concluded her co-op in June of this year.

“I really liked working at Hasbro and I think they’re a really great company. The office environment was very friendly and young.” she said. “I had the chance to work with a lot of different departments like the chem lab, quality assurance, costing and marketing. You get the chance to explore a lot of different branches of the company when you’re there.”

Wong had the chance to attend meetings with partner companies like Marvel, Star Wars and My Little Pony, on top of her more regular responsibilities working with demo boxes, prototypes and programming chips. Her circuits class, taken with Professor Iman Salama, was integral in translating her coursework to her co-op for responsibilities such as programming, according to Wong.

During her time at Hasbro, Wong also got to work on an ‘epic project,’ a large-scale project that pairs co-ops together to design a product from start to finish. Though her proposed product is still confidential as it has yet to hit shelves, Wong says she plans to keep up with the development and release of this, and any other product she worked on, even after her co-op has concluded.

“There’s a lot of confidential stuff and it can be so far in advance that you might not see anything come out during your co-op, but you’re definitely doing work that’s relevant to the company in working on prototypes that are going to be real products,” she said.

Beyond the professional development related to her responsibilities or work, Wong points to the robust co-op program and youthful culture as a driver behind personal growth during her co-op.

“Getting to meet and make connections with all the other co-ops was a really rewarding experience, and I think that in future co-ops, I would definitely keep an eye out for companies that have multiple co-ops,” Wong said. “I met a lot of people from other schools too which was really cool.”

Most importantly though, her experience working at Hasbro in developing products and getting to collaborate across departments allowed Wong to see a much wider range of possible career paths and redefine her own views of success.

“It opened my mind to how many different avenues to success there are, because there’s so many people doing so many different things in the company,” Wong said. “Also, everyone there had fun because you work at a toy company. People really like their job, so I was like ‘Wow, you don’t have to suffer every day at your job’ because these people really enjoy what they do.”