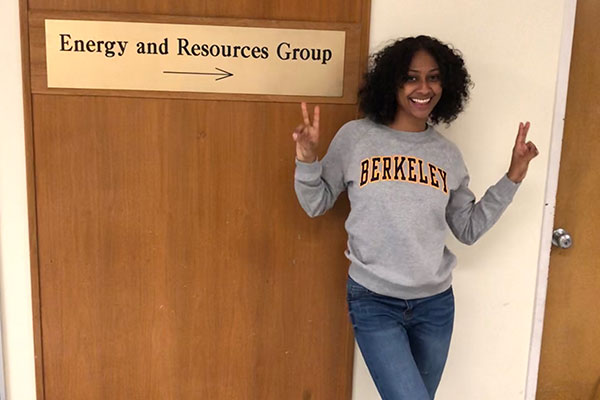 Main Photo: Nia Jones, E’20, industrial engineering, part of the first cohort of S-POWER Scholars, achieved the Huntington 100 and will be going to graduate school at the University of California- Berkeley and conducting research as part of the Energy Resources Group.

Whoever said, “You can’t do it all,” never met recent Industrial Engineering graduate Nia Jones. Originally from Washington, D.C., Jones transferred from Clark Atlanta University where she was in a dual degree engineering program.

Jones joined the College of Engineering through the Stu­dent Path­ways Opening World Energy Resources (S-POWER) scholars program. Aiming to increase work­force diver­sity in STEM fields and the energy sector, S-POWER allowed Jones to create her own personal pathway in the energy field.

“Northeastern completely changed my perspective, not only on school but on life,” she said. “It made me realize the potential things I could do. It tested my limits and gave me experiences I never would have had otherwise.”

Jones was also recently named to the prestigious Huntington 100, an honor recognizing outstanding undergraduate and graduate students for their classroom and community achievements.

“Getting the email reminded me that my journey is one that should be celebrated,” Jones said. “I took advantage of every opportunity and immersed myself in the entire Northeastern experience.

“It was a reminder telling you that you did it right, you did it your own way, you made your own path and that should be respected and honored,” she added. “It’s such a prestigious group of people and it’s an honor to be involved in something bigger than myself.” 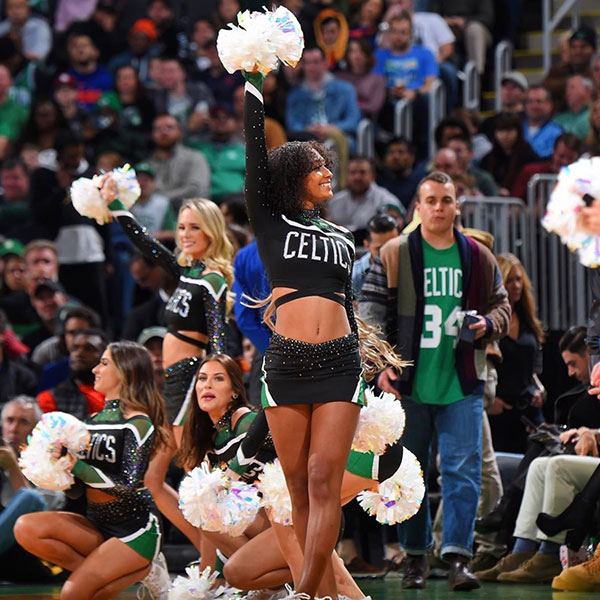 Nia Jones, E’20, industrial engineering, achieved her dream as a pro-cheerleader for the Boston Celtics while balancing co-op at Eversource and her engineering studies.

In her time at Northeastern, Jones also accomplished a personal dream: be a professional cheerleader. Undeterred after not making the final cut for the Boston Celtics cheerleading squad in 2018, Jones went back in 2019 and found success.

This led to working two or three home games a week with late nights, balanced with working a co-op at Eversource. But the drive to be an athlete, an engineer, and a student powered Jones through that hectic schedule.

“It was a great experience, and I really appreciate that I was able to have that,” she said.

Lift as you climb

In the summer of 2018, Jones participated in the Dialogue of Civilizations, which are faculty-led programs focused “on critical issues facing students and their peers at both the local and global levels.”

Through India’s Barefoot College, Jones worked with Solar Mamas. The program trains women from underprivileged areas how to be solar engineers, Jones explained.

“They’re paid to come to the program and then take solar energy and bring it back to their villages,” she said. “Experiencing something that profound led me into what I want to do post-grad.”

Jones hopes to continue working toward that greater good as she attends the University of California, Berkeley for graduate school. She was accepted to the Energy and Resources Group (ERG), where research topic will be, “STEM Education in Prisons: The Implementation of Renewable Energy Programs in Malawi Prisons to Reduce the Chances of Recidivism and Increase the Chances of Successful Rehabilitation.”

She added that her family has been a true support system to her and has been key in helping her get to this point in her life. It’s important to remember to lift others up as you climb, Jones explained.

Her younger cousin, Deniro, has been incarcerated since 2017. That also helped inspire Jones to develop her graduate study plan.

“My goal is to provide renewable energy resources in prison,” Jones said. “The great thing about that vision is that Berkeley supports it. They have a partnership with San Quentin prison. They don’t have renewable energy [as a program] now, but they will.”

Jones never expected the things that happened along her own journey to transpire the way that they did. But, she wouldn’t change it.

“Follow your instincts,” Jones said. “Go after your dreams, no matter how crazy or unattainable they sound to others. Trust that you are exactly where you need to be.”