Invaluable Research Experience on Co-op at the University of Oxford 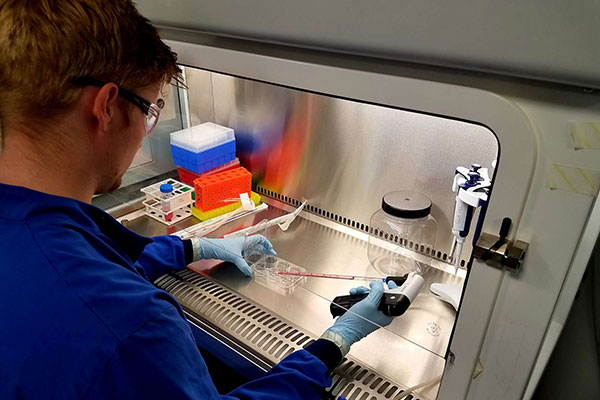 Michael Fitzgerald, E’20, or Fitz as he is known, is from San Diego, Calif. and is pursuing a BS in Bioengineering with a concentration in cell and tissue engineering and a minor in ethics. He is currently on co-op at the University of Oxford in England conducting neurodegenerative disease research.

For his career ambitions, Fitz hopes to get a PhD and post-doctorate position studying neuronal development and function, particularly as it relates to neurodegenerative disorders, and someday also become a teaching faculty at a university. Alongside this, he is also currently learning Russian and he plans to get flight certified so he’ll be more qualified to apply to be a NASA Biological Science Payload Specialist Astronaut, specifically he’s interested in studying neural development in microgravity. He says after all of this, he’d like to move back to his hometown and become a high school biology teacher to challenge high schoolers to look at the world around them and question why things are the way they are and how they can use their brains as tools to make it better.

The roadblock at my stem cell research co-op in Oxford and how my C. elegans research at Northeastern and water dynamics helped me overcome it.

My supervisor at Oxford is one of the most intelligent men that I’ve ever met, so I was quite surprised when at the onset of my project he leaned back in his chair, shrugged his shoulders, and said “ya, stem cell work is more of a black art than a science”. Four months later I now understand what exactly he meant by that. 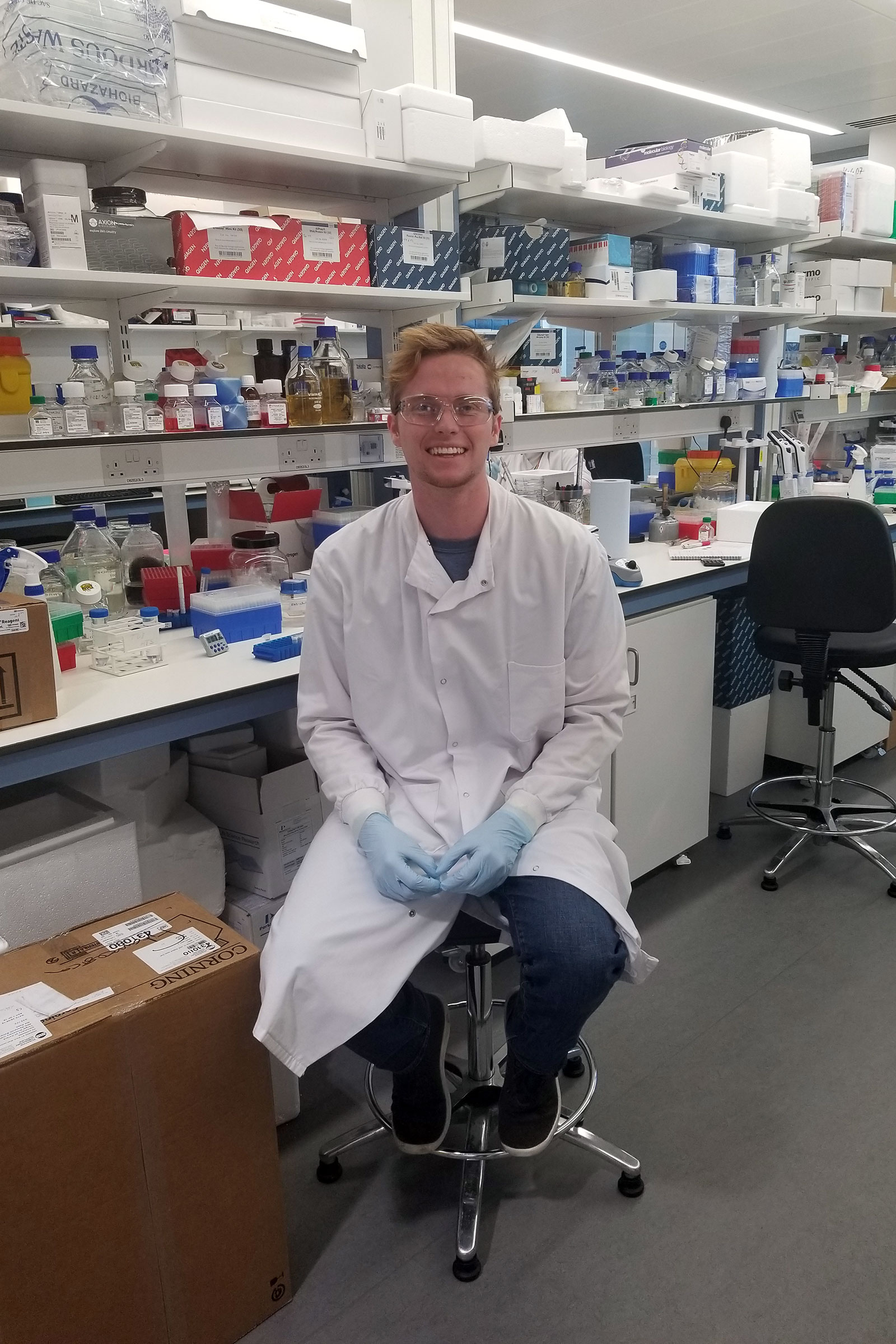 My work with induced pluripotent stem cells (iPSCs) has been a rollercoaster. I began my coop at the University of Oxford with the task of using CRISPR/Cas9 technologies to knock down the expression of OTX2, a gene we believe controls the switch from pluripotency to neuronal identity in stem cells. However, along the way, I’ve encountered a host of problems that often made my goals seem out of reach.

The first problem I had was passaging. When my cells would outgrow their wells, I followed a standard protocol to move them to a new well for continued growth. However, my iPSCs wouldn’t seem to detach from their old well. When I vigorously rinsed them with media so they come off of the well, the colonies would break up and undergo apoptosis. After testing many different techniques, I found that using a cell scraper could efficiently detach the cells while keeping them in colonies for passaging. But just when I thought I had mastered the art of iPSC culture I discovered a new problem, spontaneous differentiation. As it turns out, iPSCs often lose their pluripotency and begin to differentiate into other cell types. For the most part, small amounts of differentiation is okay, but it can become problematic when a whole colony begins to differentiate.

This presented obvious unwanted difficulties for my experiment, so I had to find a solution to the problem. In my C. elegans lab at Northeastern, we use small thin metal picks with flat tips to pick up and move worms. The skill is quite difficult to master, but⁠ after two years of worm research—I’d say I’m pretty good with a pick. I decided to use this skill to lift and remove areas of differentiating iPSCs from the well. However, there were a couple of problems with this. Namely, I didn’t have a pick. Even if I did, I would need a microscope to use the pick effectively. We have microscopes, but the problem is that I can only take the cover off of my cells in a tissue culture hood due to contamination risks, and we don’t have any microscopes in a tissue culture hood. So, I had to get creative…

I decided to MacGyver a makeshift “water microscope” that I could use in the hood. My plan worked like this. I put my cells (covered) under one of our normal microscopes to identify large areas of differentiation. I needed a way to mark where the differentiating cells were and noticed that my red ballpoint pen wiped off easily when applied to the bottom of the dish, but my black sharpie did not.  I would then use the red pen to approximately mark on the bottom of my dish where the differentiating cells were, check my accuracy under the microscope, and repeat until I had the exact spot. I would then trace the exact spot with the black sharpie and use ethanol to wipe away the hectic red markings on the bottom of my dish. I then moved my cells to the tissue culture hood and uncovered them. 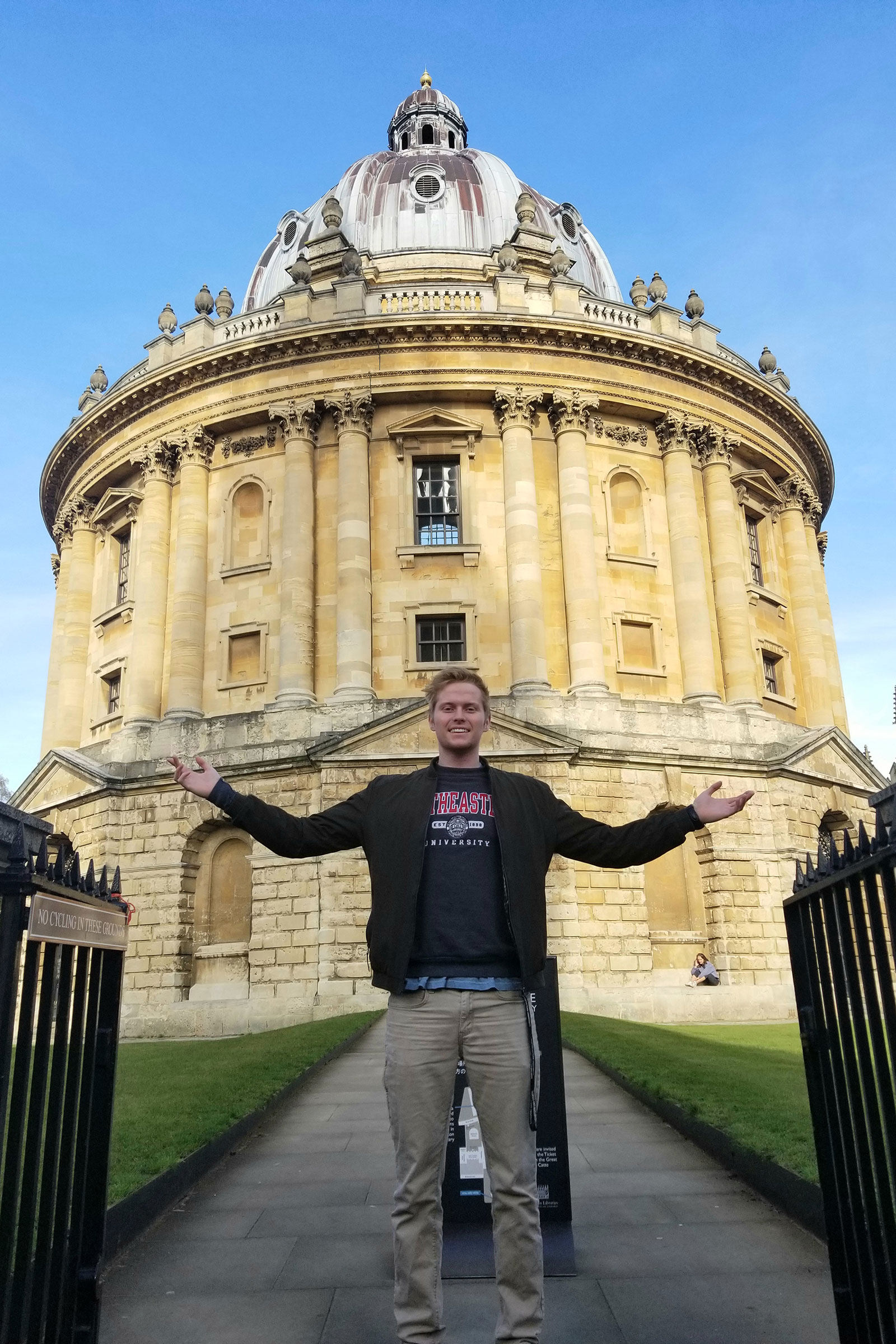 Next up, I needed a pick. Although I didn’t have any Platinum wire lying around (what we make worm picks with at Northeastern), I did have a plethora of P20 pipette tips at my disposal. I took a pipette tip and used a sterilized coin to make a flat edge at the tip of my new makeshift pick. Now, time for the extraction. I used my new pick, directed by the small black circle at the bottom of my well, to scoop up the differentiating cells. However, after a couple of trials I realized that my new method wasn’t quite accurate enough. In a tissue culture hood, you can’t get close to your samples due to a glass barrier and as a result, my pick alignment would be off and I would pick up the wrong cells. Hence, the “water microscope”. As a kid, I learned on TV that the curvature of water droplets mimics a convex lens and creates a slight magnification. So, before my dad got me the ‘scope, I would put a droplet of water on a small piece of glass to better inspect small specimens.

A decade later, despite being in a room with hundreds of thousands of dollars worth of microscopes, I decided to go back to my roots and use a magnification trick I learned about as an eleven-year-old. I couldn’t use any of the expensive microscope equipment or lenses in the hood, but I could use the microscope slides. By placing a microscope slide on top of my well with cells in it, pipetting about 10 microliters of water on the slide, tilting the slide and well toward me, and moving the slide around until the little black circle encompassing my unwanted cells was focused in the droplet of water, I could better direct my pick and remove the unwanted cells. The trick was by no means pretty, but it worked.

Ultimately, despite the roadblocks, I was able to complete the first goal of my project at Oxford. Using CRISPR inhibition, I successfully knocked down the expression of OTX2 (my gene of interest) over 80% in iPSCs. Next, I’ll begin neuronal induction of my genetically engineered iPSCs to study the effect OTX2 has on neuron development and physiology. I’m sure I’ll encounter more problems in the next part of my co-op, but there’s something about biking to work every day through the oldest English-speaking university in the world that gives me the motivation to keep finding creative solutions for the roadblocks I encounter. Scientists have been overcoming difficulties in their research for centuries, and⁠—with a little bit of creativity⁠—so can I.