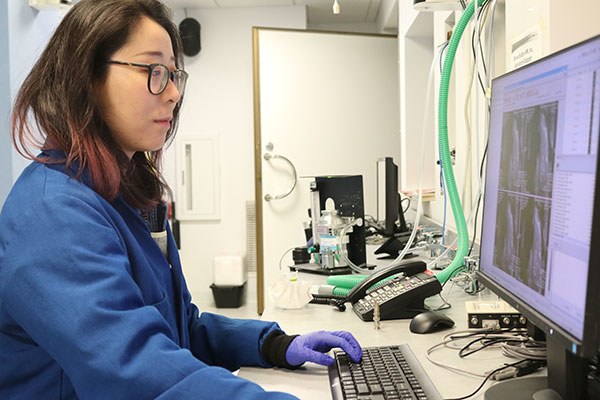 Xuezhu Cai has a theory about Parkinson’s Disease.

What if the disease is caused by a failure of glymphatic system, the recently-discovered network that drains toxic biological waste produced by brain cells. If this theory is correct, it could lead to earlier diagnosis and intervention that can restore the drainage system before too much damage is done.

“The problem now is that once a person shows motor symptoms of Parkinson’s, it’s already too late,” said Cai, who is earning her PhD in bioengineering and participating in the Experiential PhD program. “The harmful protein accumulation (alpha-synuclein) and an enormous loss of dopaminergic neurons, which are the major pathological hallmarks of the disease, are an irreversible process that cannot be stopped with treatment.”

In August 2019, Cai published a paper in the Proceedings of the National Academy of Sciences that confirmed that the glymphatic system varies with the dark/light circadian cycle despite the subject’s state of wakefulness. The paper also establishes a strong correlation between glymphatic activity and brain temperature.

“The discovery that this is driven by brain temperature is a game-changer,” said Professor of Psychology and Pharmaceutical Sciences Craig Ferris, director of the Center for Translational Neuroimaging at Northeastern and Cai’s PhD faculty advisor. “It has the potential to open a new line of investigation into the glymphatic system and degenerative brain disease.”

Ferris said Cai’s upcoming paper on traumatic brain injury is likely to have an even bigger impact. This paper will demonstrate that mild knocks to the head in a 48-hour period can damage the glymphatic system in rats. Although there appears to be no significant injury at first, her research shows that three weeks later the flow of the glymphatic system has declined.

Cai believes that this finding could explain health problems among several groups prone to minor head injuries, including veterans, football players, and the elderly.

In addition to her research at Northeastern, in 2018 Cai did an internship at Sanofi Genzyme, where she worked with neuro fluorescent imaging and Micro CT imaging.

“I learned a lot of things I couldn’t have learned working in a lab, including how pharmaceutical companies operate and process data,” she said.

This experience sparked her fascination with the blend of bioengineering and data science, and she spent the next year earning seven online certificates in programming, AI, and machine learning.

While working on her PhD, Cai is also enrolled in LEADERs, a graduate program that provides leadership training to graduate students interested in managing teams of future innovators. As part of the program, she’s working at Merck 20 hours a week in the safety assessment team, which is analyzing 50 years of company data to make safety projections for new medicines. She is currently leading a project on content-based image retrieval with digitized histopathology images.

“Goal is to combine bioengineering knowledge with advanced AI technology,” she said. “This is the direction I would like my career to take. I want to stay in healthcare but want to do more computational work rather than work in a lab. I want to be working on product-related tasks.”