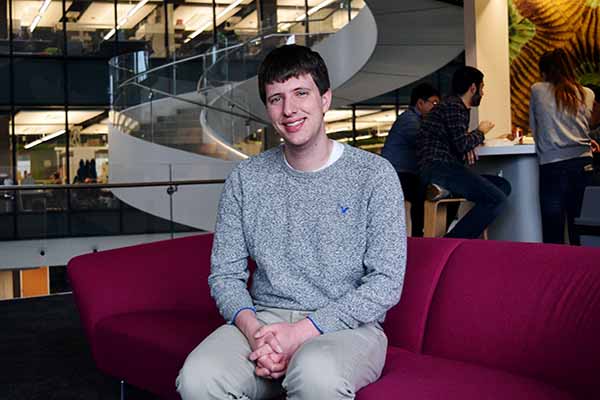 Prior to the end of each spring semester, the Office of the Provost announces the winners of the Northeastern University President’s Award, highlighting the top ten students by grade-point average of each university class. This year, Michael Tormey is one of the 10 students from the class of 2020 recognized with a 2019 President’s Award. “I’m always working on something,” he said. “I think it’s sometimes easy in that process to lose sight of what I’m working towards… to know that I’m in the Top 10 by GPA is both humbling and overwhelming.”  For Michael, set to graduate with a double bachelor’s in Civil Engineering and Economics, it marks the second year in a row in which he has received the honor.

Since he was a child, Michael knew what he wanted to do. He excelled at math and sciences, and knew engineering was the field where he could put those talents to work. Entering Northeastern, he declared Civil Engineering as his intended major. “I enjoy Civil in particular because it’s the most people- and society-centered engineering profession,” Michael said. Through his co-ops, study abroad opportunities and research with faculty, he’s gained real-world opportunities to make an impact. “Every day I’m solving problems and engaging with topics that have direct relevance on the health, safety, and welfare of the public.”

Beyond the heavy course load of his double-major, he has completed two co-ops, and recently accepted a third. His first co-op was with the Land Development Team of VHB: “I loved the idea of building something like Assembly Row in Somerville out of almost nothing, and I was so excited to be on the team to bring those projects to life,” he said. Building on the skills he’s learned at VHB, he started his second co-op with the Boston Planning and Development Agency. It was the perfect co-op. “I learned so much, and I loved going to work every day. I was able to truly make a difference in how people get around the city: I was performing development review, conceptual planning for bus and bike lanes, management of large-scale transportation studies and projects, and organization of public meetings,” Michael reflected. The job wasn’t just about learning, he was actually making a difference in the work the agency was doing. “The BPDA’s Glover’s Corner planning process is wrapping up, and I was the person responsible for identifying and demonstrating the viability of the agency’s official suite of short-term transportation improvement recommendations.”

His third co-op will see him join the new Transit Team at the Boston Transportation Department, where he will help implement bus-only lanes throughout the city and assist the Vision Zero team on city-wide pedestrian and cyclist safety improvements. Michael’s co-ops have helped him discover about which facet of civil engineering he is most passionate. “In Transportation Planning, I have really hit my stride… when I graduate, I’ll have a year of work experience with the City of Boston on my resume doing Transportation Planning. That’s huge.”

Outside of co-op and class, Michael is heavily involved in student life and research. He serves as a Senior Resident Assistant, tour guide, admissions associate, development mentor, and an Honors Ambassador, where he is sometimes enlisted to don the Paws mascot suit for admissions events. A previous member of Pep Band, he is also a student coordinator and team leader for Alternative Spring Break, where he has helped plan trips to San Francisco, Cuba, and Tucson. During his freshmen and sophomore years, Michael worked with CDM Smith Professor and Chair Jerome Hajjar on his large- and small-scale structural modeling and testing work. “This was really important and valuable experience for me as I just started getting my feet wet with ‘research’ at Northeastern,” Michael said. His other forays into research came from a 2016 Dialogue of Civilizations trip he took to India with Professor Auroop Ganguly to study climate change, a trip he would repeat the following year as an independent researcher. He studied the political, social, and economic mechanisms by which cities can promote, protect, and develop green spaces as they grow in population. Supported by the Summer Scholars Independent Research Fellowship, he traveled to Singapore and Jakarta, Indonesia to conduct more fieldwork. He presented his findings at the Urban Affairs Association conference in Toronto, the Smart Cities Connect conference in Kansas City, and Northeastern’s RISE.

Michael’s experiences at Northeastern have helped shaped his goals for after graduation, when he wants to pursue a Masters of Public Policy focused on transportation planning. “I see myself being able to make a difference, at first, as a planner and activist locally and regionally before pursuing further impact as a state and national policymaker in transportation planning,” said Michael. “My time at Northeastern has completely set me up for that. Through my experiences on campus, in Boston, and around the world, I was empowered to find what I’m passionate about and work to pursue it.”

Michael Tormey is a finalist from the State of Maine for a 2019 Truman Scholarship. This past fall, he earned the Student Scholarship from the Boston Chapter of the Young Professionals in Transportation. Last year, he won the ACEC/Massachusetts State Scholarship, as well as the national ACEC scholarship.