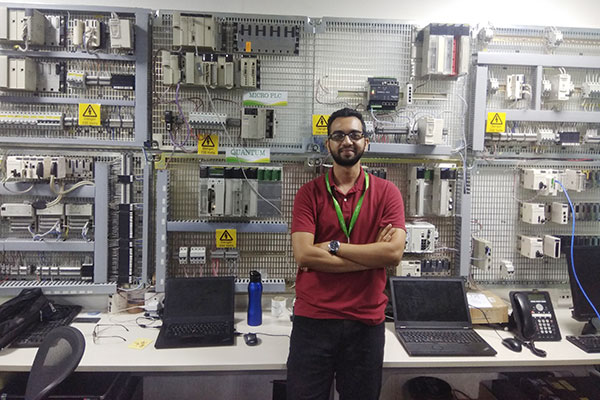 Picture caption: Vatsal Prakash, ME’20, MS in engineering management, in the Level 2 Technical Support lab while on co-op at Schneider Electric in India.

After coming to a new country halfway around the world for school, MS in Engineering Management student Vatsal Prakash, ME’20, went back home for a co-op opportunity at a Fortune 500 company.

Prakash received his undergraduate graduate at the Vellore Institute of Technology in the South Indian State of Tamil Nadu. His plan was always to pursue a master’s, and the program at Northeastern was exactly what he was looking for.

“The United States was on my list of countries to study in because it has the best schools in the world. I chose to come to Northeastern because I got into the program that I wanted,” said Prakash. “I’ve always wanted to pursue engineering but at the same time wanted to get some exposure on how the process of planning, controlling, organizing, etc. happens in an organization.”

When it was time for co-op, Prakash applied to positions in the states and as well as globally. Thanks to some help, he was able to find a co-op that was the right fit.

“NUCareers helped a lot, it was comparatively easy. Applying to companies from there was much faster compared to finding a company on LinkedIn or Indeed,” said Prakash. “The process was very direct. My global co-op coordinator, Sally Conant, helped me with sending my applications.”

“I took the first opportunity that came my way,” he said.  “I didn’t second guess it because my co-op was with Schneider Electric in New Delhi—one of the Fortune 500 companies. And it turned out to be a great experience.”

Placed on the marketing team, Prakash mostly worked with programmable logic controllers (PLC), which is a specialized computer used to control machines and can automate the entire industrial process. While hot standby PLCs are the industry standard, which activate as a backup if the main PLC fails, Prakash studied the market to find the niche necessary for warm standby systems. The warm standby systems have a slower response rate than a hot standby by a few milliseconds. He also worked with standalone PLCs, which have no backups, and programmed them to work together as a warm standby system.

“The good thing about this was that I spent most of my time working in the lab,” said Prakash. “The lab is for Schneider’s LEVEL 2 technical support team for all of the Southeast Asia region. It was fun because I was surrounded by engineers who were friendly, super smart and helped me learn. I made a lot of friends and it was pretty relaxed.”

Through his experiences on global co-op and through classes at Northeastern, Prakash has learned more about what he wants to do with his future.

“After this co-op, I plan to pursue a career in industrial automation. I really liked what I was doing over at Schneider Electric. I want to keep working on PLCs,” said Prakash.

And he’s also learned more about the world around him.

“My experience at Northeastern has been so good. I’ve made so many friends from different parts of the world, different backgrounds, different colleges,” said Prakash. “I’ve gotten a lot of new perspectives in the last two years which I wouldn’t have gotten if I hadn’t come to Northeastern.