"Airports spend millions of dollars over the course of every year double-checking the information that agents receive from personal screening devices, so making this process better and faster is a win for both the public and the industry." Michael Silevitch, ALERT Director, and College of Engineering Distinguished Professor, Electrical and Computer Engineering 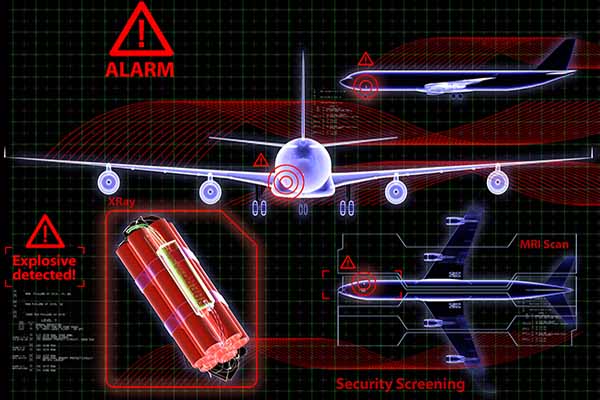 This article originally appeared in the 2020 Engineering @ Northeastern magazine.

Northeastern’s ALERT (Awareness and Localization of Explosives-Related Threats) is one of nine Department of Homeland (DHS) Security Centers of Excellence (COEs) located across the country. A multi-university center, ALERT conducts research and development for effective responses to explosives-related threats.

ALERT is funded by a core grant from the U.S. Department of Homeland Security Science and Technology Directorate that equates to roughly $3.6 million a year. In addition to the Center’s ongoing core research award, DHS also provides each COE with an ability to obtain task order contracts targeted to develop specific security technologies and methods.

Since June 2019, five such task orders involving initiatives to make airports safer have been awarded to ALERT at Northeastern. These projects focus on making baggage and cargo scanning processes more effective, streamlined, and cost-effective; improving the experience of people traversing airport security checkpoints; and developing consistent and measurable methods for explosives detection.

The first task order is focused on improving the detection capabilities of airport passenger screening systems to make physical pat-downs in the airport security checkpoint less necessary. This project is funded at $1.2 million, with Carey Rappaport, ALERT researcher and College of Engineering Distinguished Professor, electrical and computer engineering, serving as technical lead.

“Airports spend millions of dollars over the course of every year double-checking the information that agents receive from personal screening devices, so making this process better and faster is a win for both the public and the industry,” says ALERT Director and College of Engineering Distinguished Professor Michael Silevitch, electrical and computer engineering.

A second task order looks at improving a crucial piece of secondary airport screening by systematizing the swabbing of hands, liquid containers, shoes, and the like, looking for traces of chemicals or explosives. With this $650K grant, ALERT is seeking to compare and evaluate the performance of all of the swab kits used by airports across the country.

“If we can benchmark the performance of these swabs and create a gold standard, we can better define the protocol to measure the performance from airport to airport—apples to apples,” says Silevitch.

Enhancing the efficiency of airport security checkpoints is the focus of the $1.3 million task order leveraging video analytics to improve the airport checkpoint process. This project’s aims include understanding checkpoint wait times, supporting risk-based screening to improve throughput rates, and helping identify when someone may have forgotten an item at the checkpoint, or a possible theft.

“Not only could we possibly make the process more user-friendly and streamlined, but we could also catch anomalies, such as theft and accidental leave-behinds,” says Silevitch. “The TSA can’t just throw those items away, so the documentation, as well as handling and storage, is time-consuming and costly—I even heard of someone who left a snake behind, which then had to be cared for by TSA! If we can flag events like that in real-time, we can eliminate the issue altogether.”

Out of the terminal and into the parts of the airport most of us never go are the areas impacted by the fourth and fifth task orders: an $800K grant to create simulation tools to visualize the contents of air cargo containers, and a $690K grant to develop a more effective system to detect opioids transmitted through international mail.

“More than one million international postal items come through JFK Airport every day—and that’s just a single airport,” says Rappaport. “Most of it is legitimate, but it’s our job to better judge which ones have the bad stuff in them.”

There are several approaches to tackle the problem, but Rappaport and technical lead Silevitch are seeking a non-invasive way to screen packages that optimizes worker safety and minimizes sensing time. One option is to use millimeter wave scanning devices to search relatively small packages for loose pills or powder and target them for closer inspection.

“Throughout all five of these task orders, DHS wants the U.S. and the world, in general, to be safer,” says Rappaport. “At ALERT, we try to develop expertise to address these hard problems.”