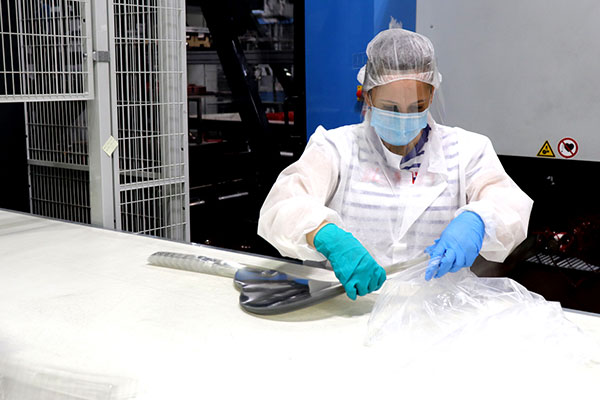 Main photo: A Lacerta worker, a company founded by two brothers and their cousin, who all studied engineering at Northeastern, places new faces shields in bags. Photo by Azita Lotfi/Lacerta

When Mostafa Lotfi gets a voice mail, it’s usually about something mundane.

Mostafa is a partner of Lacerta Group Inc. in Mansfield, Massachusetts, a family-owned business that manufactures plastic packaging. Usually his calls are from customers asking for a product to be shipped or a package designed in a hurry. But this time it was the tearful voice of a woman from nearby Attleboro, pleading for his help. She’d heard that Lacerta had just entered the COVID-19 arena and was manufacturing protective face shields for health workers; the company is ramping up to produce millions of them per day. She was desperate for protection for her daughter, a nurse at a New Hampshire hospital and the mother of 9-month-old twins. The hospital was on the front lines of the pandemic but was short of face masks and she was terrified her daughter would be infected.

“I couldn’t even finish listening to her message,” said Lotfi, who studied mechanical engineering at Northeastern. “She asked me for 18 face shields and I offered to give her 600 to share with the hospital.”

He added: “I’m ashamed to be in this situation where a piece of plastic that we’re making is such a big deal. Doctors and other people who save our lives should not be in this position.”

The Lotfis are accustomed to challenges. The company was founded in 1993 by Mostafa and his two cousins, Ali and Mori. Each of them left Iran in 1978 as teenagers, in the early phase of the Iranian Revolution. Mostafa and Mory were only 14. Ali came first, then Mostafa, then Mory six months later. None of them knew English.

“My parents’ decision was for me to go abroad to continue my education,” Ali said. “I came here without a plan other than to find a school and go to school.”

All three studied mechanical engineering at Northeastern, and Ali and Mory went on to earn master’s degrees in the same field, both graduating in 1988. Ali, who is president of Lacerta, is responsible for sales; Mory, whose daughter is a sophomore at Northeastern, looks after the financial side of the business. Mostafa oversees production and manufacturing. (Two of Ali’s daughters and Mostafa’s two sons also work for Lacerta.)

Lacerta didn’t start out as a packaging company; in its early years it specialized in recycling data cartridges and magnetic media such as floppy disks, cassettes and VHS tapes. Eventually it turned to packaging for Polaroid, “and we thought “why not pursue this as a food packaging company?,” Mostafa said.

Many of their products would be familiar to anyone who’s pushed a cart through a supermarket. They include containers for hummus and salsa, sectioned packaging for fruit platters, and tamper-resistant snack packs. Lacerta also produces packaging for industrial and retail use, as well as medical and electronics packaging, and custom production.

The production area where plastic is extruded; later it will be stamped into the shape of face shields. Photos by Azita Lotfi/Lacerta

The company prides itself on quick turnaround and nimble production; its website declares: “We know that FAST matters.” So switching gears to plastic face shields seemed almost like a matter of course.

The company has 370 employees and three facilities in Mansfield, plus an operation in California and a sister company in Mexico. It has the in-house capability to perform every aspect of production for face shields from designing and creating molds to making plastic sheets and thermoforming (converting plastic sheets to plastic parts.)

“It took us basically two days to design and go to production,” Mostafa said. They saw the need to move quickly after getting a group email from a doctor friend who was looking for face masks for his hospital, which had a shortage of N95 masks, the standard for filtering out coronavirus.

Mostafa already had 500 of these masks at Lacerta because his workers used them to filter out dust.

“We decided that instead of us using them we’d donate them to his hospital,” said Mostafa. “And then we decided to start making plastic face shields.”

They started production the last week of March. Intended for one-time use, the shields cover the face from the forehead to an inch or so below the chin and are fully adjustable.

“Our face shield is as good of a design as Apple,” said Mostafa, a reference to Apple’s recent announcement that it plans to produce 1 million face shields per week. “We can produce 400,000 to 500,000 per day and can ramp up to millions per day.”

Lacerta’s shields are packaged in groups of 200 and delivered to hospitals, health workers, EMTs and others on the front lines of battling COVID-19. Lacerta will donate up to 1,000 face shields to hospitals and other organizations, and sell others at cost—about 40 cents each.

The company is scaling back on its other products for now. As for how the company will make money, “we’ll leave that for later,” Ali said. “We are a healthy company and we’ve been growing.”

“We are trying to do a good deed,” Mory added.

Mostafa is hoping the company’s face shield phase won’t need to go on endlessly but “we will do whatever it takes.” he said. “If people ask us, we will make them. It’s our duty to help each other.”