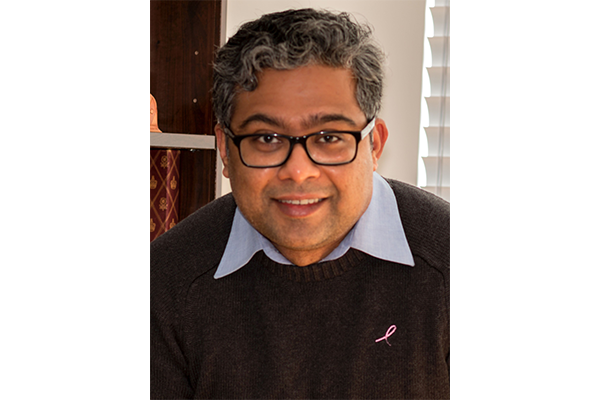 BioE Assistant Professor Harikrishnan Parameswaran recently had a research paper published in Science Advances. Along with fellow Northeastern researchers Suzanne Stasiak, Ryan Jamieson, Jeff Bouffard, and Professor Erin Cram from the Dept. of Biology, Parameswaran wanted to gain a better understanding of why asthmatics can still be at-risk for an asthma attack even when there is no inflammation in their airways and the patient is symptom free.

Parameswaran explained that it appeared that asthma attacks may be the result of when the body incorrectly sensed the concentration or dose of inhaled agonists.

In the airway, the smooth muscle cells form a single layer of connected cells that wind around the airway in a helical fashion. When the airway smooth muscle is exposed to an agonist, the individual cells will start to communicate with each other using force.

“When the cells communicate with each other, it can completely change how each cell within the ensemble senses the contractile stimulus and the overall generated force,” he said.

To see how cells communicate with one another, the research team added a small dose of histamine, a smooth muscle contractile agonist, into cells. The smooth muscle cells were loaded with a calcium-sensitive dye, allowing the researchers to view changes under a microscope. The colors changed, indicating increasing levels of calcium in the cell. The team monitored the color changes to see how external forces altered the calcium waves in cells.

The team found that healthy human smooth muscle cells falsely sense a much higher contractile stimulus than they actually received. This can happen when “pathological changes in the mechanical properties of the extracellular matrix that surrounds and supports smooth muscle cells in tissue” interfere with the force-based intercellular communication.

Therefore, it is necessary to therapeutically target extracellular matrix remodeling, Parameswaran said. Asthma therapies have previously focused on the idea that excessive constriction of the smooth muscle was caused by a dysfunction in the muscle itself. But Parameswaran explained that when an individual cell has a distorted perception of a contractile stimulus, it can lead to an incorrect collective response.

Research that hits close to home

For Parameswaran, this research is personal. Both his father and brother are asthmatics.

“It can become very hard to watch after a while,” he said. “For my father, it is very difficult for him. He can’t do all of the things that he used to enjoy.”

Nearly 300 million people worldwide suffer from asthma, Parameswaran said, and the therapies available for the disease have not changed.

“The treatment options on the market right now are all basically different versions of the same thing,” he noted. “An individual can be seemingly fine, go out for a run, and still have an asthma attack. The concern is: why can an asthmatic have symptoms even if the inflammatory trigger is gone from the system?

“I hope that this research will have far-reaching benefits. If pathological changes in the extracellular matrix can be successfully targeted for therapy, it cannot only impact asthma therapy but also potential treatments for hypertension and other diseases. We hope that this approach will be able to effect a lasting cure for the millions who suffer from asthma.”

Related Story: Cells in your airway talk to each other. For some, what they say can trigger an asthma attack.