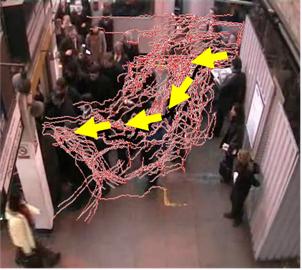 Inauguration of the DHS Research Center of Excellence for Explosives Detection, Mitigation & Response.

Northeastern University will inaugurate the Center for Awareness and Localization of Explosives-Related Threats (ALERT) on Thursday, October 30, 2008. ALERT, a new research Center of Excellence for Explosives Detection, Mitigation & Response, is funded by the Department of Homeland Security.

The ceremony will begin at 10:00 a.m. in the Raytheon Amphitheatre, located in Northeastern’s Egan Research Center, 120 Forsyth Street, Boston. (For a campus map, click on the following link: http://www.northeastern.edu/campusmap/). Northeastern President Joseph E. Aoun will make the opening remarks, followed by Jay M. Cohen, Undersecretary for Science & Technology for the Department of Homeland Security.

(Image: An example of video analysis used to detect anomalous behaviors such as potential suicide bombers and other terrorists)

State-of-the-art homeland security technologies that are currently being developed by ALERT industrial partners, including Analogic, General Electric, Raytheon, Siemens, American Science & Engineering and Zomega, will be showcased from 10:45 a.m. – 1:30 p.m.

“The ALERT team represents leaders of industry and academia, and I am confident that the research done by ALERT will be translated into highly-effective methods of preventing terrorist attacks,” says Northeastern Professor Michael Silevitch, co-Director of ALERT.

About the ALERT Center

Co-led by Northeastern and the University of Rhode Island, ALERT is a partnership between leaders in academia, industry and laboratories that are collaborating on research projects that will lead to the development of cutting-edge technology to protect the United States from explosive-related threats.  ALERT research focuses on the long-range needs of homeland security, including developing an ultra-reliable passenger and cargo screening method, the neutralization of newly improvised explosives, detection of suicide bombers at ranges as great as a football field using infrared or radar technology and the design of blast resistant composite materials.

Northeastern’s Bernard M. Gordon Center for Subsurface Sensing & Imaging Systems (Gordon-CenSSIS), a National Science Foundation Engineering Research Center, will host the 9th annual RICC on Wednesday and Thursday, October 29 and 30, 2008. The two-day conference will feature presentations and workshops by members of industry, academia and government and will provide the opportunity for attendees to talk about ways in which they can collaborate. The focus this year will be on advanced sensing and imaging technologies.

On Wednesday, October 29, there will be a series of talks focusing on advanced homeland security and biomedical technologies. Following these talks, lunch will be served and students will present their research in a poster session. In addition, there will be a celebration of ALERT with speakers from the Department of Homeland Security (DHS) and state government.

On Thursday, October 30, the sessions will focus on terahertz wave imaging and spectroscopy and it’s applications in medicine, pharmaceuticals and biology.  Presentations will be made by experts from institutions such as the DHS, the University of Liverpool, the Naval Surface Warfare Center, Nagoya University and MIT.

For a full schedule of events and sessions, please click on the following link:http://www.censsis.neu.edu/RICC/2008/