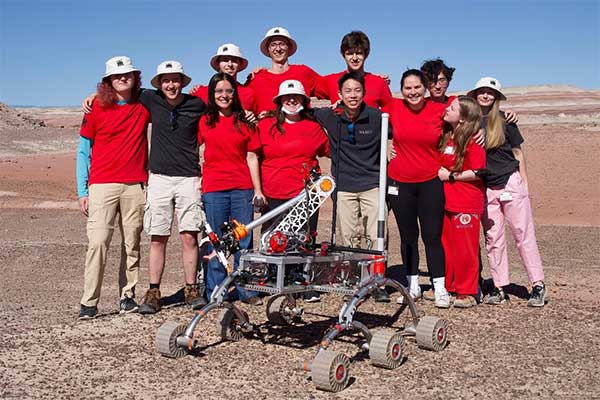 From concrete to Martian dust, students prepare a rover for the upcoming global University Rover Challenge

In recent weeks, those walking around Northeastern University’s Boston campus have been joined by an unexpected companion: a Mars rover.

Rolling across the bricks and concrete of the campus’ walkways instead of the crimson dirt of the Red Planet, Watney Mark 3.0 has been embarking on a series of test drives ahead of the Northeastern Mars Rover Team competing in the Mars Society’s University Rover Challenge.

This year’s challenge is a test drive for more than just the team’s robotic campus-goer. NUROVER’s leadership is made up of underclassmen who were thrust into the spotlight after the team’s upperclassmen leadership left last year due to the difficulties of the pandemic. For the 15 to 20 core members, this year has been about assembling a cohesive team as much as it has been about molding, soldering and testing the rover.

“You could have the best rover in the world. You could have the technically best arm, the technically best drive system, but really what it comes down to is just having a team who works well together and a team who has practiced,” Garrit Strenge, NUROVER’s team lead, said as his team tinkered with the rover in the College of Engineering’s Maker Space.

Northeastern’s entry in this year’s University Rover Challenge is almost a complete redesign of the rover. Photos by Matthew Modoono/Northeastern University

In the University Rover Challenge, teams representing schools from around the world compete in the desert of southern Utah June 1-4. In an engineering crucible, the rovers attempt to replicate tasks typically accomplished by actual Mars rovers, from life detection and autonomous travel to retrieval and equipment servicing.

This year’s event will be the first in-person challenge since the COVID-19 pandemic began in 2020. Last year, a few months before the challenge was set to occur, the Mars Society canceled the event, only to reverse course two weeks before the event’s start date. This left most teams, including Northeastern’s, scrambling to prepare.

“We had an option to say, ‘No,’ but for some reason we said, ‘Yes,’ ” electrical lead Benjamin Thacher said. “We failed pretty horribly, but it was really fun.

Coming out of the competition last summer, much of the upperclassmen leadership either graduated or left the team. NUROVER’s future was uncertain, but Strenge, Thacher and a few other team members stepped up.

“If no one else picked it up, it was just going to simmer out and fall,” Strenge said. “We decided we’re going to come together, recruit people and basically try to allow other people to experience the same group feeling we felt and hope to do that for years to come.”

With entirely new leadership and membership, NUROVER has focused on team building just as much as the design, assembly and testing of its rover. Photos by Matthew Modoono/Northeastern University

Like the team of engineers that will be operating it, this year’s rover is different in all but name–Watney Mark, a reference to Matt Damon’s protagonist in “The Martian.” The chassis is largely unchanged, but the internal electronics and the robotic arm have all been designed from the ground up to make the rover better, stronger and more streamlined.

The arm now has “six degrees of freedom,” Strenge said, allowing it “to reach any position we need to reach.” Inside, the electric guts of the rover–a set of custom printed circuit boards designed by Thacher and his team–have been laid out to avoid the mass of tangled, twisting wires that took up the entirety of the chassis in last year’s rover.

“’Fail fast’ is the mentality we use, so we make a part, run it through as many exaggerated situations as we can until it breaks, figure out why it breaks and improve upon it,” Strenge said.

Watching Watney Mark 3.0 come to “life” piece by painstakingly designed piece has been “awesome,” mechanical engineer Grace McDonough said. The integration process, when the team is testing how each individual element works in harmony, has been particularly rewarding.

“I can design wheels or build this leg system, but how is that going to interface with the electrical system and how is this going to be controlled by software?” McDonough said. “How is that going to contribute to fulfilling the mission objectives for each of those challenges?”

Whether the team’s hard work has paid off will be decided in the desert, but the team is confident that even if Watney Mark 3.0 bites the dust, they have laid the foundation for success in the future.

“We really have learned that the biggest thing is getting everyone to know each other, getting a close-knit team, which is really setting us up well for next year,” Strenge said.