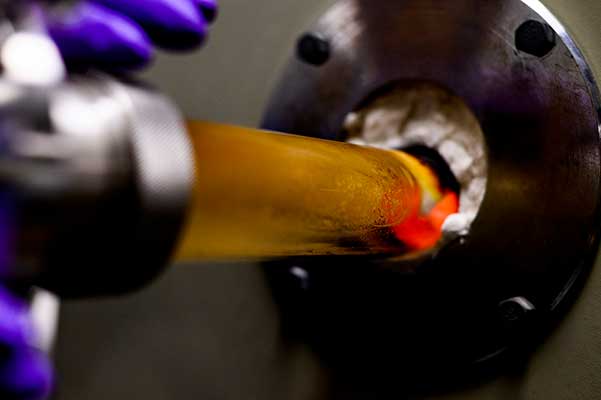 MIE Professors Yung Joon Jung and Moneesh Upmanyu have discovered a new, highly dense form of silicon that could revolutionize the semiconductor industry.

After a 10-year research study that started by accident and was met with skepticism, a team of Northeastern University mechanical engineers was able to synthesize highly dense, ultra-narrow silicon nanowires that could revolutionize the semiconductor industry.

Yung Joon Jung, Northeastern professor of mechanical and industrial engineering, says it might have been his favorite research project.

“Everything is new, and it required a lot of perseverance,” says Jung, who specializes in engineering and application of nanostructure systems and previously studied carbon nanotubes.

Jung and his collaborators, including another Northeastern professor of mechanical engineering, Moneesh Upmanyu, have achieved a major advancement in nanowire synthesis by discovering a new, highly dense form of silicon and mastering a new, scalable catalyst-free etching process to produce ultra-small silicon nanowires of two to five nanometers in diameter.

About 10 years ago, students brought Jung’s attention to an unusual result of an experiment they were conducting using silicon wafers. The material he saw under an electron microscope was different from the one they intended to produce, Jung says.

He decided to find out more about this substance and discovered that it was silicon with “a very, very tiny” wire-like nanostructure, Jung says. They were able to reproduce the new material, he says, but when they tried to improve the synthesis process the nanowires didn’t grow.

The scientist and his team had to rewind and study, from the beginning, the synthesis mechanism and the material’s atomic-scale structure and properties. Jung, an experimentalist, decided to enlist Upmanyu, who uses theory, computer modeling and simulation to understand materials and explain experiments.

“I always need help from Moneesh to understand what is happening,” Jung says.

The scientists thought that maybe the substance resulting from silicon wafers during synthesis was not silicon at all. The material had a highly compressed structure, reduced by 10% to 20% compared to regular silicon, which normally is not stable in such a compressed state, Upmanyu says.

Through the computational analysis and modeling, Upmanyu was able to show that, despite unusual properties, the new material was a form of silicon with a very thin layer of oxide on top, which probably helps sustain the compression, he says.

“This material is very promising,” he says. “That compression, I feel, is at the heart of all the interesting properties you see.”

One of the reasons silicon is widely used as a semiconductor in microelectronics such as computer chips, integrated circuits, transistors, silicon diodes and liquid crystal displays is that it is cheap and abundant, Upmanyu says. According to the Royal Society of Chemistry, it is the second most abundant element in the Earth’s crust after oxygen, but it does not occur in its pure, uncombined state in nature. It can be found in sand, quartz, flint, granite, mica and clay, among other stones and minerals.

In the 1970s, the thriving silicon computer chip industry even gave a new name to the southern region of the San Francisco Bay—“Silicon Valley”— which was popularized by Don Hoefler, an Electronic News Magazine reporter.

However, traditional silicon cannot withstand high temperatures and, hence, is limited to lower-power applications. It has a bandgap of 1.11 electron Volts (bandgap determines the energy needed to make the electrons in the semiconducting material conduct electricity upon being stimulated by external sources).

The new material has an ultra-wide bandgap of 4.16 eV—a world record, Jung says. The ultra-wide bandgap implies that the material needs larger stimuli to conduct electricity, but can operate at high power, high temperature and high frequencies. Silicon nanowires produced from this new material will be suitable for power electronics, transistors, diodes and LED devices, Jung says.

Unlike regular silicon, the new material is highly resistant to oxidation. It is also photoluminant—able to emit blue and purple light, which can be used for ultraviolet lighting and in blue light diodes.

Jung and his research team have also created a new method of producing silicon nanowires, called chemical vapor etching, which removes material instead of growing crystals. As a result, they can make nanowires that are 10 to 20 times smaller than the silicon nanowires currently used commercially.

“The catalyst-free aspect cannot be overstated enough, as it eliminates the need to remove the catalyst after synthesis, which invariably degrades the functional properties of the nanowires,” Jung says.

Sometimes, catalyst particles become part of the nanowire surface, he says, and their removal is almost impossible.

At this point, the scientists can reproduce nanowires with controlled length of up to 100 micron.

“I feel a broad impact going forward,” Upmanyu says. “This chemical vapor etching method that he [Jung] has pioneered, is going to be useful for a host of other materials … You can think of not just electronic applications, but any application where you want to have a small-size dimension of a material made. … It is very powerful.”

He says that the new silicon material should be very attractive for the semiconductor industry. It can be used in military radios, radars and in photovoltaics like solar cells. Regular silicon bandgap does not allow to process ultraviolet light and use it for generating electricity, Upmanyu says.

“So, if you have a wide-bandgap material, which is cheap, abundant, like silicon, now you can have very high-efficiency solar cells,” he says.

It can be even used for harvesting solar energy underwater. Water absorbs the red and infrared spectrum, Upmanyu says, so solar cells that can harvest blue and ultraviolet light become crucial.

The new silicon nanowires can improve lithium ion batteries, Jung says. Further adding some select materials like phosphorus or nitrogen (a technique called doping) can lead to other interesting properties and allow other applications, Upmanyu says.

He believes that various interesting quantum phenomena can be manipulated in these silicon nanowires, due to their very small size, which makes this material promising for quantum information processing and maybe even quantum computing, Upmanyu says.

The research is not over. The scientists are still interested in understanding better all the chemistry behind the process and figuring out why the compression of this form of silicon is so stable. They want to optimize the etching process to produce a smoother surface and further scale it up for industrial application.

“You want to be able to understand the process so that you can manipulate it to what you want to do,” Upmanyu says.

They will be also looking for collaborators, interested in making devices with this new silicon material.

“You want a new form of something you made to be adopted as widely as possible. I think commercialization and device integration is the key here,” Upmanyu says.