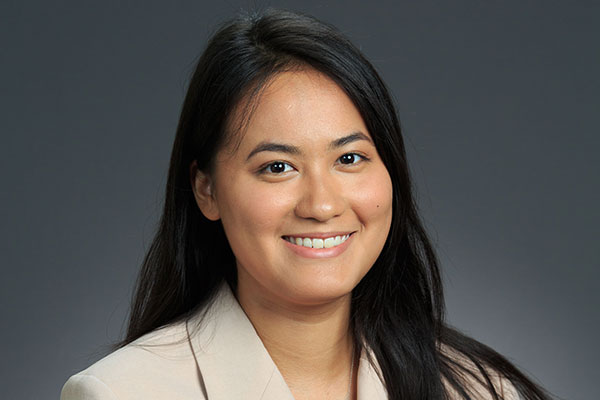 It would be easy to refer to Botakoz Koshkarova, E ’20, mechanical engineering, as a “Jack of All Trades” when looking at her co-op experiences: she has worked in the medical device, automotive, and robotics industries, in both R&D and manufacturing roles. But for Koshkarova, she simply wants to be “a good engineer.”

“I see myself developing the skills I have now, honing them,” she said. “I want to use all of the knowledge gained from my undergraduate education to solve real world problems, in the best way.”

Originally from Kazakhstan, Koshkarova first developed an interest in engineering when she participated in an exchange program with the U.S. She lived in South Carolina for one year and went to public high school, which is where she attended her first robotics competition.

For her undergraduate education, Koshkarova received a full-tuition scholarship from Northeastern. She started school with her robotics interest, and a general interest in STEM.

“First I pursued chemical engineering but then switched to mechanical,” she said. “I’ve been super happy with my decision ever since. I’ve loved everything about it.”

Koshkarova’s first co-op was at Insulet Corporation in Billerica, Massachusetts. While at the medical device company, she worked with suppliers to make sure they followed all quality and manufacturing processes to validate new equipment.

“I was working on testing in the lab, testing products, and making sure the test procedures were up-to-date and valid,” she said. “I didn’t know a lot of those procedures, but the company was very open and supportive in explaining everything to students.”

From there, Koshkarova went to Germany to work at Daimler AG, one of the largest car manufacturers in Germany and the parent company of Mercedes-Benz.

The road to Silicon Valley

Koshkarova’s third co-op stayed local, at Amazon Robotics in North Reading, Massachusetts. She was adamant that she succeeded in that cross-functional manufacturing role because of her previous two co-ops.

“[Amazon] required communication with suppliers, which I did at Insulet,” Koshkarova said. “One of Amazon’s leadership principles that they highlight is ownership. The style of work I had in Germany helped me in that case.”

She also worked with the Amazon Robotics hardware development engineering team to develop a fixture to validate plastic components.

From Amazon, Koshkarova found a full-time job at Apple as a mechanical systems design engineer.

“This opportunity has enabled me to do so many things,” she said. “I moved from the East Coast to California. I’m able to work with great, smart people, and learn from them.”

Additionally, Koshkarova has been able to find a Northeastern community way out in Silicon Valley.

“We have this whole community that often meets virtually,” she said. “There are also NU students on co-ops at Apple. It’s awesome to know NU has a lot of presence here in the Bay Area as well.”