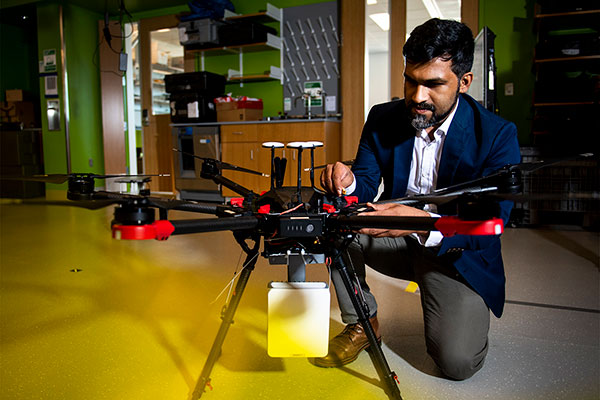 ECE Associate Professor Kaushik Chowdhury and Principal Research Scientist Yousof Naderi are working on technology that could turn any surface into a wireless charger to power several different devices simultaneously.

Main picture caption: Kaushik Chowdhury, an associate professor of electrical and computer engineering, is working with former graduate student Yousof Naderi to develop technology that transforms any surface into a smart wireless charger to power several devices simultaneously. This system can also be used to power more complex gadgets, such as airborne drones. Photo by Ruby Wallau/Northeastern University

What do a piece of plywood and a drone have in common? They can be turned into smart wireless chargers—if you ask Kaushik Chowdhury, an associate professor of electrical and computer engineering at Northeastern.

Chowdhury has been working with former graduate student Yousof Naderi on a system that transforms any surface into a wireless charger to power several electronic devices simultaneously, be they laptops, cell phones, or tablets. According to Chowdhury and Naderi, it’s simple but advanced wireless technology that could even power airborne drones.

“Our technology can sense a large variety of different kinds of electronic devices and intelligently drive enough power to charge them no matter where they are placed on the surface, or contactless in the air,” Chowdhury says. “Though likely you might not be charging a drone and a laptop at the same time.”

But you could. Chowdhury and Naderi integrate electromagnetic coils under surfaces such as table tops, arranging the coils as tiles that deliver energy to specific points on the surface.

“We have multiple of these tiles that we can place flexibly and which are not connected to each other,” Chowdhury says. “We have devised technology powered by artificial intelligence that consumes little energy on demand and automatically knows where the object must be charged.”

Kaushik Chowdhury and Yousof Naderi have been testing contactless wireless technology for over a year, and say it would be particularly helpful for large and complex gadgets such as drones, which would just need to hover around other drones with an energy transmitter. Photos by Ruby Wallau/Northeastern University

The tile network relies on machine learning algorithms that sense whether an object on the surface needs power. Energy starts flowing at one master tile, which starts a chain reaction and turns itself off after sending energy to the neighboring tile. The energy itself jumps to the second and subsequent tiles until it reaches an electronic device in need of power. It’s a software-defined, energy-hopping system that routes energy seamlessly, Naderi says. Naderi, a senior research scientist in the Next Generation Networks and Systems Lab led by Chowdhury, says this concept breaks from the wireless chargers most people are familiar with, which are designed to work with specific devices. Most wireless chargers aren’t smart enough to make coils work collaboratively to charge different types of electronics and autonomously decide to stop or release energy. That’s a major drawback for large surfaces intended to charge many objects, and something Chowdhury and Naderi are hoping to tackle. Think, for example, of a large family reunion in which different types of smartphones are charged while people eat dinner around a table.

“If we have to make a large surface of hundreds or thousands of these smaller coils, each of them will start consuming energy even if there’s nothing there,” Chowdhury says.

Chowdhury and Naderi use magnetic resonance, which transmits energy in a way similar to the way that radio waves travel through the air between a transmitter and a receiver. That’s possible because each turn of a coil is specifically designed to resonate with other coils.

“If you carefully choose what the electrical composition of these wires is, you can get two coils placed close to each other working in perfect harmony,” Chowdhury says.

This system is the basis for a new company named DeepCharge, founded in 2018 by Chowdhury and Naderi, who in prior years received National Science Foundation grants that boosted their fundamental research and commercialization.

“We didn’t just stay in the lab,” Naderi says. “As someone who got his Ph.D. at Northeastern and who continued to work here, that was the key moment: to go beyond the formula, beyond the papers, and develop the prototype into a variety of product designs.”

Chowdhury and Naderi have been testing contactless wireless technology for over a year, and say it would be particularly helpful for large and complex gadgets such as drones, which would just need to hover around other drones with an energy transmitter. Drones are known for their short battery lifetime of about 30 minutes, and can’t always land to recharge during time-critical tasks, such as delivering human organs or finding earthquake survivors.