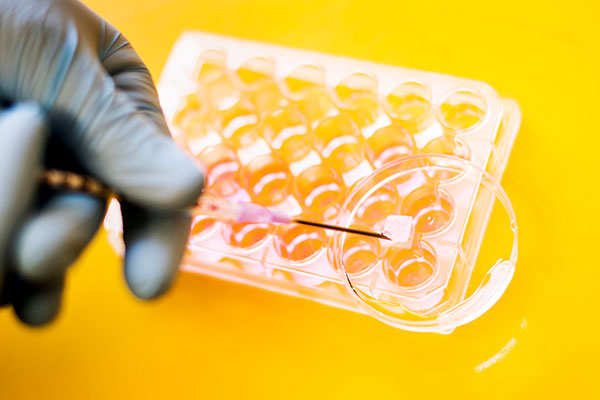 ChE Assistant Professor Sidi Bencherif created a sponge-like gel that can be injected under the skin to provide medication or target certain immune cells.

Main photo: Cryogels created by Northeastern assistant professor Sidi Bencherif can be compressed down to 90 percent of their original volume and injected with a needle. Once they’re under the skin, they swell back to their original shape. Photo by Adam Glanzman/Northeastern University

In 2010, Sidi Bencherif was working in a lab at Harvard University, trying to use a surgically implantable structure to train immune cells to target cancer.

“I didn’t think surgery was needed,” says Bencherif, who is now an assistant professor of chemical engineering at Northeastern. “I wanted to find a way to make something similar that was also injectable.”

Two years later, Bencherif and his colleagues announced a breakthrough technology: the first sponge-like gel that can be compressed and injected under the skin with a hypodermic needle. Once injected, these materials, known as cryogels, swell back to their original size and dimensions, allowing them to hold cells or treatments.

Bencherif recently published a review of the broad spectrum of ways researchers have been able to use these cryogels. Nearly 40 scientific articles have been published on the subject, from researchers around the world.

“There has been massive interest in the field,” Bencherif says. “It created a new class of biomaterials.”

Cryogels are made by binding polymers together at freezing temperatures, so that they form structures laced with ice crystals. When the polymers are thawed, the ice melts, leaving a network of pores through the cryogel. Sidi Bencherif is an assistant professor of chemical engineering in the College of Engineering at Northeastern. Photo by Adam Glanzman/Northeastern University

When the cryogel is squeezed through a needle, these pores collapse; the gel can compress down to 90 percent of its original size. Once it is out of the needle, it draws in surrounding fluid to expand back to its original volume, like a sponge absorbing water.

Researchers have been experimenting with different materials and applications, Bencherif says. In Bencherif’s lab, postdoctoral researcher Loek Eggermont is using cryogels as environments to activate or inhibit immune cells, which could help cells target diseases like blood cancer or keep them from attacking healthy cells in individuals with autoimmune diseases.

“They’re great tools to provide this environment for cells to infiltrate,” Eggermont says. “You have a very localized, three-dimensional environment that you can use to control the cells, so that you can train them to do what you want.”

Researchers are able to create a specific environment within the porous structure of the cryogel, and then inject that whole environment into the body. When the gel swells back to its original shape, the cells it draws in are exposed to the precise conditions designed by the researchers.

Other labs are using the cryogels as a scaffold to engineer and grow new tissue, as an under-the-skin filler for cosmetic surgery, as a method of delivering drugs, and even as a package for injectable sensors.

“Biosensors—that’s something I didn’t think of at the time,” Bencherif says. “People are using them to sense electrical activity or things like that.”

But there are still improvements to be made, Bencherif says. Some researchers would like to make the gel even more compressible, so that larger versions could still squeeze through a needle. Others are interested in more precisely aligned pores, to facilitate the growth of certain tissues that are that require a specific organization.

“Right now, the orientation of the ice crystals is quite uncontrolled, because it doesn’t matter for what we are doing,” Bencherif says. “But for some applications, you may want to have a structure that is more sophisticated—3D printing could be used for that.”

Bencherif hopes other researchers, with other areas of expertise, will continue to improve his cryogels and find new uses for them. Two of his patents have already been licensed by a pharmaceutical company, Novartis, for a cancer vaccine using cryogels.