ChE/MIE Professor Laura Lewis and ECE Professor Vincent Harris are working on alternatives to rare-earth metals which are used from everything from smartphones to guided missiles to reduce our reliance on China.

As the United States inches closer to a trade war with China, it’s worth considering one of the aces China holds in this high-stakes poker game—rare earth metals.

And China produces more than 80 percent of the world’s supply of rare earth metals, according to statistics compiled by the United States Geological Survey.

Countries that mine rare earths in 2017

“This is a leverage point for China,” said University Distinguished Professor of International Business and Strategy Ravi Ramamurti, an expert in emerging markets. “President Trump says he holds all the cards, but China’s monopoly on rare earths is one of the aces.”

And demand is rising. The United States’ imports of rare earth metals increased 27 percent from 2016 to 2017, according to the USGS, and maintaining that supply has been become a matter of national security, according to 2017 testimony by Sen. Lisa Murkowski, chair of the Senate Energy and Natural Resources Committee.

A trade war could prompt China to cut off supplies of rare earth metals to American manufacturers. President Trump has already dragged rare earth elements into the conflict by including them on a list of proposed tariffs announced earlier this month.

The tariffs reflect Trump’s stated goal, signed into an executive order last December, to reduce the country’s dependence on foreign sources for “critical minerals,” and therefore the diminish the risk of disruptions in the supply of materials vital for manufacturers. But efforts to find a new supply of rare earth metals, or devise technologies that supplant the need for them, are still in the early stages.

China has not overtly threatened to retaliate in a trade war by limiting the supply of rare earth metals. But it has already demonstrated its ability to do so in the past. In 2010, the Chinese slapped strict quotas on rare earth exports, throwing the world economy into a panic. Prices skyrocketed four-fold in 2010, and then doubled again in the first four months of 2011. For some rare earth metals, the price increased nearly 700 percent in less than two years.

“It was a warning shot. They put the squeeze on to show what they can do, and then they open the supply valve again,” said University Distinguished Professor of Engineering Vincent Harris, whose research is focused on finding alternatives to rare earth metals for military radar and communications. 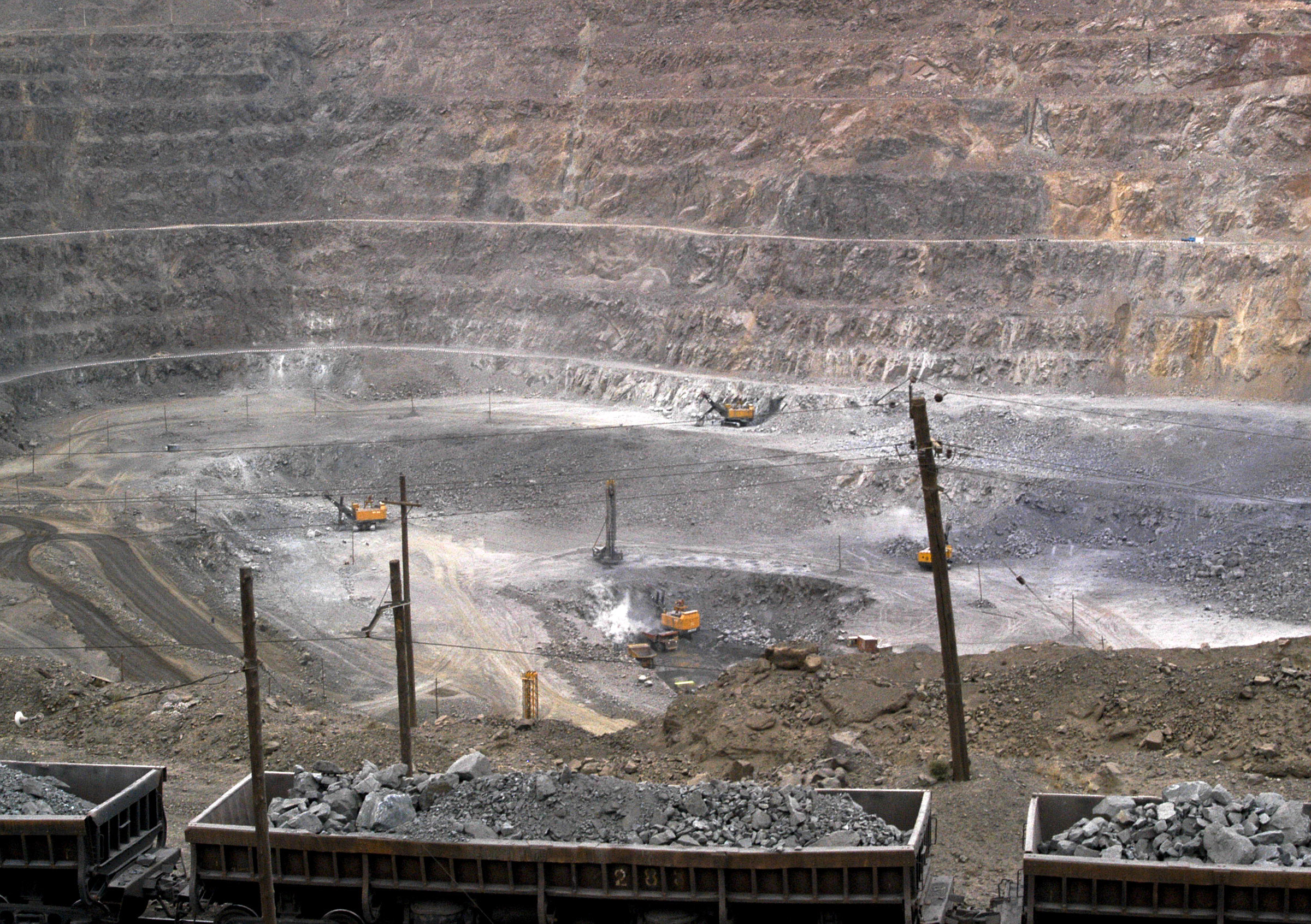 In this photo from 2010, workers use machinery to dig at a rare earth mine in Baiyunebo mining district of Baotou in north China’s Inner Mongolia Autonomous Region.  (AP Photo)

When China opened that supply valve, prices dropped to 2009 levels in a matter of months. They had made their point loud and clear: As former Chinese leader Deng Xiaoping said in 1992, “The Middle East has its oil, we have rare earth.”

What are rare earth metals?

“If you look at the periodic table and notice the two rows of 17 elements that stick out at the bottom like they don’t belong, those are the rare earths,” said Harris. Ten of those elements are essential to a range of modern products, whether it’s the compact, yet powerful magnets in naval radar systems or the coatings on fine lenses for telescopes, cameras, microscopes, and smartphone screens.

Despite their name, rare earth metals are not rare. They are scattered widely around the world. Their scarcity for human use is based on two factors: Their low saturation in the earth and the difficulty of separating the metal from the surrounding ore. That process can easily create an environmental disaster.

Open-pit strip mines scour the landscape, while extracting the metals from the ore requires highly toxic acids and temperatures of more than 2,000 degrees Fahrenheit. The process also releases radioactive waste into the water and air. The world’s largest rare earth operation, in Baotou, China, creates a toxic stew that is pumped into a man-made sludge lake adjacent to the mine in Inner Mongolia. Processing the ore into usable metals creates 2,000 tons of toxic waste for each ton of rare earth metals, according to The Guardian.

“You can reduce the environmental impact of processing rare earths, but you have to spend a lot more money,” said Harris, a regular visitor to the rare earth research facility in Baotou, China.

Although the United States no longer mines rare earth metals, it was once the world leader. That was due largely to the dominance of the Mountain Pass Mine on the edge of the Mojave Desert in southern California.

But the mine was closed in 1998 after a series of 60 toxic spills over the previous 14 years released 600,000 gallons of radioactive fluid into the desert. At the same time, China was on an all-out push to dominate the market.

“In the 1990s, the Chinese flooded the market with cheap rare earths and then, when they drove the competition out of business, they jacked up the prices and started buying up the competition,” said Harris. “This has been a slow, methodical process for the Chinese to create a rare earth monopoly.”

Top 10 countries that mine rare earths

There is another part to this story that goes beyond China’s aggressive trade practices, according to Laura Lewis, a University Distinguished Professor of Engineering who, like Harris, is working to develop alternatives to rare earth materials.

She explained that in addition to abundant natural resources and lax environmental regulations, China has invested heavily in mining and processing technology while benefiting from the world’s largest supply of cheap labor.

Ramamurti agrees, saying the key to China’s market dominance is the complete economic ecosystem it has built around rare earth metals.

“Reducing our dependence on China does not involve a single product or resource, so you can’t simply buy it somewhere else,” he said. “They monopolize the whole ecosystem of supply, production, and workers. To move elsewhere you would have to replicate that entire ecosystem.”

One potential effect of the escalating trade war with China is that Beijing could cut off America’s supply of rare earth metals, which are essential to the production of a vast range of products: smartphones, guided missiles, wind turbines, military radar, electric cars, computer hard drives, and much more.

Because China controls more than 80 percent of the world’s supply of these precious metals, it’s possible that a trade war could affect the production of many consumer, medical, and military products at the core of modern life.

Rare earth metals provide high-powered magnets used in computer hard drives, wind turbines, naval radar, MRI machines and more. Conventional magnets that don’t use rare earth metals have to be twice and big and twice as heavy to get the job done. This is an obvious liability whether you are trying to build a light and powerful motor for an electric car, or a tiny motor for a laptop.

Northeastern researchers are trying to reduce our dependence on China by inventing alternative supermagnets that do not require rare earth metals.

The United States lost is position as the world’s top producer of rare earth metals in early 1990s and stopped producing entirely in 1998, when the Mountain Pass Mine in California was closed for a string of 60 toxic spills. It reopened briefly in 2002, but was quickly driven under by Chinese competition and declared bankruptcy in 2015.

“I believe our approach to independence requires a diverse portfolio,”

Although efforts are underway to reopen the mine under new ownership, the ore would still have to be shipped to China for processing. China remains the only nation with the ability to separate large quantities of rare earth processing from the raw ore.

There is no single way to eliminate U.S. dependence on Chinese rare earths, said Laura Lewis, a University Distinguished Professor of Chemical Engineering at Northeastern.

“I believe our approach to independence requires a diverse portfolio,” she said. “Just like in financial investing, we need to reduce our risk by using several strategies to improve our resiliency to disruption in the rare earth supply chain.”

One solution is to stockpile rare earth metals in case of a second Chinese embargo. Another idea is to develop ways to recycle rare earth metals from products such as used smartphones and computers. The recycling option, however, is currently so expensive and inefficient that it is not yet a viable choice. 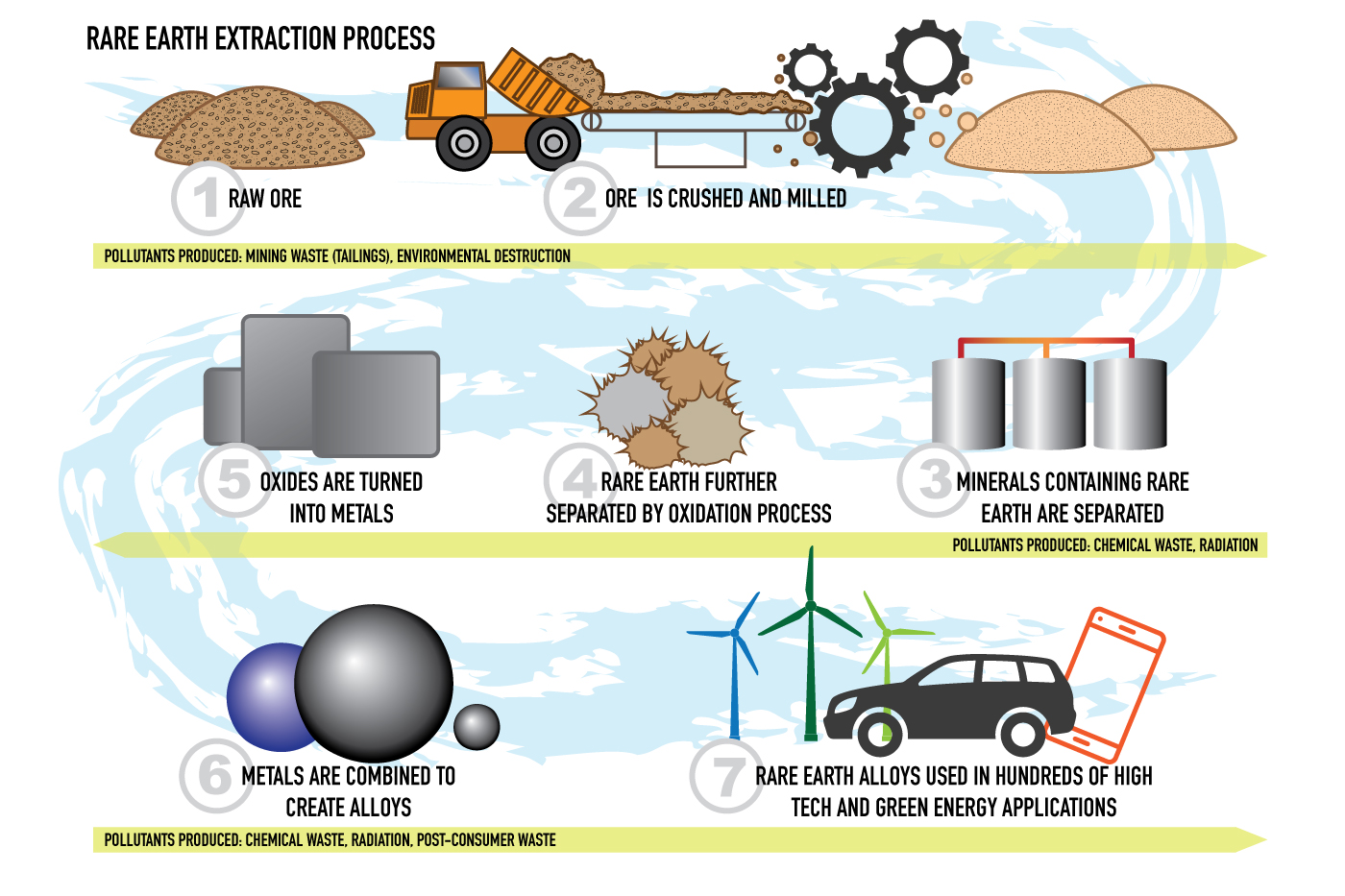 Source: Institute for the Analysis of Global Security. Infographic by Greg Grinnell

Lewis has focused her research on creating more powerful magnets by changing the crystal structure of common metals such as iron and nickel.

“We know this can be done because highly magnetized iron and nickel alloys already exists in meteors,” she said. “But we don’t have billions of years, so we are working on the nano-scale to speed up the process in the laboratory. We don’t have a magnet yet, but we have some promising results.”

Harris’ work on supermagnets has been funded by several large grants from the Department of Defense, and focuses primarily on military applications. He said the physics of magnetism is such that alternative magnets will never be more than 60 percent as powerful as their rare earth counterparts.

“So with these new magnets, you will have a secure supply chain, but the magnets will have to be twice as large to deliver the same performance,” said Harris, a University Distinguished Professor of Engineering at Northeastern who also has a joint faculty appointment at the University of Electronic Science and Technology of China.

He noted that the magnets in a 3.5 megawatt wind turbine require more than a ton of rare earth components, so redesigning turbines for non-rare earth magnets that are twice the size will be an expensive endeavor.

Harris said the Chinese have already announced their intention to dominate wind energy, based, in part, on their control of rare earth metals.

This is why Harris and others are working on the second half of the alternative magnet strategy—reengineering products so that they don’t require a magnet as strong.

In 2008, Harris founded Metamagnetics, which produces essential components for advanced radar and communication devices used on warships and military aircraft that do not rely on rare earth elements.

Harris said that Raytheon, Northrop Grumman, and Lockheed Martin are incorporating the company’s innovations into their defense, communication, and aeronautical products. With some modifications, Harris said the technology can be adapted elsewhere.

“The magnet technology for a Navy destroyer’s radar is quite similar to the technology in a cellphone base station or the GPS system on a satellite,” he said.

Harris emphasizes that reengineering a product can be expensive and that many private industries are not willing to make the investment.

“When we go to Tesla and say we can give them a reliable supply chain, but their motor will have to be twice as large, they won’t go for it,” he said. “They’ll take their chances with maintaining the Chinese supply chain, because with bigger magnets, the car is going to be heavier and the performance won’t be as great.”

From the perspective of Ravi Ramamurti, a University Distinguished Professor of International Business and Strategy at Northeastern, the difficulty of replacing the supply stream for rare earth metals is why the threat of a trade war is so troubling.

“In an interdependent world, a trade war can only work if you can hurt another nation without hurting yourself,” he said. “This is why trade wars aren’t supposed to happen. They create a case of mutual hostage taking.”