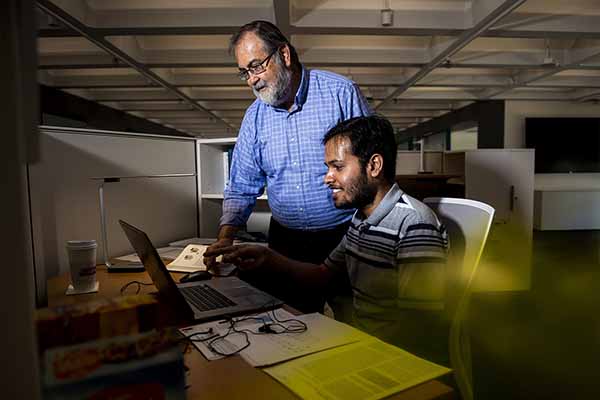 Herbert Levine can pinpoint a moment in the 1990s that solidified his shift from theoretical physics to biophysics research. Levine, University Distinguished Professor of Physics, jointly appointed in Bioengineering at Northeastern, says he was looking for problems in biology that resembled his physics research, which at the time examined waves in chemical systems. Finally, one of Levine’s students found a book that described similar phenomena in biology. The best part?

“The person who wrote the book had an office 100 meters away from mine,” Levine says. “I had never met him and had no idea what he did.”

Levine met with his colleague to learn more about the approaches and methodologies used to study biological systems. That initial meeting turned into a 15-year collaboration, Levine says.

“It was sort of engineered serendipity,” he says, noting that general knowledge of physics had by that time advanced to the point of being potentially applicable to other fields. “It was just a question of finding someone who could help you navigate an unfamiliar language. For the last 25 years or so, I’ve been doing that in a variety of contexts.”

“People think it’s insane when I tell them that,” he says. “But I’m happy to be here and happy to take part in what I think is a very exciting time for Northeastern.” In January 2019, Levine came to Northeastern from Rice University as the first faculty recruit for the Northeastern “Game Changers” initiative. He attended MIT as an undergraduate and says he was excited to reconnect with all that Boston has to offer – even the weather. 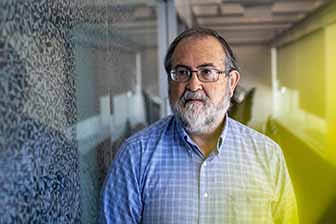 A member of the National Academy of Sciences,Levine says he initially used theoretical physics to study simple microorganisms like bacteria. Today, he is applying ideas from physics, mathematics, and computation to biomedicine—in particular, to cancer science.

Levine says his research examines how, on a fundamental level, cancer spreads, and why some treatments work well for certain patients but not others. His previous work focused on using computation to understand how a lung cell, for example, can change and metastasize, traveling to different parts of the body.

His latest research focuses on immunotherapy, a type of cancer treatment that uses a person’s immune system to fight cancer. While immunotherapies are very effective against certain cancers, the approach still does not work for many patients. Levine says researchers don’t fully understand why some immunotherapies and other treatments only work for a small percentage of people. And because cancer therapies can have serious side effects, Levine says it’s important to have a better idea of who is most likely to benefit from them.

“In the clinical world, when you come up with something that can help 20 percent of the patients with a very bad disease, that’s great,” Levine says. “But from a fundamental point of view, there’s a clear scientific mystery. Can one figure out how to predict in advance which people would respond?”

Levine is exploring these questions, which he says could eventually help researchers develop better ways to predict and prevent the progression of cancer. But, Levine says, the team is focused on addressing fundamental questions rather than direct clinical applications.

“There are advances that can be made without really looking at the fundamentals. Sometimes you can make progress purely empirically by doing different experiments and that’s great,” he says. “And then there are problems where you get stuck, and you just need some more fundamental understanding about how things work. That’s what we’re trying to do.”

One of the reasons Levine says he was excited about joining Northeastern is the opportunity to assemble a team to further this multidisciplinary work. Ultimately, he plans to form a new Center for the Physics Underlying Mammalian Biology and Complex Diseases, which will take advantage of  existing expertise from the faculty at Northeastern and new recruits.