Rebuilding in the Modern World

Puerto Rico is in the midst of a crisis. Hurricane Maria flattened the island, tearing up aging electrical infrastructure and stranding 3.5 million Americans without power for what could be months.

The hurricane—one of the most extreme to ever rock the Caribbean—has imperiled hospitals, dams, cell towers, private citizens, and more. But there’s a glimmer of hope, according to two Northeastern engineering professors. The devastation to Puerto Rico’s infrastructure, as complete as it was, offers an opportunity to entirely rethink and rebuild it to be more nimble and resilient. 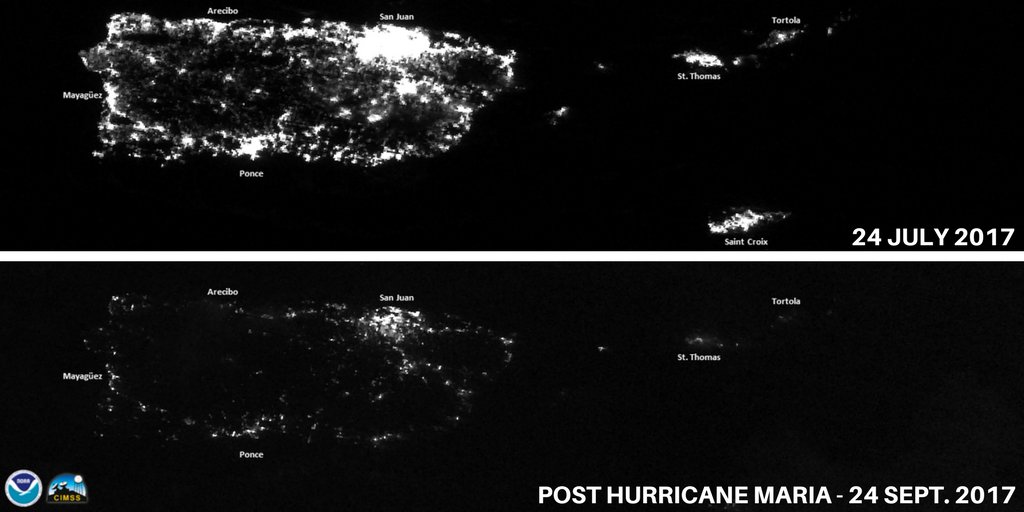 Satellite photos of Puerto Rico before Hurricane Maria (above) and after (below). Photo: NOAA

“This could be a test case for the U.S. to display its ingenuity, its prowess of technology, to show the world what a modern energy supply-and-demand system could look like,” said Matthias Ruth, professor of public policy and civil and environmental engineering and director of the School of Public Policy and Urban Affairs.  “This is an opportunity to do things right.”

Ozlem Ergun, professor of mechanical and industrial engineering and a member of the Global Resilience Institute, agreed. “This is a chance to think more about long-term structural changes,” she said. “Doing the same thing again just helps you rebuild until the next big storm.”

Of course, both professors acknowledge that the situation is complex. The intensity of the storm would have left pretty much any region in the U.S. in a similar situation as Puerto Rico is in, Ruth and Ergun said.

“After something terrible happens, everyone talks about preparedness, but there’s really nothing Puerto Rico could have done as it stood,” Ergen said. “If you have trees being uprooted, of course power lines are going to be uprooted.”

That is, as long as the power grid is above ground.

“In most of the developed world, this infrastructure is underground,” Ergun said. “You have millions of people out of power in part because the power grid is very vulnerable to weather events when it’s outside. When you have 150 mph winds blowing around and your grid is above ground, there’s really nothing you can do.”

Another (though not mutually exclusive) option is to decentralize major networks like the electricity system, Ruth said.

In Puerto Rico’s case, that centralization applied both to the infrastructure and ownership of the electricity.

Through a knotty, complex process, Puerto Rico’s electric utility—known by its initials, PREPA—had been providing free electricity to the island’s 78 municipal buildings and had a stronghold on the power supply for the rest of its residents as well. With the company more than $9 billion in debt, PREPA’s electrical plants were decades old, inefficient, and prone to failure at the slightest storm.

Puerto Rico’s power grid might have been especially vulnerable to disaster, but the rest of the U.S. is not immune.

“We’re all locked into this centralized infrastructure,” Ruth said. “We need to think about harnessing solar power, wind power, et cetera, and moving very aggressively into 21st-century technology to provide electricity and power.”

Part of that 21st-century technology plan involves shortening the distance power must travel from point of origin to point of use and building in backups.

“If you have many small nodes of power generation, with lots of different suppliers, and some redundancy in the system—using solar and wind power, for example—you can buffer some of these impacts much more easily,” Ruth said.

A bigger innovation, though, might be in rethinking what that electricity is powering.

Designing net-zero energy houses, or utilizing biological water purification systems, for example, are ways to rely less on any sort of power grid.

“If we have net-zero houses, then so what if the power grid goes down?” he asked.

Cost, however, is a consideration behind every decision for Puerto Rico. Earlier this year, struggling under the weight of its $123 billion debt, the island declared bankruptcy. Effective management of federal disaster relief aid will be critical to developing long-term infrastructure solutions, Ergun said.

Either way, though, the island has to rebuild its power grid and other essential infrastructure.

“Puerto Rico will get rebuilt,” Ruth said. “And we can either recreate what we had there before, which more often than not works just OK. Or, we can build it in a way that we know is more resilient to a wide range of different impacts.”