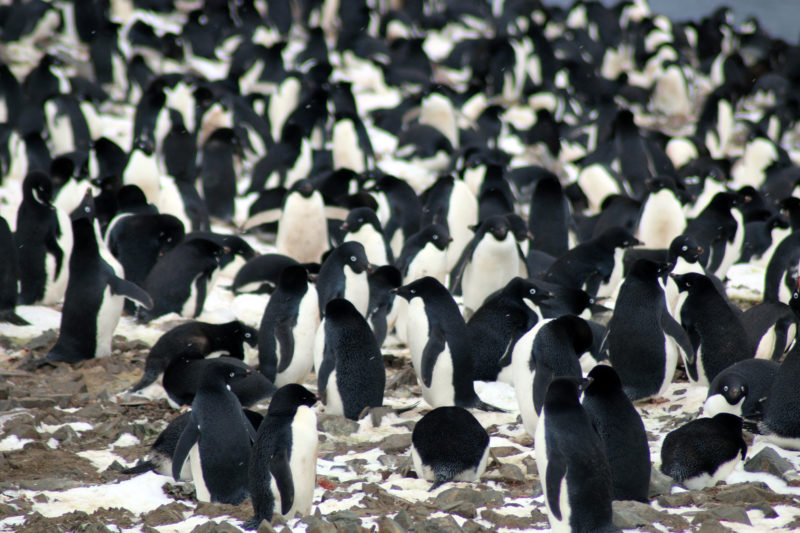 Using an autonomous aerial drone system developed by ECE/MIE Professor Hanumant Singh, researchers from the Woods Hole Oceanographic Institution have discovered a colony of more than 1,500,000 Adélie Penguins on the Danger Islands—more than the rest of the entire Antarctic Peninsula region combined.

Using an autonomous aerial drone system developed by Northeastern researcher Hanumant Singh, researchers have discovered a colony of more than 1,500,000 Adélie Penguins on the remote Danger Islands—more than the rest of the entire Antarctic Peninsula region combined.

In a paper released Friday in the journal Scientific Reports, scientists announced the discovery of this previously unknown supercolony. Earlier reports using satellite data suggested the colonies may exist, but heavy ice pack is common around these islands—even in summer months—making it difficult to access the area to conduct a comprehensive survey. That’s where the drone system comes in.

“It’s unbelievable. We knew the colony existed, but we didn’t know how big it was,” said Hanumant Singh, professor of electrical and computer engineering, who developed the drone’s imaging and navigation system. The drone flew about 30 meters over the surface of the islands—close enough for a machine-learning algorithm he developed to rapidly count each individual penguin.

The drone flew in a “mowing the lawn” pattern, Singh said, creating images the researchers compiled into a detailed mosaic map of the island. “As soon as we did the first run, it became very obvious that counting penguins this way was more efficient than anything else we’ve ever thought of,” Singh said.

The supercolony—which is comprised of 751,527 penguin pairs—includes the third and fourth largest Adélie penguin colonies in the world. Researchers believe the Danger Islands will be an important breeding location for penguins under projected climate change, and that they deserve special consideration in the negotiation and design of Marine Protected Areas in the region.

The number of penguins in the Danger Islands could provide insight not just on penguin population dynamics, but also on the effects of changing temperature and sea ice on the region’s ecology, according to the Woods Hole Oceanographic Institution, which collaborated on the study with researchers from Northeastern, Stony Brook University, Oxford University, Louisiana State University, and Southampton University.