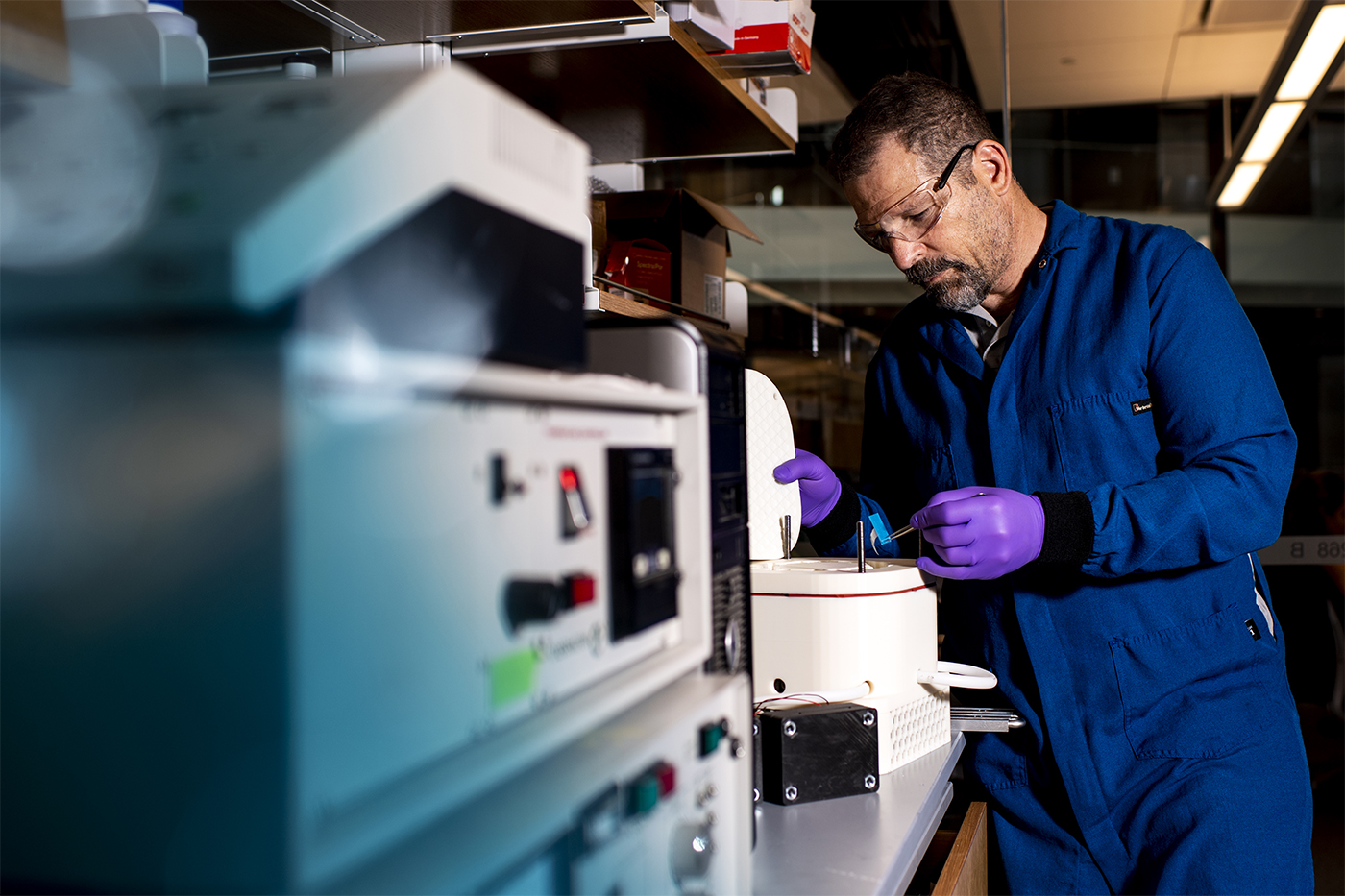 BioE Professor Jeff Ruberti is developing a method to use collagen to help speed up the recovery after a tendon is injured.

Tendon injuries can happen in an instant. With a loud pop and a sharp pain, even the most casual athlete’s lifestyle can be altered permanently. Jeff Ruberti, professor of bioengineering at Northeastern, learned this unfortunate lesson firsthand: While playing pickup soccer at a conference in 2017, he planted his foot to change directions, and instantly snapped his Achilles tendon.

“You can’t do much for a while,” Ruberti recalls. “I started going through the 100 greatest movies of all time, with my foot up and toe pointed down, waiting for it to heal. It was almost two months before I was out of a plastic boot, and it’s still not totally right today.”

At the moment, he says, there are only a few options available for tendon repair, and they don’t always give patients 100 percent of their former mobility. Surgeons typically either let the tendons heal on their own or suture the loose ends of the tear back together. Both treatments require intense physical therapy before a patient can even begin to bounce back.

Ruberti may have found a better way. He studies collagen, the connective tissue that holds together most of our body, and thinks that manipulating it can lead to faster recover times for tendon injury.

“Collagen is the structural molecule in vertebrate animals. In every tissue, it takes different forms, from tendons to corneas. It’s made up of tiny little strands of molecules which assemble into bigger and bigger strands that hold our cells in place.”

Those molecules have special properties. Put them together in a petri dish, and they won’t form much of anything—but Ruberti found that if you start pulling on them, they’ll start to snap into place with one another, and form recognizable, string-like structures.

“That was a fundamental discovery,” he says. “Our research showed that collagen assembles itself into natural load-bearing structures when stretched. That means it’s more stable when you pull on it than when you don’t.”

If it were possible to put collagen molecules into a wound site and apply the right load to them, he reasoned, it might allow damaged tendons to heal more quickly than existing methods.

Doing that isn’t exactly easy, though. Injecting loose collagen into a tendon won’t do much, since most of it will float away from the wound before it can self-assemble. To really be successful, the molecules have to stay directly on the damaged tissue while the surrounding muscle flexes and pulls the site, causing the collagen molecules to link together.

To accomplish this feat, Ruberti’s lab manipulated collagen into two different forms. The first is a gel-like material called “metastable” collagen, which can supply loose collagen molecules to a wounded tendon. The other is a stable, dense mat of collagen that can wrap around the tendon, holding the gel in place.

“Think of a fractured Achilles tendon as a broken rope,” he says. “The stable collagen acts like a piece of tape wrapped around the broken spot, holding the ends together. But inside the tape, we put a highly dense gel of collagen molecules that can help facilitate tendon repair. If we stimulate the calf muscle to contract a little, the tendon may start to incorporate those molecules.”

In the process, the collagen may assemble long strands where tenocytes, the cells that create living tendons, can then settle down and grow. “It’s a totally different way of thinking about tendon repair.” he adds.

Ruberti has already started thinking about bringing this technique to market. He’s started a small company with Patrick Bradley, his former doctoral student at Northeastern, and Adam Hacking, a former orthopedics researcher, which he hopes will eventually turn his lab’s work into a viable treatment. He’s already tested elements of the technique in the lab, and is moving on to animal testing. If successful, he thinks this new collagen technology could be invaluable to professional athletes and elite soldiers, people who rely on keeping their bodies in peak form in order to do their jobs.

“Professional football teams pay millions to train their top players. Same thing for a Navy seal or an Army Ranger—training them costs millions of dollars. But people in both jobs can get injuries from training that take them out of commission entirely,” he says.

Using this new method, it may be possible to not only repair their damaged tendons more quickly, but let them return to high-impact jobs with less fear of repeated injury. That could improve the lives of not only elite athletes, but also hobbled professors, Ruberti adds. With any luck, he’ll be able to spare others from eight weeks of sitting on the couch.