Professor Ratilal-Makris has extensive experimental and theoretical experience in remote sensing with acoustics and ultrasonics. The applications include long range acoustic detection, localization, and inference of underwater vehicles, geology, fish, and other objects in the ocean; linear and nonlinear ultrasound imaging for biomedical and military applications; and imaging in multipath environments.

Professor Ratilal-Makris holds a PhD in acoustics from the Massachusetts Institute of Technology (MIT, 2002). She was was previously a Postdoctoral Associate in the Department of Ocean Engineering at MIT (2002-2004) and a Research Scientist at Singapore’s DSO National Laboratories (1994-1998). She was awarded the ONR Postdoctoral Award in Ocean Acoustics in 2002, the Bruce Lindsay Award by the Acoustical Society of America in 2006, the ONR Young Investigator (YIP) Award in 2007, and the Presidential Early Career Award for Scientists and Engineers (PECASE) in 2008. 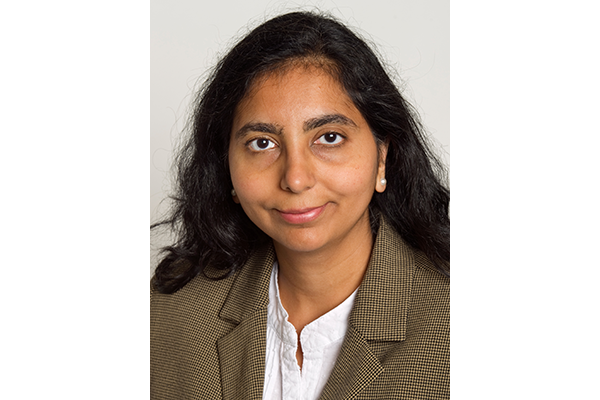 ECE Interim Chair Miriam Leeser, Associate Chair Waleed Meleis, and Associate Professor Purnima Ratilal-Makris met with undergraduate students in the ECE Student Advisory Board to discuss their experiences in the department. The Student Advisory Board is planning on meeting with the department regularly throughout the year. We look forward to continuing the conversation.

ECE Associate Professor Purnima Ratilal whose research was recently featured in Nature, has shown that whales tend to group into their own species when eating in large feeding areas.

Purnima Ratilal-Makris was elected a fellow of the Acoustical Society of America (ASA).

ECE associate professor Purnima Ratilal-Makris was selected as a Fellow of the Acoustical Society of America for her work in acoustics and ultrasonics.

ECE associate professor Purnima Ratilal, has received a $150K NSF grant to develop a system to detect the movements of marine animals in near-real-time to minimize the impact of man-made activities on their populations