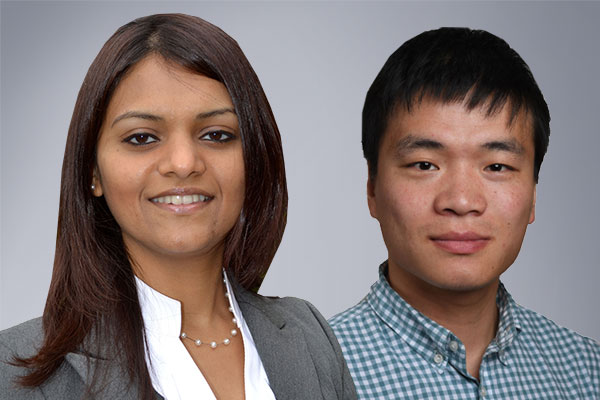 Cartilage repair remains a challenge due to its avascular and negatively charged matrix that limits its regenerative ability and hinders drug transport, which already suffer from short joint residence time. Mesenchymal stem cell derived exosomes are emerging as promising cartilage repair therapy due to their intrinsic regenerative potential, but they suffer from lack of cartilage targeting. This project will make them positively charged and anchor an anti- catabolic drug such that they can penetrate the negatively charged cartilage, use it as a drug depot and deliver drugs to their cell targets while exhibiting their natural pro-chondrogenic therapeutic potential.

Ambika Bajpayee is an assistant professor of bioengineering at Northeastern. Photo by Ruby Wallau/Northeastern University

More than 30 million adults in the United States suffer from debilitating pain, stiffness, and swelling in their joints caused by osteoarthritis, which results from the breakdown of cartilage, the connective and cushioning tissue between our bones.

There are medications that can treat the symptoms, prevent cartilage from breaking down and, in some cases, even restore function to the joints.

But getting these drugs into the cartilage has been a challenge.

Northeastern researcher Ambika Bajpayee believes she has the solution: bio-electricity.

There exist disease-modifying osteoarthritis drugs that can have massive implications, she says, but they cannot reach their intra-joint cell targets effectively. Many people develop arthritis as they age, but it can also be caused by traumatic physical injury or repeated bending, heavy lifting, and high-impact exercise.

If people are given disease-modifying osteoarthritis drugs immediately after suffering a traumatic injury, it could keep them from developing osteoarthritis, Bajpayee says. Among the people who would benefit are young, fit athletes and military members who have torn cartilage, dislocated joints, and injured ligaments on the playing field or in war zones.

“These patients have a 50 to 80 percent chance of developing osteoarthritis,” says Bajpayee, who has received funding from the Department of Defense, the National Institutes of Health, and pharmaceutical companies to develop new methods to treat and diagnose osteoarthritis. “This is generally a young and active patient population. You cannot do a joint replacement on them. They’re too young; they have a long life ahead of them. This is the best option.”

For these drugs to get into the cartilage, they have to get past negatively charged macro-structures called aggrecans, which bristle outward like palm fronds or bottle brushes. The deeper you get into the layers of cartilage, the more densely clustered the aggrecans get.

The more tightly packed the aggrecans, the more difficult it is for a drug molecule to reach cartilage, says Bajpayee. So she’s turning what used to be a barrier to drug delivery into a boon with a simple theory: Opposites attract.

Aggrecans have a negative charge, which prevents them from touching one another, much like magnets that repel one another. By bonding the disease-modifying osteoarthritis drugs to positive polypeptides or proteins, Bajpayee uses that opposites-attract theory to draw them into the folds of negatively charged aggrecans.

Enabling the particles to attract the aggrecans is one thing. Getting them to move, and making them go in the right direction, is another. The trick is to find the right level of charge for the right size of molecule, so that the binding is more like a refrigerator magnet than a super magnet: reversible.

“A positively charged drug finds a negatively charged GAG and binds with it,” says Bajpayee, referring to glycosaminoglycan, which is part of the structure of the aggrecan. “But it’s weak enough so that the binding is reversible, and it can unbind and it can diffuse, or move further down. Find another binding site, bind, unbind, and then move forward.”

Some of the latest findings from her lab have been published in Acta Biomaterialia and Nature Rheumatology.

Like the teeth of a zip-tie, or the grooves of a porcupine quill, this weak, reversible binding allows electrically charged drugs to penetrate and travel through the tissue. “It’s a paradigm shift in how drug delivery is thought about,” says Bajpayee.

Bajpayee recently received  the NIH trailblazer award from the National Institute of Biomedical Imaging and Bioengineering to use her charge-based delivery platform to transport cell-derived extra-cellular vesicles into negatively charged cartilage for applications in drug delivery.