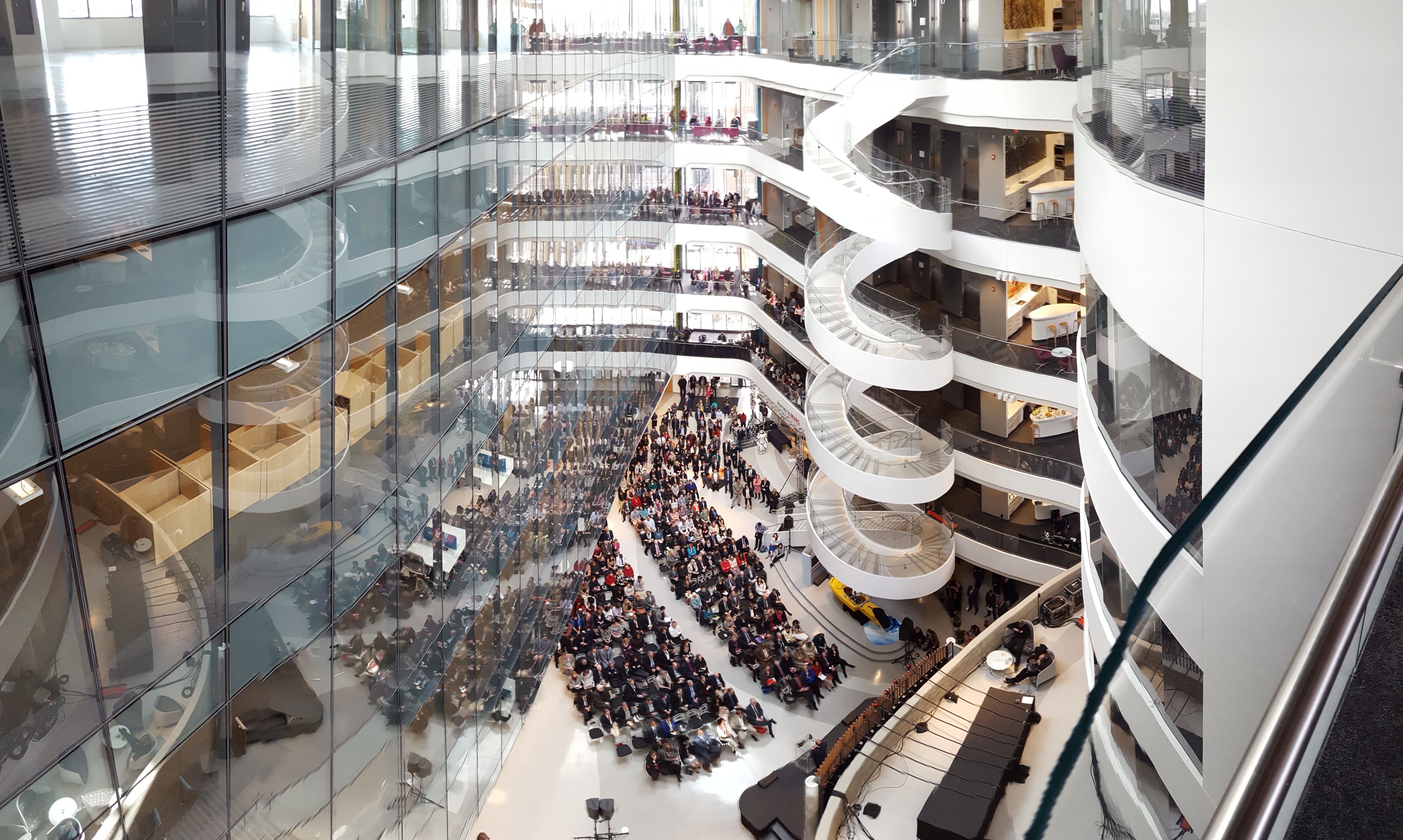 On Monday, Northeastern officially opened the Interdisciplinary Science and Engineering Complex, a facility that U.S. Sen. Elizabeth Warren called “a true temple of science” and that President Joseph E. Aoun declared “a piece of art” that will allow researchers, students, staff, and the community “to be at their best.” Video by Benjamin Bertsch and Adam Fischer/Northeastern University 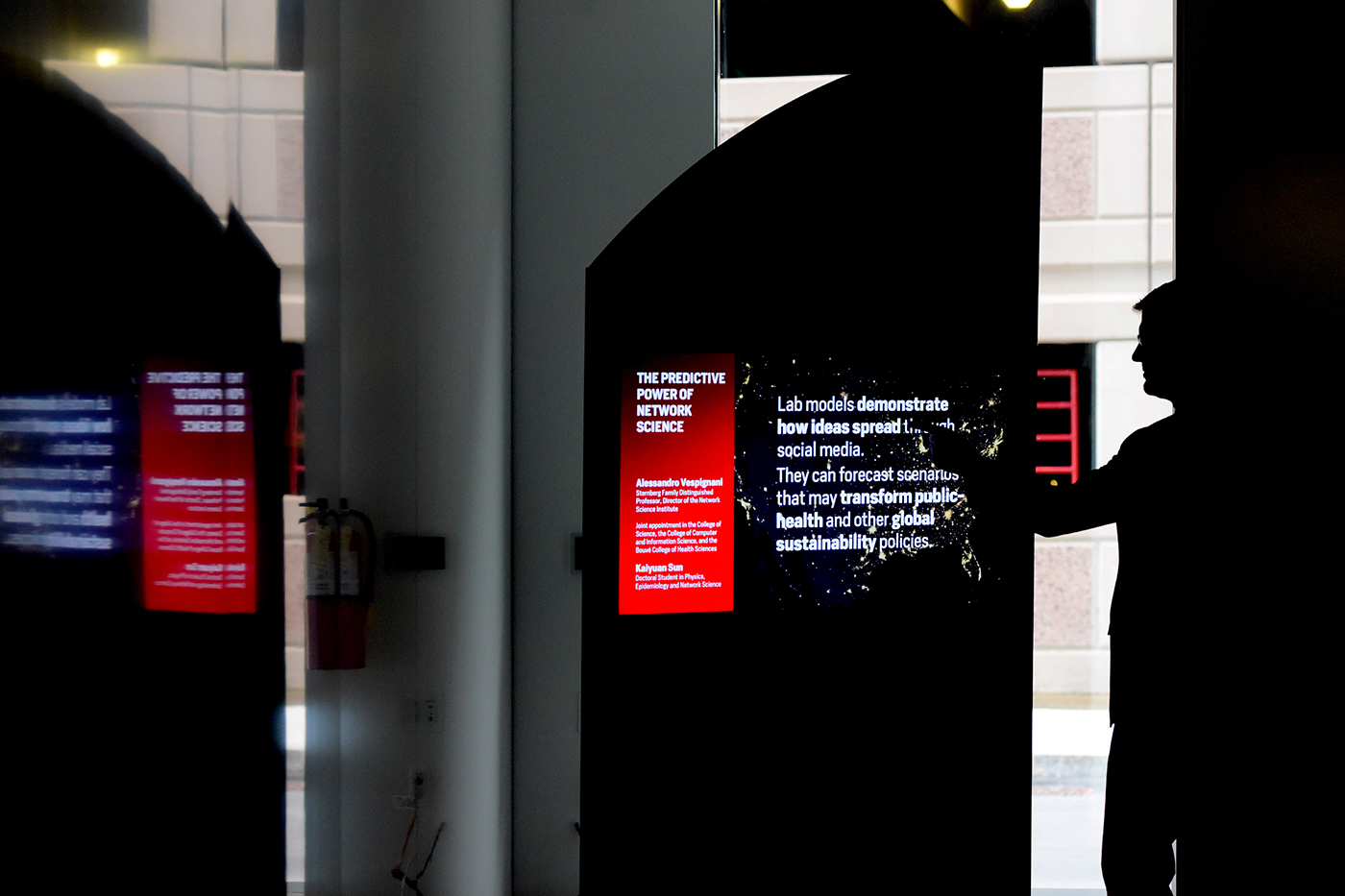 Colorful images of research projects ranging from “Breakthroughs in Airport Security” to “Making Coastal Ecosystes Resilient” fill a large room off the Atrium of the Interdisciplinary Science and Engineering Complex. Attendees at the ISEC opening interact with Northeastern researchers who explain their groundbreaking findings. Kim Lewis, University Distinguished Professor and director of the Antimicrobial Discovery Center, stands alongside a video demonstration of his work on “Eradicating Antibiotic-Resistant Disease.”

“One of the biggest problems facing humanity is antibiotic resistance,” says Lewis, who, with Distinguished Professor of Biology Slava Epstein, discovered a new antibiotic, called teixobactin, that kills pathogens without encountering any detectable resistance. What did the researchers do? They found a way to tap into the 99 percent of soil-based microorganisms, like teixobactin, that won’t grow in the lab. “Mother Earth has more compounds like teixobactin. We now have a platform to uncover them.” Lee Makowski, professor and chair of the Department of Bioengineering, describes how his research provides new insights into the genesis and progression of Alzheimer’s disease. “With collaborators at Massachusetts General Hospital, experts in signal and image processing, and data from the Department of Energy research centers, we are getting closer to understanding the triggers and mechanisms driving the disease,” he says. Once you understand the molecular basis for the progression of the disease, he adds, “you can start asking the right questions about how to prevent it.” 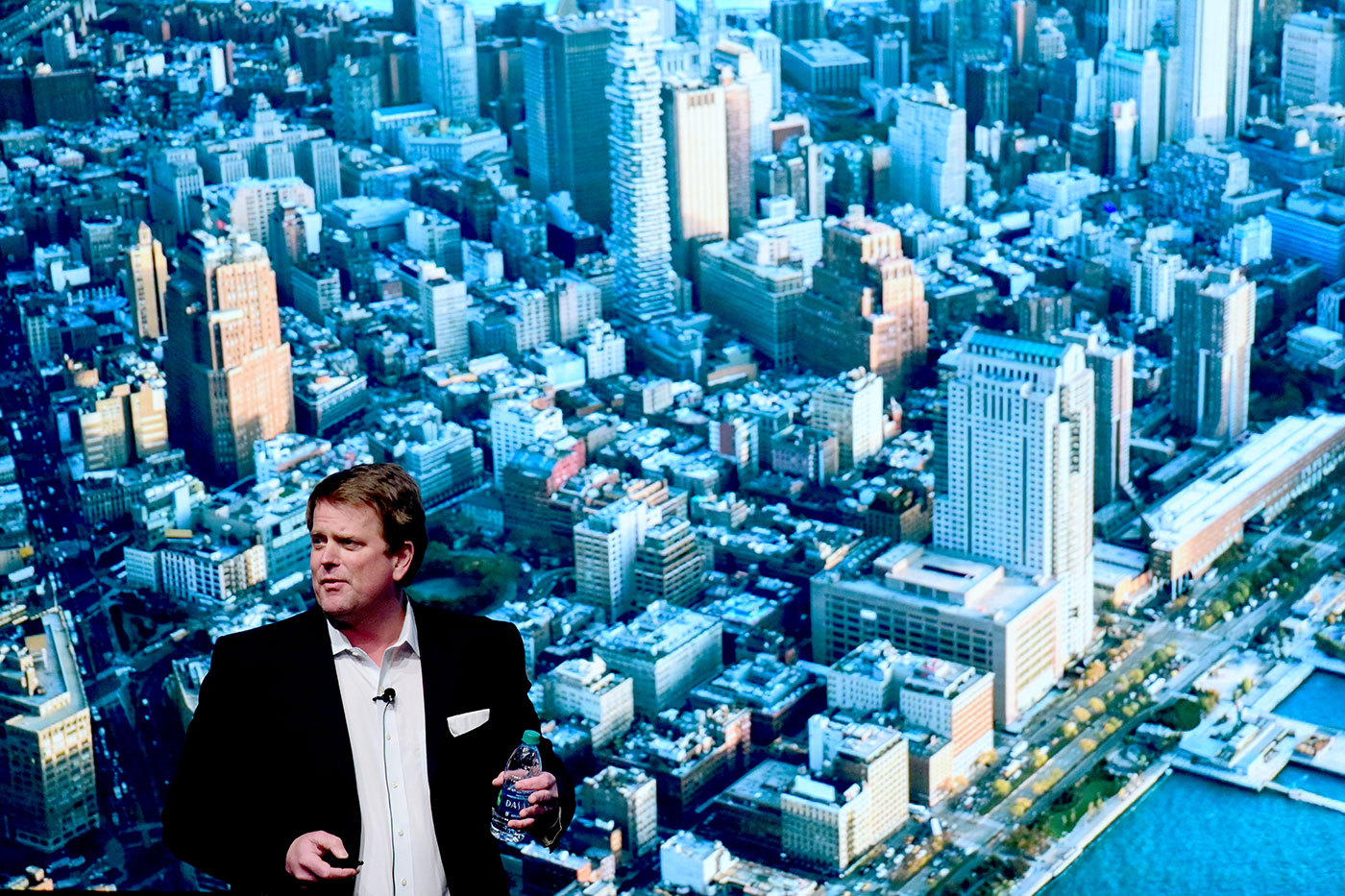 Trussell, also a professor and chair of the Department of Marine and Environmental Sciences, explains the importance of protecting global coastlines, the region represented by “a collision between humanity and the environment.”

He outlines three major threats to coastal regions—storm surges, global fisheries, and climate change. Of the latter, Trussell says that, regardless of one’s stance on the causes and effects of climate change, “What matters is that the sea level is rising. So, forget about mitigation; we need to adapt. Unless we do this, it is going to be a major issue.”

These threats have solutions, though, many of which interdisciplinary groups of Northeastern students and faculty are already working on.

Establishing partnerships, inventing and investing in new environmental technologies, innovating in aquaculture, and restoring wetlands are all crucial steps toward protecting our coastlines and sustaining them in the future, says Trussell.

The environment isn’t the only sensitive field; global systems such as energy grids, internet systems, and transportation networks also need to be safeguarded and made more sustainable, says Flynn.

“The networks we’ve built in the 20th century were built for efficiency, not for resiliency or security,” Flynn says. “If we have a shock to our system, how will it recover?”

Answering that question and discovering interdisciplinary ways to protect global networks is part of the mission of the Global Resilience Institute.

“We need to design systems not just to withstand a shock but to fail gracefully and recover nimbly,” Flynn says. 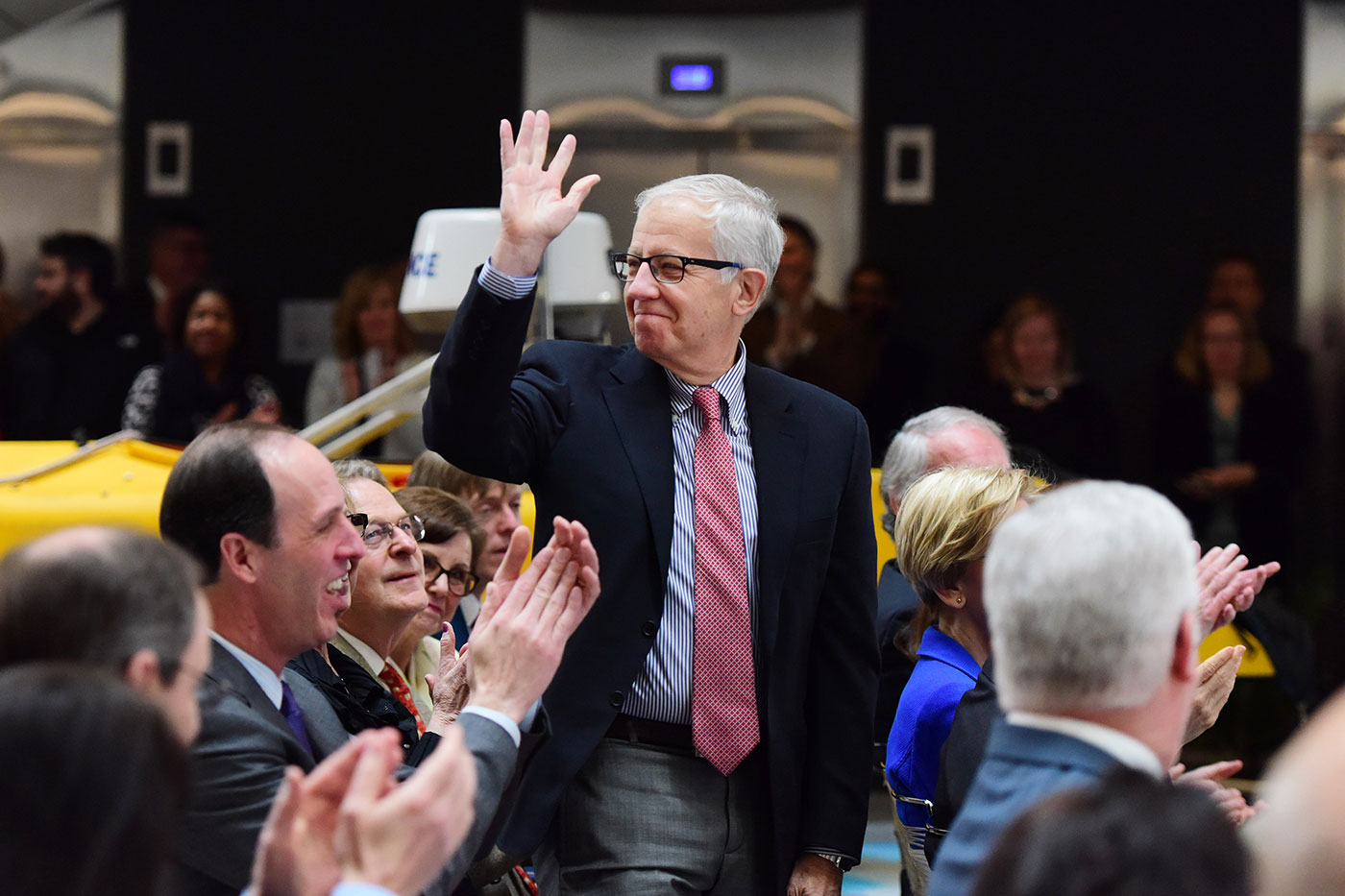 For Provost Emeritus Stephen Director, Monday’s official opening of the Interdisciplinary Science and Engineering Complex is the culmination of nearly a decade of planning.

“There was a big vision—and this was a piece of that vision—to help Northeastern become a world class research institution, with a focus on use-inspired research,” Director says.

And his vision for the building itself reflects that focus. Director says that ISEC was designed to facilitate a collaborative approach to taking on grand challenges.

“We wanted to encourage those sorts of serendipitous meetings, and a space where researchers could show off the work they’re doing,” Director says, pointing to the building’s adaptive open space and walls of windows. While the building has remained true to its original design so many years ago, Director says seeing it come alive is remarkable.

Another piece of his vision was the spiral staircase that anchors the main space—a staircase President Joseph E. Aoun called “Steve’s spiral” in his opening remarks earlier in the day.

Director laughs recalling that and explains, “All of what you gain in visibility throughout the building is lost if you have to go up and down in a closed-off elevator. This staircase makes it easy for people to communicate with each other between floors.”

The goals behind the design are already coming to fruition, Director says. “You see all the new institutes opening up and finding space in this building. And four to five years down the road, you’ll only see more of that in here.”

‘We will not cure cancer without you’

James Bradner, president of Novartis Institutes of BioMedical Research, says that the Cambridge, Massachusetts-based pharmaceutical company has a lot in common with Northeastern.

He points in particular to the two institutions’ focus on cross-disciplinary collaboration, particularly as it relates to the university’s new Interdisciplinary Science and Engineering Complex.

“There’s no question we are similar,” Bradner explains during a panel discussion on the future of interdisciplinary research. “At Novartis, there’s no chemistry building, no biology building. In your extraordinary facility, there are robots in the lobby, biology on floor four, cybersecurity on floor six. This is what the future of training environments will look like.” 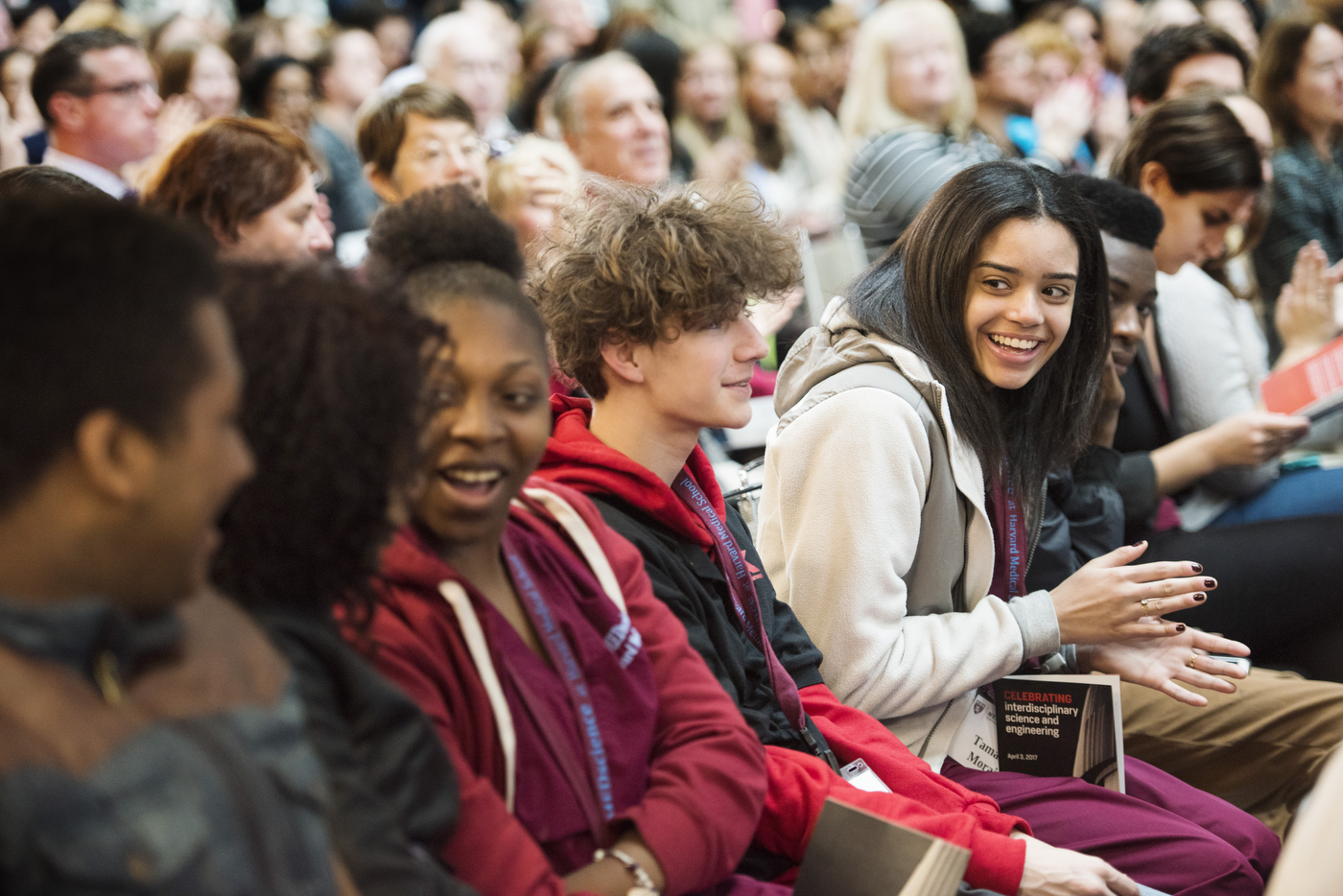 Our photographers capture all the emotion from the official ISEC opening. 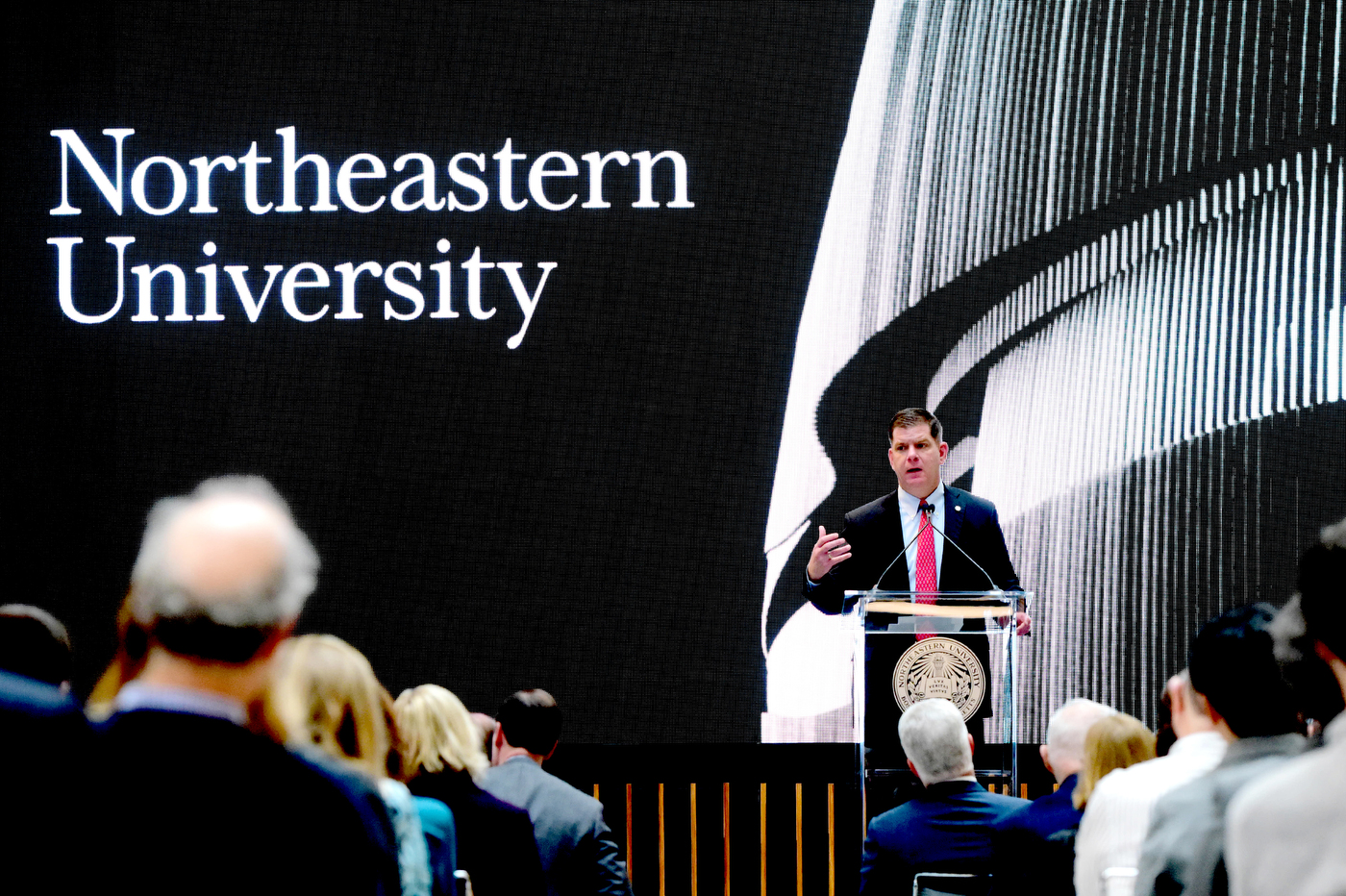 ‘This is not a trivial healthcare problem’ 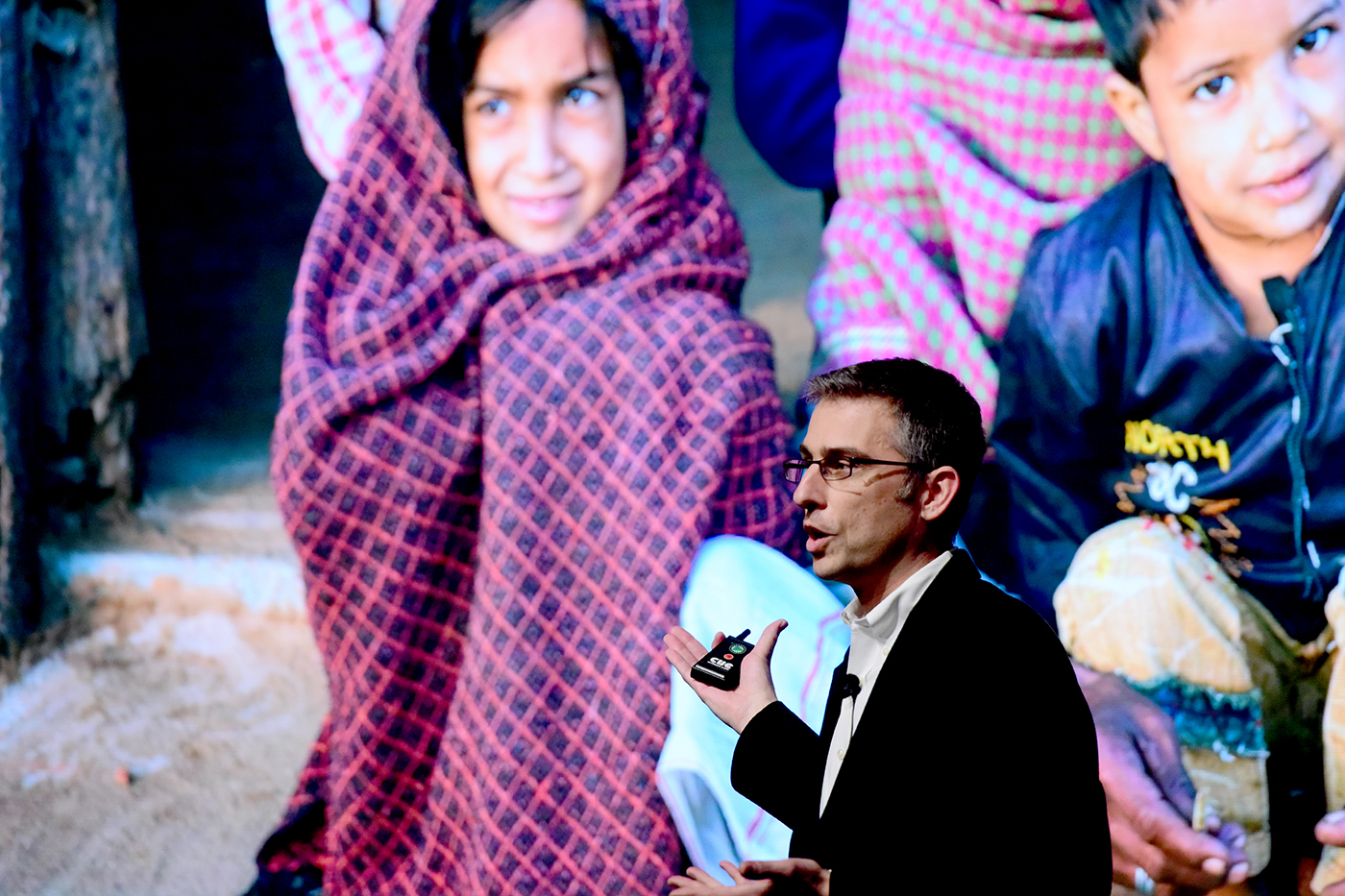 Neglected tropical diseases—a group of parasitic and bacterial diseases that impair physical and cognitive development—represent one of the global health community’s biggest problems. Indeed, NTDs afflict more than 1 billion people worldwide, the vast majority of whom live in society’s poorest, most marginalized communities.

“This is not a trivial healthcare problem,” says associate professor Michael Pollastri during a TED-style talk on Monday.

Pollastri is one of the world’s leading experts on NTDs, including malaria and sleeping sickness. As director of Northeastern’s Laboratory for Neglected Disease Drug Discovery, he oversees an interdisciplinary team of researchers and industry collaborators who work to repurpose existing drugs to fight these deadly maladies.

“The best way to discover a new drug is to start with an old one,” he explains. “What we do is take a drug that is FDA approved, test it against parasites, and then reengineer it to be more active against parasites without killing human cells.”

As he puts it, “We are committed to finding the next generation of drugs for those suffering from infections diseases, particularly for the very poor.”

NSF director: Northeastern ‘is well ahead of the curve’ 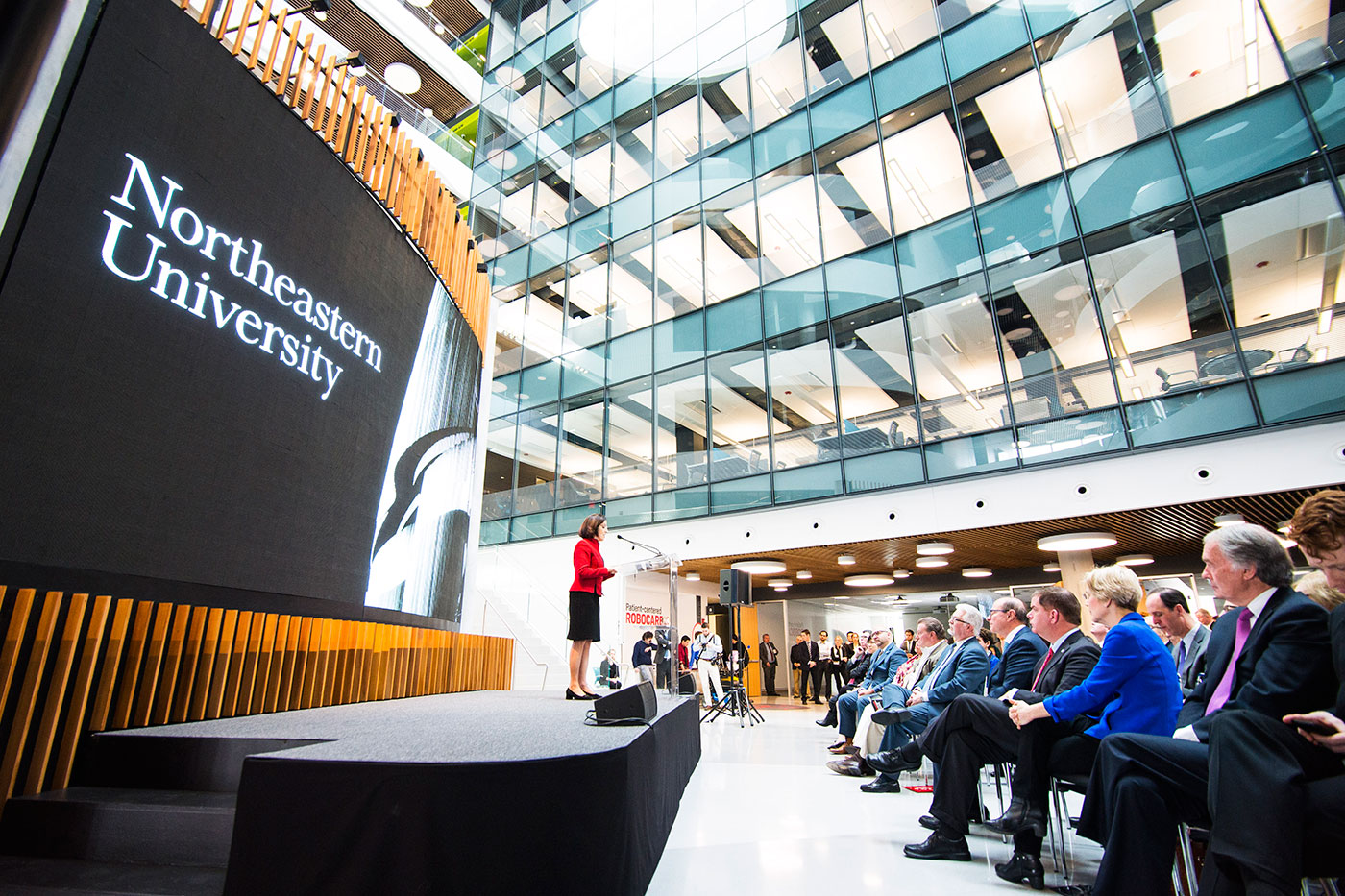 In her keynote address at Monday’s grand opening of the Interdisciplinary Science and Engineering Complex, National Science Foundation Director France A. Córdova describes the facility as “a hub of scholarship and teaching that will significantly advance Northeastern’s mission as a use-inspired research university,” and welcomes it to the “nation’s growing ecosystem of innovation incubators.”

She would know. As shepherd of a $7.5 billion federal agency that supports research, technological innovation, and education across the science, technology, engineering, and mathematics fields, Córdova is at the fore of scientific research across the U.S.

A key tenant of the NSF’s work—past, present, and future—is “convergence,” Córdova says, a process and hallmark she defines as merging “strengths to create something unique, something more resilient.”

Further, characteristics of convergence that Córdova urges NSF researchers to keep center to their work are “integration across disciplines” and “research driven by compelling problems,” she says.

“They’re descriptors that reflect the concept behind this complex,” she says, standing in the airy, light-filled atrium of ISEC, “and in that sense, Northeastern University is well ahead of the curve.”

She adds: “Like Northeastern, the NSF sees great merit in breaking down barriers between disciplines. This morning I was looking at all the glass, all the windows in this facility and I thought, ‘this is the true definition of transparency.'”

Córdova closes her remarks by emphasizing the importance of continued, sustained federal funding for science and research broadly.

“More than ever, the future of our society depends on sustained investments in science and technology,” she says. “It’s time to nurture a mutually supportive environment that will empower researchers everywhere.”

‘We are going to offer opportunities’ 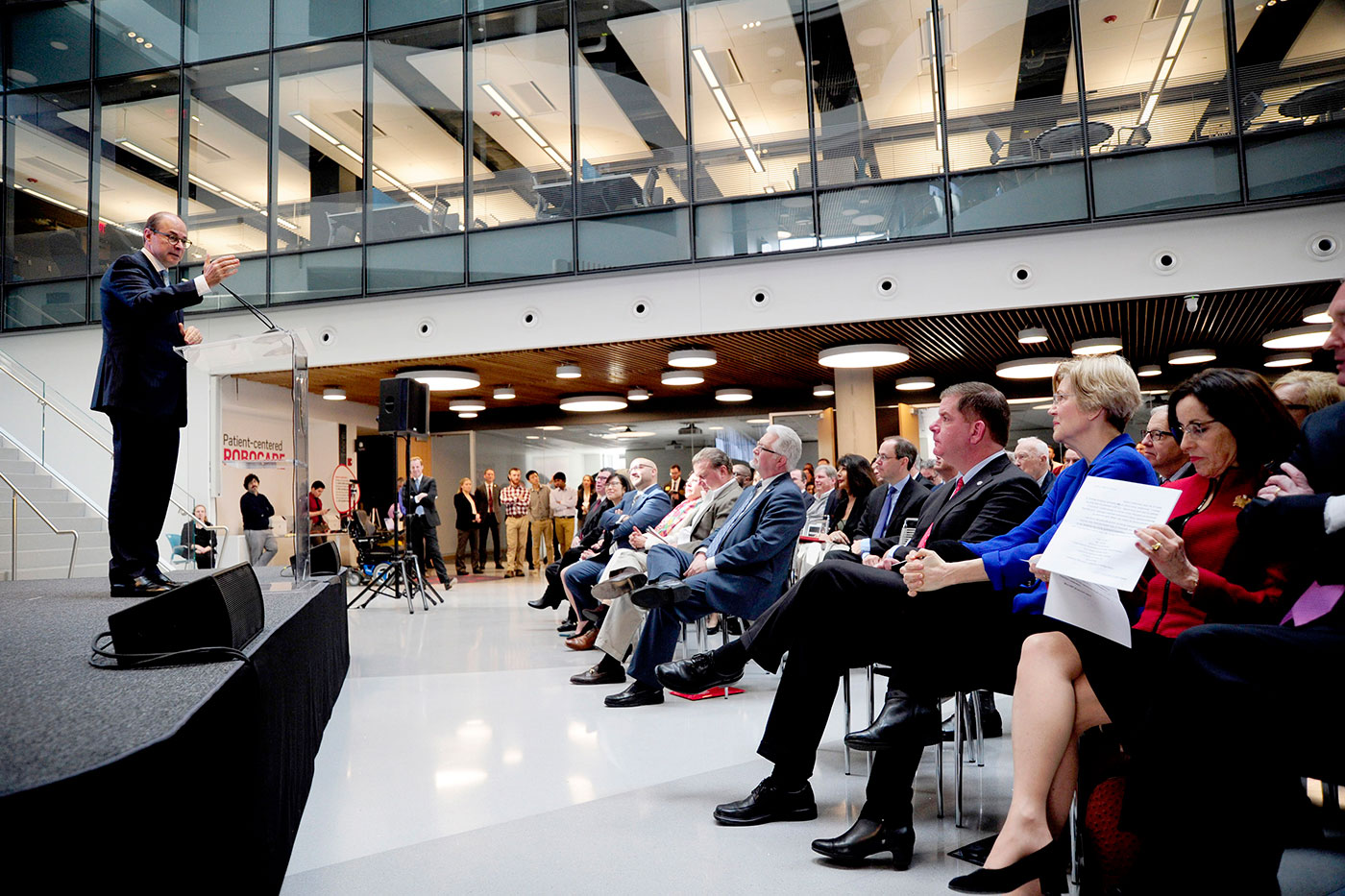 President Joseph Aoun says that Northeastern designed the Interdisciplinary Science and Engineering Complex to draw some of the world’s best and brightest students and faculty.

“We compete with the rest of the world,” he says at ISEC’s grand opening. “We are here today to reaffirm that this community, this city, this commonwealth, and this nation are going to offer opportunities.”

Monday’s ceremony marked the culmination of years of work from all corners of the university community, he says, from students, faculty, and staff to administrators and trustees. “It’s the vision of scores and scores of people,” he explains.

He notes that it was important for ISEC to be located in Boston’s Roxbury neighborhood. “We wanted this building to be open to the Roxbury community and to future students who are going to be in our labs,” he says, pointing out the group of students from the Edward M. Kennedy Academy for Health Careers who are in attendance. “Some of you told me you want to be here as students one day,” he tells them. “One day you’ll be here as faculty too.”

‘A true temple of science’ 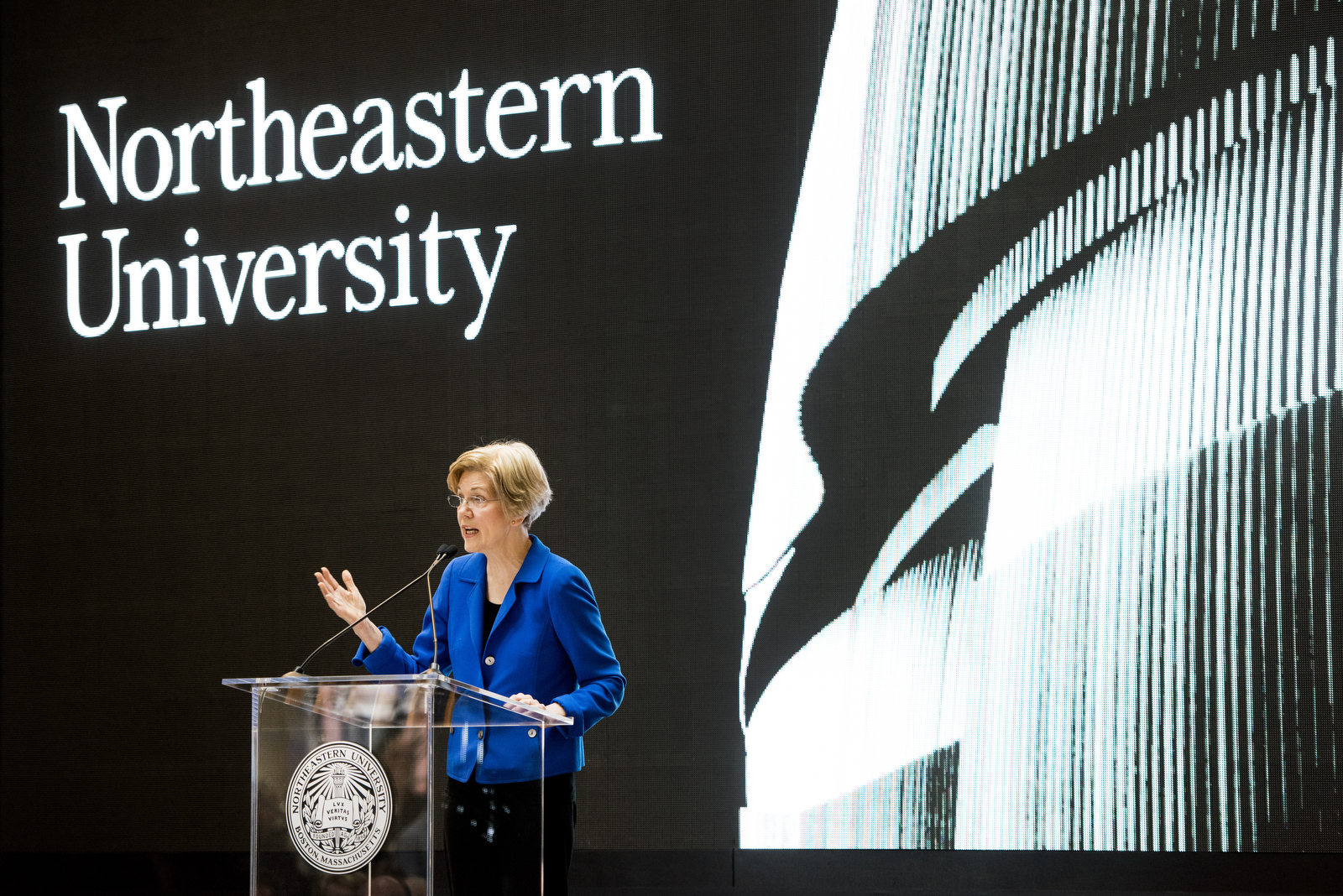 U.S. Sen. Elizabeth A. Warren of Massachusetts does not mince words regarding her support for research in her remarks to a packed house at the opening of Northeastern’s Interdisciplinary Science and Engineering Complex. “I believe in science,” she says to overwhelming applause, “strong independent science that asks the hard questions and goes wherever the data leads.”

ISEC will help fuel that power, she concludes. “This place will be a true temple of science.”

In earlier remarks, U.S. Sen. Edward Markey says ISEC “promises to be the hub of scientific breakthroughs and innovative engineering for years to come.”

He notes that Northeastern is helping create the 21st-century infrastructure in areas such as renewable energy, transportation, communications, health systems, climate change, coastal sustainability, and cybersecurity. “It’s all going to be housed here in one building,” he said. He also highlights Northeastern’s world-renowned co-op program, and that many students have worked in his offices in Massachusetts and Washington.

“Part of what makes Northeastern so special is that it works to ensure students are prepared to join the 21st-century workplace when they graduate,” he says.